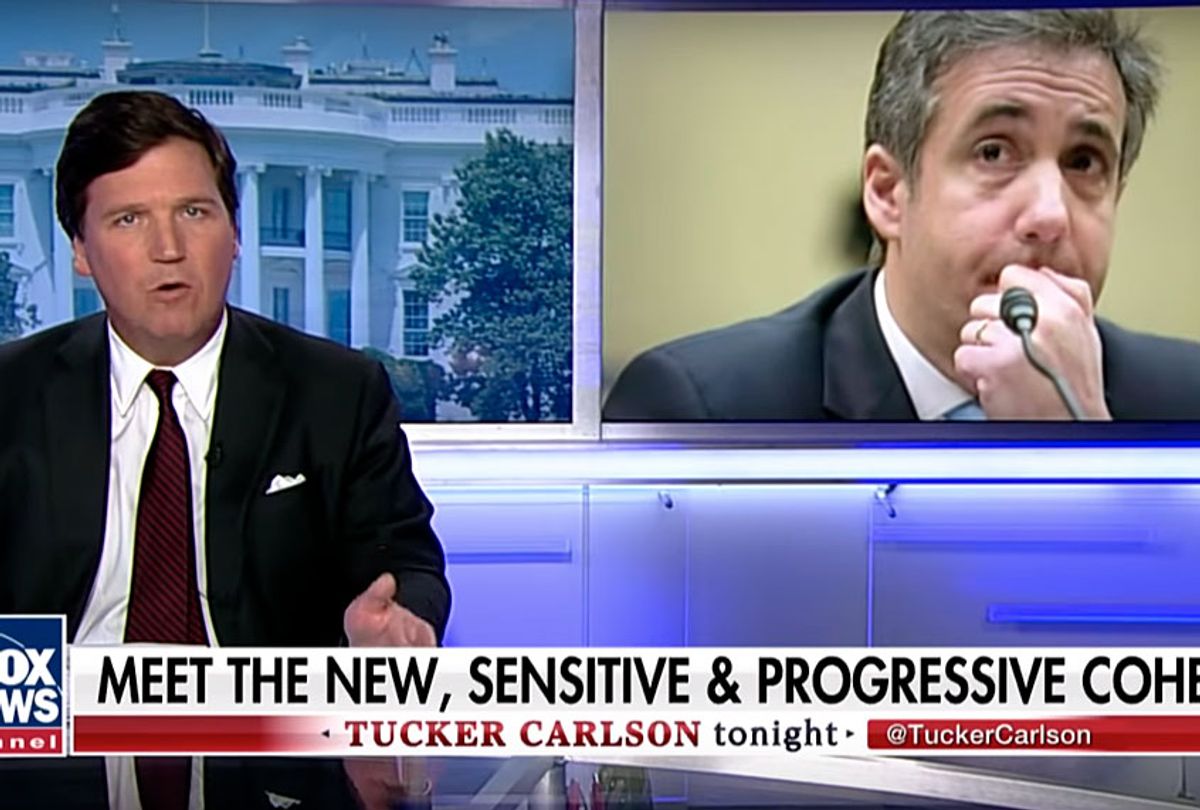 "Michael Cohen spent a decade as Trump's high-profile lobbier, toadie, defender and personal attorney, and then one day," Carlson claimed, "he decided that he hated Donald Trump and became Donald Trump's mortal enemy."

"A big change. How did that happen?" the conservative cable news host asked. "Well, Cohen told Congress this week that he had a kind of road to Damascus experience. He was personally and morally offended by what his boss said in two occasions."

Carlson then recalled Cohen's testimony earlier this week before the House Oversight and Government Reform Committee, in which the former lawyer revealed that Trump's July 2018 remarks at a meeting with Russian President Vladimir Putin in Helsinki, Finland, as well as the president's response to a deadly white supremacist rally in Charlottesville, Virginia in Aug. 2017 were the "breaking point" in his relationship with Trump.

"There are several factors," Cohen said. "Helsinki, Charlottesville, watching the daily destruction of our civility to one another, putting up with silly things like this. It's really unbecoming of Congress."

Cohen added that he blames himself for helping Trump erode "civility" and pointed to a sign in the hearing room as an example. Rep. Paul Gosar, R-Ariz., literally brought a poster he had made of Cohen's face with the caption "Liar, liar, pants on fire" as a prop.

"It's that sort of behavior that I'm responsible for," Cohen said. "I'm responsible for your silliness. I did the same thing you are doing now. I protected Mr. Trump for ten years . . . I can only warn people: the more people that follow Mr. Trump as I did, blindly, are going to suffer the same consequences that I'm suffering."

Trump was widely criticized for accepting Putin's denial of interference in the 2016 election during the Helsinki press conference with the two leaders. The president's statements came after U.S. intelligence agencies concluded that Moscow sought to skew the 2016 election to benefit Trump. Meanwhile in regards to Charlottesville, Trump expressed sympathy for white supremacist marchers and infamously argued "there's blame on both sides" in the wake of the violence spawned by neo-Nazis and white nationalists. His response came under intense scrutiny and drew accusations of racism from the president's critics and political observers.

Those two events, Carlson claimed on Thursday, were "fraudulent, entirely manufactured by the left and its servants in the media." They "changed Michael Cohen's mind forever," he continued.

"Democrats must have been gratified to hear that. Michael Cohen is a sensitive progressive now. He is tormented by climate change and his own toxic masculinity. He's basically a one man crusade against privilege," Carlson added.