Why does Rep. Mark Meadows represent a city full of vegans and liberals? Thanks, gerrymander!

Republicans "cracked" the liberal city of Asheville into two safe districts, and elected a right-wing buffoon 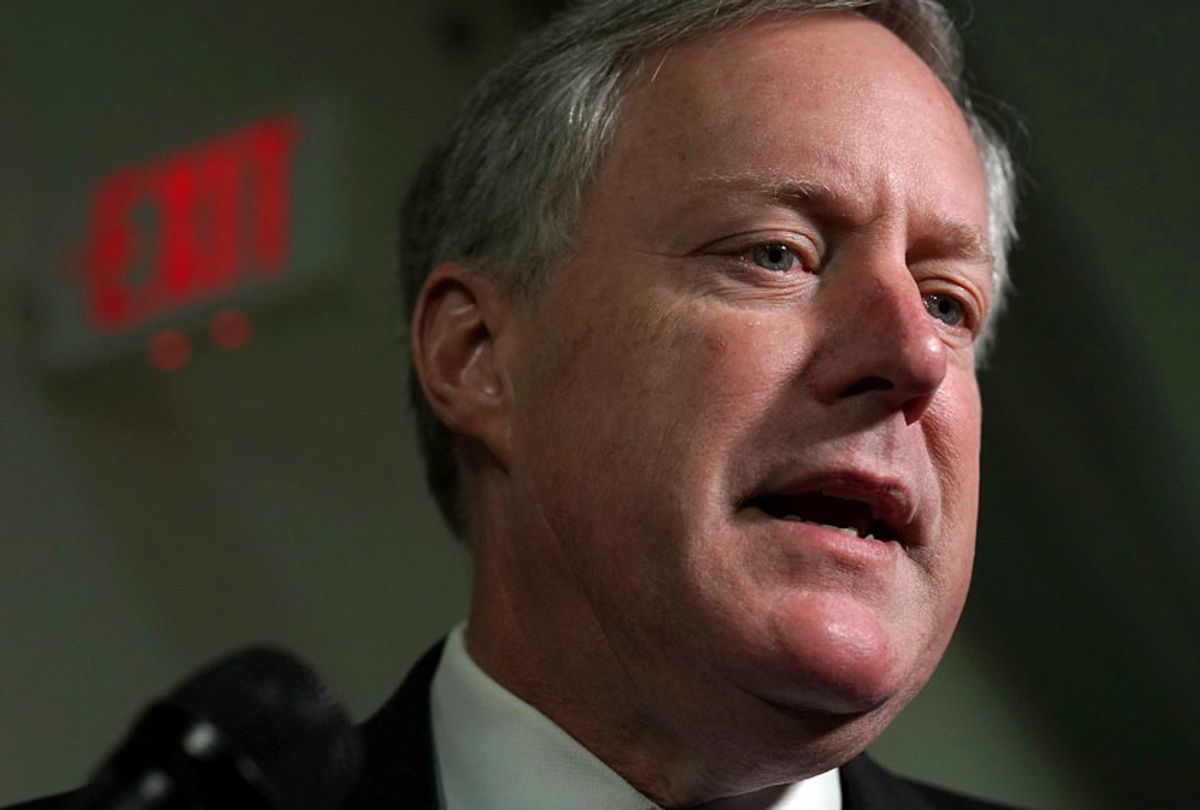 Rep. Mark Meadows, R-N.C. almost managed to upstage the circus of last week’s congressional testimony by former Donald Trump “fixer” Michael Cohen with an ugly racist stunt: He insisted that the president could not be racist because he employed a black woman, then produced and pointed to her like a human political prop.

That Meadows grabbed the spotlight with another breathtaking move from the far right playbook comes as no surprise to those who have followed his rise from small-town sandwich shop owner to congressional power-broker and chairman of the House Freedom Caucus. Meadows won his seat, after all, by flirting with birtherism and vowing “we will send Obama back home to Kenya or wherever it is.”

As Salon's Shira Tarlo recently wrote, Meadows also said during his 2012 campaign that Sharia law was "taking over the British Parliament." As recently as 2015, he told an interviewer for a Jewish publication that Hezbollah, the Lebanese militia group backed by Iran, was "everywhere" in North America, and was involved in "drug and tobacco trafficking in North Carolina." (To state what ought to be obvious, none of those claims has any basis in fact.

Once elected to Congress, Meadows forced out then-Speaker John Boehner for the sin of being insufficiently conservative; he filed a “motion to vacate,” essentially a parliamentary motion of no confidence, that Boehner knew he was unlikely to survive. During Barack Obama’s presidency, Meadows pushed dozens of Obamacare repeal votes, and even manufactured the 2013 government shutdown as part of his failed strategy to defund the Affordable Care Act.

Then, in 2017, with his dream in sight, Donald Trump in the White House and the GOP in unified control of Congress, Meadows scuttled Paul Ryan’s repeal-and-replace effort, deeming it also to be fatally impure. Meadows and his House Freedom Caucus followers insisted that Ryan’s bill also scrap an Obamacare requirement that insurers cover 10 “essential health benefits,” including maternity and mental health care.

Here’s what might be surprising about Mark Meadows: The largest city in his western North Carolina district is Asheville, the funky college town home to art galleries, vegan cafés and feminist bookstores. Rep. Alexandria Ocasio-Cortez’s Green New Deal would be extraordinarily popular public policy in Asheville, which became the first city in America certified as a Green Dining Destination for its number of eco-friendly restaurants. The city council even passed a Zero Waste Initiative aimed at reducing Asheville’s carbon footprint by 80 percent over this decade.

How is it possible that Asheville is represented by not just one but two of the most conservative lawmakers in Congress? Mark Meadows owes his seat in Congress -- and his outsized role in American politics, shaping shutdowns, health care policy and national leadership that affect us all -- to gerrymandering.

Republicans controlled the redrawing of North Carolina’s 13 congressional districts after the 2010 census, and the legislator in charge of the process determined “that we draw the maps to give a partisan advantage to 10 Republicans and three Democrats, because I do not believe it’s possible to draw a map with 11 Republicans and two Democrats.”

It would require more than a million dollars in dark money and the handiwork of the GOP’s most notorious partisan mapmaker, but Republicans did manage to surgically craft a 10-3 map in a state so purple that it voted for Donald Trump even as it was electing a Democratic governor in 2016. (Mitt Romney narrowly carried the state in 2012; Obama did so in 2008.)

Democrats have not flipped a North Carolina congressional seat blue this entire decade. Courts have overturned these maps as both an unconstitutional partisan and racial gerrymander, but their replacements have only cinched GOP control tighter. And all this Republican dominance starts in Asheville.

Republicans “cracked” liberal Asheville in half -- dividing the city into two congressional districts in order to dilute this large pocket of Democratic votes. North Carolina's 10th district is represented by conservative Republican Patrick McHenry, while the 11th is represented by the even more conservative Meadows. This technique essentially neuters the political influence of a mid-sized but intensely liberal city and silences thousands of Democratic voters. The district line is so jagged that the League of Women Voters sponsored an insanely twisty “Gerry Meander” 5K through neighborhoods intentionally divided to preserve Republican power and end any notion of competitive congressional elections.

As we saw this week, not for the first time, the influence of that line can be felt far outside the streets of Asheville. Before Republicans redrew these lines, the 11th had been a highly competitive district that regularly seesawed between both parties. Former NFL quarterback Heath Shuler, who held the seat before Meadows, may have been the perfect fit: a moderate to conservative Blue Dog Democrat who supported gun rights and opposed abortion, yet received the highest scores of any western North Carolina legislator from the League of Conservation Voters. His nuanced approach suited the 11th: Even in the 2010 Tea Party wave, Shuler won reelection by 21,000 votes and a 54.3 to 45.7 margin.

Shuler took one look at the new lines before the 2012 election and knew he was finished. He did not seek re-election. The new 11th established a safe Republican district for a different kind of conservative. A competitive seat was wiped off the board; the most important election here now was the Republican primary, which explains why Meadows ran in 2012 as a birther who repeatedly questioned Obama’s citizenship and tried out various other conspiracy theories.

He won with 57 percent of the vote in 2012, and has won with between 59 and 64 percent of the vote in the three elections since then. He hasn’t even faced a credible challenger. Meadows’ 2018 opponent had multiple arrests involving drugs, drinking and driving, and struggled to raise even one-sixth of the congressman’s war chest.

North Carolina’s tilted maps will be back before the U.S. Supreme Court this month, as the high court once again considers whether partisan gerrymandering violates the U.S. Constitution. Meanwhile, our broken redistricting process continues to protect Republicans in North Carolina and many other swing states that the GOP similarly rewired after the 2010 elections. Last fall, the blue wave was strong enough in North Carolina to wash away the Republicans’ gerrymandered supermajorities in the state House and Senate -- but a 50/50 split in the congressional popular vote once again resulted in 10 Republican victories. (North Carolina’s 9th district race, of course, will apparently be re-run thanks to widespread election fraud on behalf of Mark Harris, the GOP victor.)

The Supreme Court’s conservative majority has looked skeptically at partisan gerrymandering claims in the past, not eager to be drawn into the sticky business of judging the fairness of maps, and of how much politics is too much politics when it comes to redistricting. Let’s hope they were watching the spectacle that Meadows and Freedom Caucus colleague Jim Jordan, himself the beneficiary of a gerrymandered Ohio district, made out of a congressional hearing that examined whether the president of the United States had committed felonies while in office.

Political scientists might debate the role that gerrymandering, among other factors, plays in making our politics more polarized and extreme, but there should be little question that lines drawn to entrench a Republican in North Carolina’s 11th, and elsewhere, have had a profound and distorting effect. Voters in five states reined in partisan gerrymandering through initiatives last November. Politicians in Virginia and elsewhere have heard that message and considered important statewide reforms; national Democrats even made nonpartisan redistricting part of the For the People Act, the first bill introduced by the new House majority.

But there’s no reason this should be a partisan issue: We should all agree that the Big Data and sophisticated mapmaking software that makes it possible to turn evenly divided states into an unshakable 10-3 majority for either side harms democracy itself. When district lines are drawn to elect members of only one party, politicians like Meadows -- with a different set of incentives, hermetically sealed from compromise and competition, siloed in a partisan media bubble -- get sent to Washington. Our current dysfunction is the result.