"I may be the only person in the country who supports both Donald Trump" and Ocasio-Cortez, Geraldo Rivera says 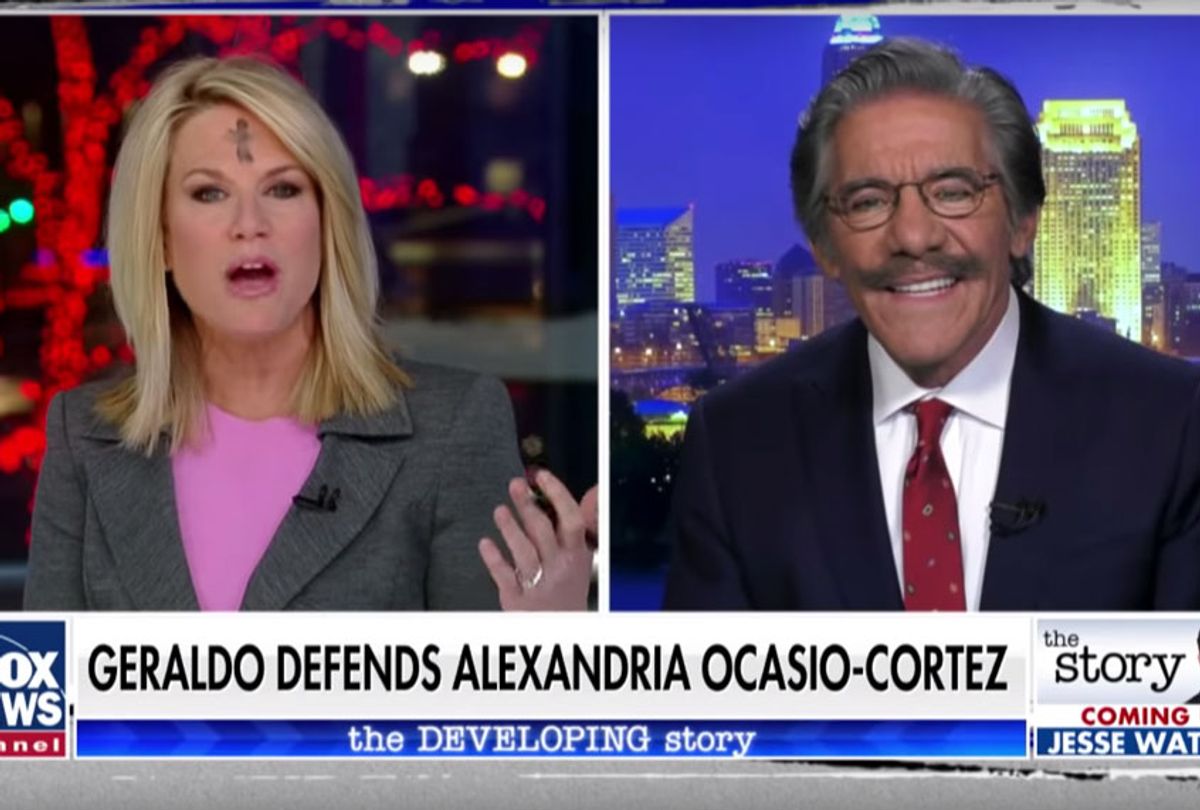 For the second day in a row, Fox News correspondent-at-large Geraldo Rivera defended Rep. Alexandria Ocasio-Cortez, D-N.Y., a frequent target of criticism on the conservative network.

"I may be the only person in the country who supports both Donald Trump and Alexandria Ocasio-Cortez," Rivera told host Martha MacCallum on Wednesday night, calling the freshman congresswoman "a tremendous inspiration to young people."

"She has been a tremendous inspiration to young people," he said. "She has gotten this whiny millennial generation off the couches in their mothers' basements and instilled in them the possibility that they maybe could even be more successful than their parents."

Rivera then blasted the "bogus" talking points used against Ocasio-Cortez, including the ones getting plenty of air time Fox News.

"To be so harsh on her, as if the Green New Deal was going to be legislation that's going to go into effect, and cows can't fart and airplanes can't fly – I think that that is a bogus way of looking at her and the class that she represents," he said, referring to the ambitious environmental and economic proposal introduced by Ocasio-Cortez and Sen. Ed Markey, D-Mass., to combat the threat of climate change. "This is the most diverse – it is in many ways the youngest– it is the most integrated Congress we've ever had. Let them express these ideas."

"Maybe this generation is waking up the way mine did," Rivera continued. "Maybe we fell asleep, and now we've passed the baton in our dreams to this next feisty generation. Let them make their mistakes, but let them try to do something."

Rivera's passionate defense of the New York Democrat came just one night after he told Fox News host Sean Hannity that he "feels pride" in Ocasio-Cortez, the youngest woman ever elected to Congress.

"She's me at the age of 26," Rivera told Hannity, recalling his own activism in the 1960s when he took part in protests and was arrested. "She may have the most far-fetched ideas that are totally implausible or impractical, but she has heart."

During the show's broadcast, Rivera took to Twitter, where he said Ocasio-Cortez has "caught fire" because of "her charismatic empathy."

"Her ideas may be far out,” he tweeted, "but they are sincere & aspirational — she has become de facto leader of Democrats because she has a pulse."

Rivera then encouraged his Twitter followers to tune in to Hannity's primetime show "to hear my defense of homegirl @AOC."

Ocasio-Cortez has emerged as a national progressive firebrand since she was sworn into the 116th Congress in January, capturing the attention of Americans of all political stripes. Along the way, the self-described "democratic socialist" has become a near constant target of the Republican Party's attacks and smears, often drawing the ire of conservative hosts on Fox News, who have questioned Ocasio-Cortez's age and her ability to make policy decisions.

The New York Democrat has occasionally received a less-than-warm reception on Capitol Hill from fellow Democrats, especially over her vow to back primary challengers against party incumbents.