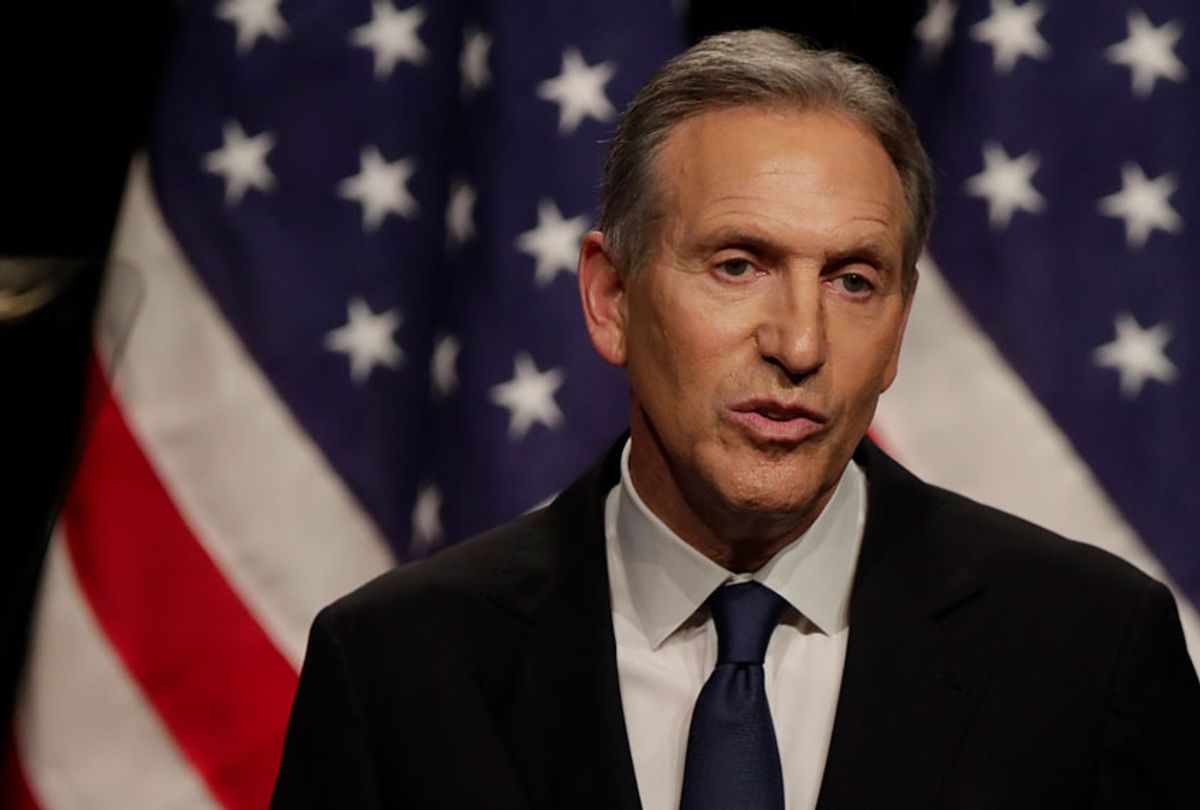 Former Starbucks CEO Howard Schultz released a public pledge on Wednesday declaring that, if he is elected to the presidency in 2020, he will try to run America on a basic principle of bipartisanship.

The pledge, which Schultz outlined during an upcoming speech at Miami Dade College on Wednesday, focuses on trying to foster bipartisanship in the United States.

“I would not sign any legislation — none — into law that does not have bipartisan support,” Schultz said. “We need to be candid with the American people and admit, yes, that both sides have good ideas if we work together.”

Until now, NBC News' Dylan Byers noted, Schultz has made headlines for his opposition to policies and proposals, not a unique agenda. "He has run on an aggressive critique of the two-party system but offered little in the way of specific promises,"  Beyers reported.

Schultz, who has never held political office, said on Wednesday: “I will do everything I can to fight for the center, where the vast majority of Americans stand.”

As Byers reports, "Schultz's thesis is that there is widespread consensus among Americans on a majority of policy issues, even if that is not reflected in the national political conversation — an idea legal scholar Tim Wu describes as 'the oppression of the supermajority.'"

Schultz also promised not to appoint Supreme Court justices unless they have bipartisan support or are backed by two-thirds of the Senate, respectively. He said he would appoint Republicans, Democrats and independents to his Cabinet, which he said would also include more women than in any previous administration.

Other policy priorities he outlined on Wednesday included the elimination of gerrymandering and create a fair system for apportioning legislative power; rein in the federal budget; limit the power of lobbyists; and curtail the power of the executive branch. Schultz plans to lay out the details of his policy program over the next few weeks in order to distinguish himself from the Democratic candidates running against President Donald Trump.

Schultz has harshly criticized left-wing Democrats like Rep. Alexandria Ocasio-Cortez of New York, arguing that policies like the Green New Deal are "immoral" and "not realistic." He has described himself as a "centrist independent" and claimed, when discussing race issues, that "as somebody who grew up in a very diverse background as a young boy, in the projects, I didn't see color as a young boy, and I honestly don't see color now." He has said in the past that he and other wealthy people should pay more in taxes, but also criticized Ocasio-Cortez's proposal of a 70 percent marginal tax rate as "punitive." As CEO of Starbucks, Schultz identified himself with liberal social positions on issues like gay rights, and required the employees to undergo anti-bias training after one Starbucks location discriminated against African Americans. At the same time, he has also been known to use his power in ways that seem to go against liberal values, such as when he built a driveway to his house through a park in Seattle.