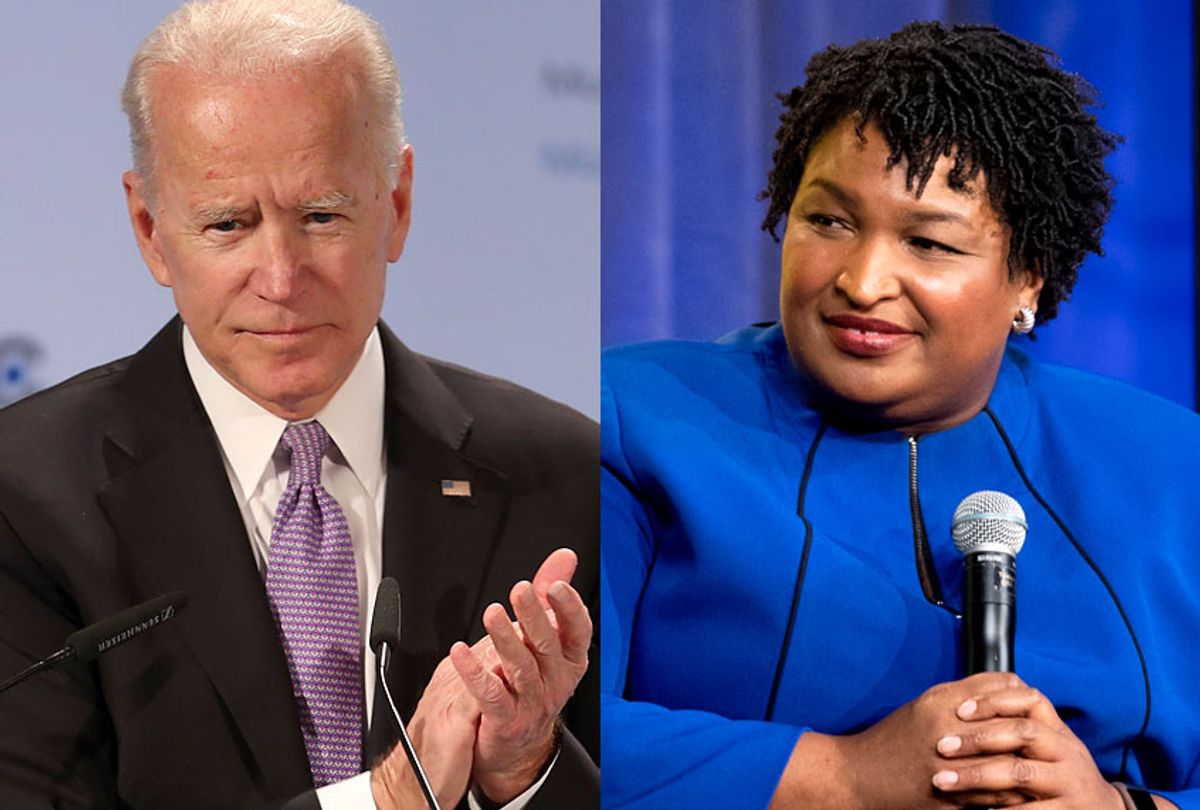 Former Vice President Joe Biden had a private meeting with former Georgia House Minority Leader Stacey Abrams on Thursday, prompting speculation about the implications of that conversation for each one's potential presidential candidacy.

A source close to Abrams confirmed the meeting and said that it occurred at Biden's request, according to the Associated Press. The meeting is significant because Biden represents the moderate, establishment wing of the Democratic Party and is widely expected to be an instant frontrunner if he decides to seek the presidential nomination in 2020. Abrams, by contrast, has run as an unabashed progressive and, because her most significant public office was that of a state legislator, she would normally not be considered as a viable presidential contender. That said, Abrams' defeat at the hands of Republican Brian Kemp during last year's gubernatorial election was widely viewed as tainted due to rampant voter suppression, and Abrams' star has risen within the party to the point where she delivered a response to President Donald Trump's State of the Union address earlier this year.

Abrams has admitted to having a possible interest in the presidential race, but less so in running for the Senate. As she told the AP, "My objective is to make sure I want to do that job, and because I’d not thought about the Senate before — it had never been in my list of considerations."

She added, "The Senate is a different way to tackle the issues I see. It is a continuation of my legislative work, which I appreciated, but it’s an indirect solution to some of the challenges I see."

Regarding the presidency, however, Abrams tweeted earlier this week that "in #LeadFromTheOutside, I explore how to be intentional about plans, but flexible enough to adapt. 20 years ago, I never thought I’d be ready to run for POTUS before 2028. But life comes at you fast - as I shared in Q&A w @Yamiche at @sxsw. Now 2020 is definitely on the table..."

Biden's potential candidacy comes with challenges of its own. During his Senate career he took many positions that are out of step with the modern Democratic Party, such as by supporting a controversial 1993 crime bill that critics believe exacerbated America's mass incarceration crisis, opposing antitrust legislation, initially opposing Roe v. Wade and supporting Ronald Reagan's policies on tax reductions for the wealthy and putting a freeze on Social Security spending. Despite these drawbacks, though, Biden has also benefited from the good will resulting from his close friendship with former President Barack Obama, who remains a beloved figure in the Democratic Party.