Beto O'Rourke, Ilhan Omar and the Democratic future: Time to kill off the ghosts of the past

Democrats have a chance to shed their cautious, defensive past and seize the future. History suggests they won't 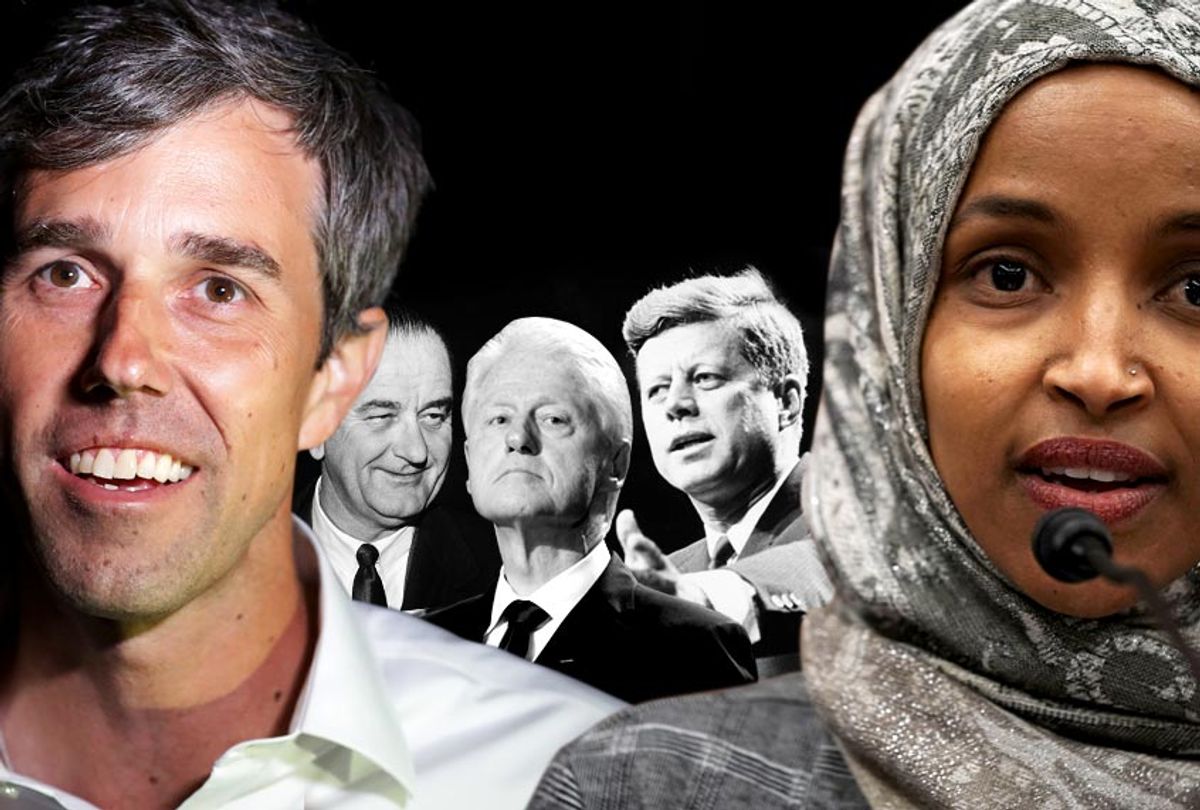 We may finally have arrived at the point, at the end of the warm, wet winter of 2019, when even the most cynical observers of American politics must admit that the presidency of Donald Trump presents an urgent and unprecedented crisis.

I would count myself among the cynical-observer camp, at least in the sense that I have repeatedly argued that Trump was a symptom of the disease eating away at American democracy, not the disease itself. That’s in opposition to what we might call the “Stephen Colbert hypothesis,” which is that Trump’s election was a fluke anomaly, catalyzed by a uniquely polarizing and toxic figure, and once we get rid of him things will go back to the so-called normal conditions of 2015 and earlier.

I still believe this is an important truth: There is no “normal” to go back to, and nothing about that period was normal anyway. It wasn’t Donald Trump who blocked the Supreme Court nomination of Merrick Garland, or who invaded Iraq under false pretenses, authorized the torture program and the “black sites,” ordered the drone killings of U.S. citizens on secret evidence, or allowed Wall Street bankers to cover up their massive crimes. Of course it was always ludicrous to believe that Trump was opposed to such things, but his anti-Establishment rhetoric, in the true fascist tradition, allowed his supporters to pretend that he might be.

It has struck me all along that both major political parties in the U.S. are collapsing or imploding in generally similar ways, even if one of them is a whole lot uglier than the other. In the last year or so, it has required willful collective blindness among the media and political classes not to see that the crisis of democratic legitimacy has effectively spread worldwide, infecting virtually every major Western nation and a bunch of others besides. If the Brexit tragicomedy and the Yellow Vest protests in France are the most obvious signs of that, they’re definitely not alone. We stand at an inflection point in history, with the future shrouded in darkness. Revolution, tyranny or collapse may lie ahead, and in all likelihood some combination of the three.

All that said, the real-world choices confronting Americans in the near term are limited. We cannot vote to dismantle capitalism, rewrite history or correct all forms of injustice in 2020, and our nation is not given to thinking in such grandiose terms. In a week when a self-professed fascist murdered more than four dozen Muslims at prayer in a nation on the other side of the world -- specifically in tribute to Donald Trump, “symbol of renewed white identity” – it is time to consider the course corrections available to us, not just the future we dare to imagine.

This kind of recommendation is a double-edged sword. Believe me, I feel its bite. Telling progressives and leftists that they must support the Democratic Party no matter how cravenly it grovels, compromises and capitulates — and then blaming them for its defeats — is a ritual dance that long predates Bernie vs. Hillary, or Ralph Nader vs. Al Gore. My mother worked on former Vice President Henry Wallace’s third-party campaign in 1948, which was blamed in advance for Harry Truman’s presumptive defeat by Republican Thomas Dewey. (You will note that said defeat did not actually happen.)

Well, here we are again. With Robert Mueller’s report on the 2016 election expected to drop at any moment and the 2020 campaign entering its initial stages, the Democratic Party remains the only political institution positioned to limit, defeat or (hypothetically) overthrow the incipient fascist regime of the Trump administration.

Somehow the party’s proverbial “big tent” must encompass both Rep. Ilhan Omar and former Rep. Beto O’Rourke, two of its most charismatic younger faces, along with the two senior citizens at the head of the 2020 candidate list, Sen. Bernie Sanders and former Vice President Joe Biden. Having scored a major victory in the 2018 midterms — almost solely on the premise that they’re not the party of Trump — the Democrats must now calculate whether that’s enough to win the White House and the Senate in 2020. Which leaves a much bigger question unanswered: Will a Sanders or Biden or O’Rourke or Kamala Harris presidency actually do anything to redeem or renew democracy, or is this a classic case of rearranging the deck chairs while the iceberg slices open the engine room?

It’s clearly no coincidence that the Democratic Party has been consumed by its own internal dramas since 2016, with the rise of the insurgent left and a potential candidate field that could be larger than the Republican clown show that brought us Donald Trump three years ago. Whether Democratic leaders and their supporters are remotely up to their historical task, or even understand the true nature of the problem — as Chris Hedges recently suggested to Salon’s Chauncey DeVega — remains to be seen.

At this early stage, public opinion polls suggest that a large preponderance of Democratic voters are inclined to vote for “back to normal” and will support whomever they believe can defeat Trump. We sometimes forget that party primary voters, a distinctive and historically cautious subset of the population, are the people who ultimately choose the nominee. (Whatever you make of the Democratic leadership’s overt favoritism toward Hillary Clinton in 2016, which may have tilted the playing field somewhat, the fact remains that she got significantly more votes than Bernie Sanders did.)

As Salon’s Amanda Marcotte recently explored, this perceived pragmatism and desire for “electability” tends to favor certain kinds of candidates who are understood as moderate, unthreatening and not overtly ideological: Michael Dukakis in 1988, Gore in 2000, John Kerry in 2004, Clinton in 2016. What else do those four nominees have in common? I doubt I need to spell it out.

Perhaps the fairest thing to say (as Amanda’s article pretty much does) is that we have no idea what would happen if Democrats chose a more overtly populist or progressive nominee. Setting aside the ambiguous case of Barack Obama, they have not done so since the doomed George McGovern campaign of 1972, an epochal event that took place in a vastly different country under vastly different circumstances, but that continues to haunt the party, Marley’s ghost-style, to this day.

Indeed, I believe the real challenge facing the Democratic Party in 2020 and the years ahead is not about progressives vs. moderates or about endlessly re-litigating the Bernie-Hillary wars of 2016, which seemed massively important to over-invested political junkies in the Twitterverse and somewhat baffling to regular Democratic voters. It’s about whether the party can finally free itself of the ghosts of the past, which have rendered it fearful, defensive and endlessly apologetic for the last 50 years.

That’s where Ilhan Omar and Beto O’Rourke come in. They clearly represent different wings of the party and different ideological factions, but neither of them seems overwhelmed or possessed by traumas out of the Democratic past. It’s not bashing O’Rourke to say that his record in Congress is clearly that of a moderate, red-state Democrat, eager to avoid labels, strike compromises with business interests and focus on winnable battles. As one of only two Muslim women in Congress, Omar was always going to be a flashpoint for conservative paranoia, and if anything she has embraced that role as one of a handful of young progressives pushing the Democratic caucus notably to the left.

O’Rourke is a complicated character, and to be clear I am not covertly endorsing him (nor do I believe he’s likely to be the 2020 nominee). He has come under fire from the left, with some justification, for his lack of progressive credentials and his intentionally vague policy proposals. We’ll certainly hear much more of that now that he’s officially entered the race.

But even if O'Rourke sometimes seems like a lab-grown, punk-inflected hybrid of Bill Clinton and Barack Obama, his politics are activist in tone and style. He supports pluralism, social justice and government action (albeit without many specifics) and speaks glowingly of Sanders’ Medicare for All proposal and Alexandria Ocasio-Cortez’s Green New Deal (without exactly endorsing them). He’s the first affirmative moderate to emerge within the party in many years, after decades of middle-road Democrats who compulsively attacked the left, refused to embrace anything beyond the most anodyne and incremental reforms and eagerly agreed with as many Republican ideas as possible.

Ilhan Omar isn’t running for president, but I expect her impact on the party’s future to be much more profound than O’Rourke’s. In violating the Democratic taboo on discussing the U.S.-Israeli relationship in anything but the most fulsome terms, she must have known she would come under attack. What she proved — and what the rest of the party learned — was that it was no longer acceptable to declare that subject off limits. I recognize that many people genuinely perceived Omar's remarks as informed by toxic, anti-Semitic stereotypes. But I think the much larger point is that the neoliberal consensus that drove Democratic politics for decades — meaning austerity economics at home and a belligerent, one-sided foreign policy abroad — is now up for debate to a degree that hasn't been possible since at least the 1970s.

There remain many ways that the 2020 campaign could go catastrophically wrong for the Democrats or, even more plausibly, could result in a "victory" that accomplishes very little. The aforementioned voter appetite for safety, normalcy and caution presumably favors the genial frontrunner-in-waiting, who hasn’t yet officially joined the race and whose primary qualification is his eight-year gig as sidekick to the previous president.

In every other respect, including his troubled record on race relations and gender justice and his opposition to nearly everything that progressive Democrats want, Joe Biden seems like a candidate dramatically out of step with both his own party and the nation. Indeed, his only plausible appeal lies in the patently false claim that there’s some pre-Trumpian state of congenial, bipartisan politics that we can return to — and that it would be worth getting there if we could.

It would be the most Democratic Party thing ever to pick a nominee who is deeply distasteful to the progressive base, win a narrow electoral victory by peeling off a thin slice of Rust Belt white folks and marginally increasing African-American turnout, attempt to rebuild the Bill Clinton administration atop the smoldering ruins left by Trump, and unconvincingly claim that the republic has been saved. It won't have been, of course -- but that outcome strikes me as more likely than not.

There is obviously no point in trying to game out what will happen to a candidate who isn’t running yet in a race that hasn’t started. It may be that all that can realistically be accomplished in the 2020 election is hitting the pause button, or slowing rather than stopping the political and civic decay of our republic. Democrats have an energy and momentum they haven’t possessed since before the Reagan administration. Their potential future, and the nation's is visible just ahead of us, slightly out of reach. Can they seize it before it’s too late?