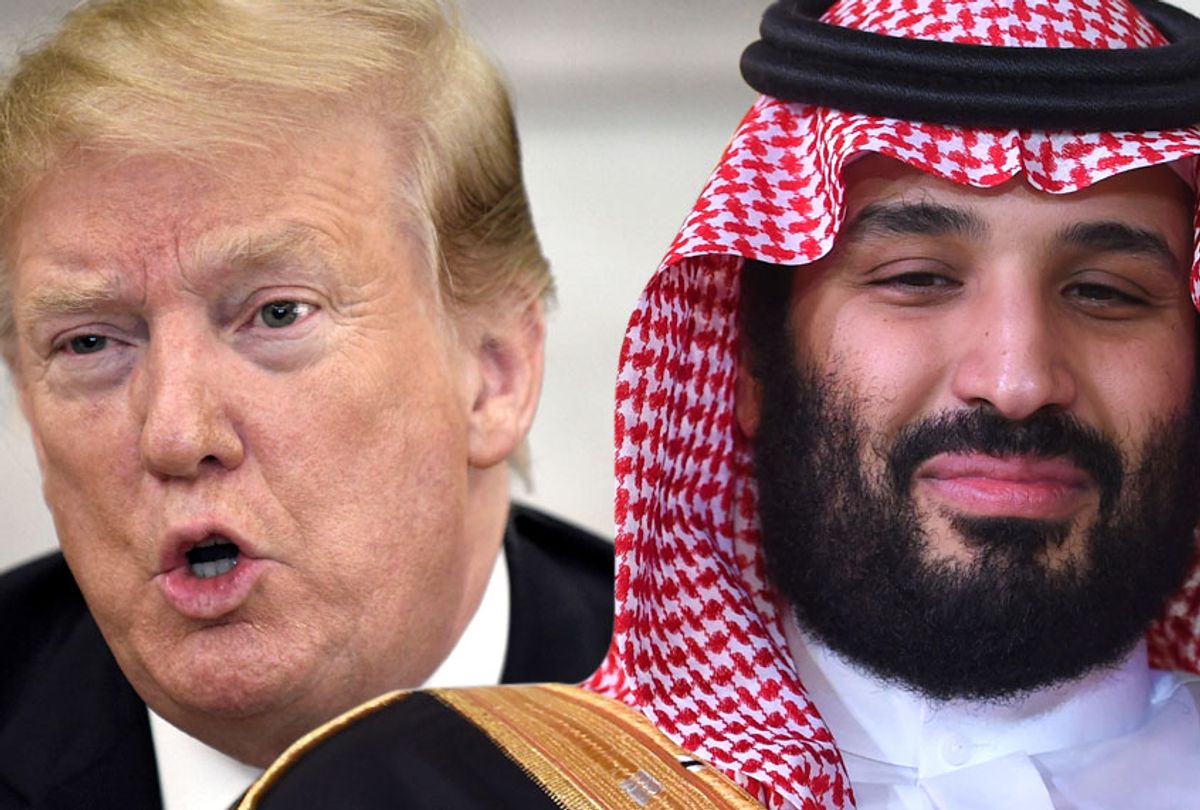 A new report reveals that Crown Prince Mohammed bin Salman kept his anti-dissident death squad so busy in 2018 that its members requested bonuses.

This is one of many revelations about the extent of Prince Mohammed's use of the hit squad reported Monday by the New York Times. According to the article, Mohammed's alleged ordering of the murder and dismemberment of Washington Post journalist Jamal Khashoggi in October was only one part of a larger campaign to silence dissidents. Dubbed the Saudi Rapid Intervention Group by American officials, the group is believed to have been involved in at least a dozen violent campaigns starting in 2017. Their actions ranged from forcibly repatriating Saudi Arabians who had fled to other countries to torturing prisoners in palaces owned by Mohammed bin Salman and his father, King Salman. On one occasion, a university professor who had written about the status of women in Saudi Arabia attempted suicide due to the extreme psychological torture she had experienced.

Although in theory Saudi Arabian law prohibits torture, that apparently hasn't dissuaded the prince known around the world as MBS from allegedly ordering and endorsing the practice. Yet the prince's power may now be diminishing, according to a recent report by the Guardian. MBS has not been involved in recent important ministerial and diplomatic meetings over the past two weeks, that article reports, and has also lost some of his authority over financial and economic matters. While this diminution of his power may only be temporary, it is nevertheless significant given that he had been seen as the dominant figure in the Saudi monarchy.

King Salman reportedly informed a group of senior ministers that his son had been stripped of some of his authority early last week. Although MBS had been invited to attend the meeting where this announcement was made, he did not show up.

President Trump has not responded to the recent reports about Saudi Arabia's human rights violations, even though he has been vocal in the past in defending Saudi Arabia's royalty against the assertions of American intelligence officials. After the murder of Khashoggi prompted many Capitol Hill legislators, including several Republicans, to call for a re-evaluation of America's relationship with Saudi Arabia, Trump defended the country's controversial war against Yemen, saying, "Saudi Arabia would gladly withdraw from Yemen if the Iranians would agree to leave. They would immediately provide desperately needed humanitarian assistance. Additionally, Saudi Arabia has agreed to spend billions of dollars in leading the fight against Radical Islamic Terrorism."

Trump also defended the crown prince against the accusations that he had ordered Khashoggi's murder, saying, "King Salman and Crown Prince Mohammad bin Salman vigorously deny any knowledge of the planning or execution of the murder of Mr. Khashoggi. Our intelligence agencies continue to assess all information, but it could very well be that the Crown Prince had knowledge of this tragic event -- maybe he did and maybe he didn't!"

It was later revealed that Trump's son-in-law Jared Kushner, who is also one of the president's top advisers, has continued to stay in touch with MBS despite his alleged role in the Khashoggi killing.

Congress voted last week to end America's support for the Saudi war in Yemen, a move that might result in Trump issuing the second legislative veto of his presidency, only days after the first.