After Border Patrol agents detained a 40-year-old Mexican man, he died while in their custody 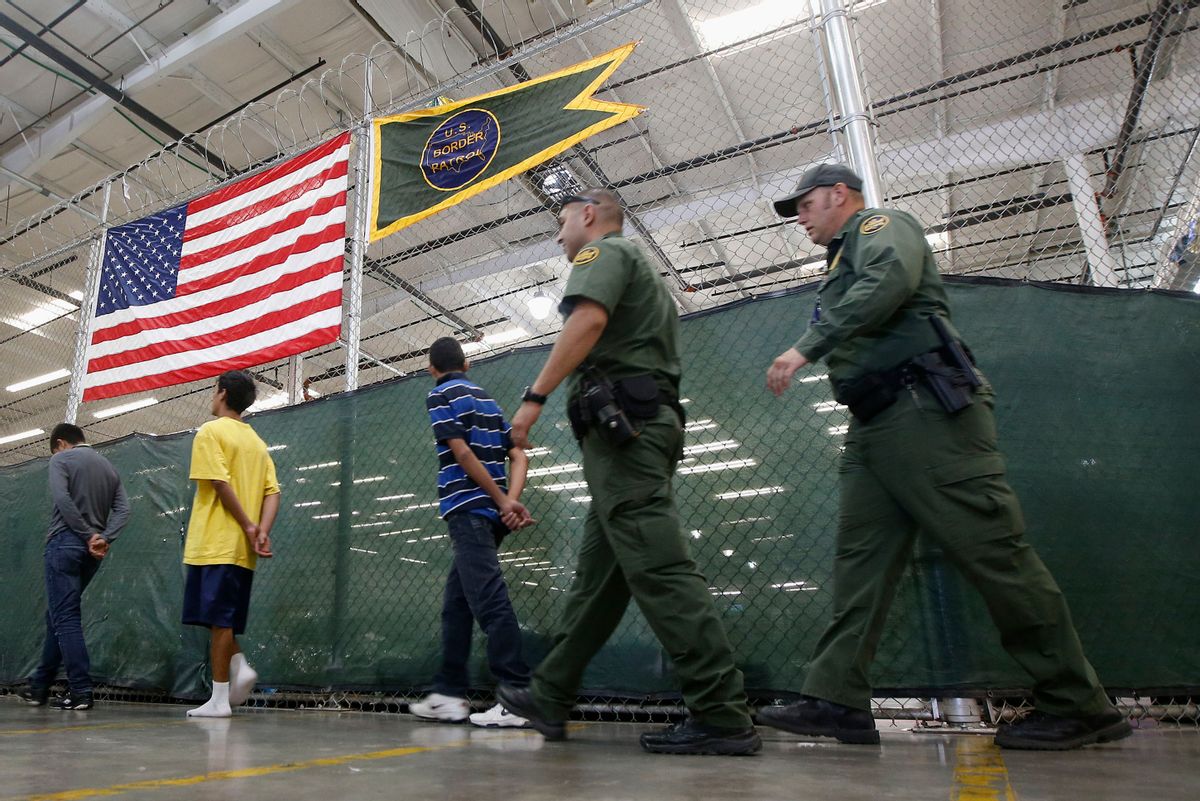 Detainees are escorted to an area to make phone calls as hundreds of mostly Central American immigrant children are being processed and held at the U.S. Customs and Border Protection Nogales Placement Center on Wednesday, June 18, 2014, in Nogales, Ariz. CPB provided media tours Wednesday of two locations in Brownsville, Texas, and Nogales, that have been central to processing the more than 47,000 unaccompanied children who have entered the country illegally since Oct. 1. (AP Photo/Ross D. Franklin, Pool) (AP)
--

On the same day that the U.S. Supreme Court ruled along ideological lines that the government may indefinitely detain — without a hearing — noncitizen immigrants, the government announced that yet another immigrant in U.S. custody died.

A Mexican national died while in the custody of border patrol agents earlier this week. The 40-year-old man was reportedly apprehended by Border Patrol agents on March 17 near the Bridge of the Americas in El Paso as he attempted to illegally re-enter the United States following a previous deportation, according to an official notice by U. S. Customs and Border Protection.

The individual in question was later evaluated by medical personnel near the Paso Del Norte Port of Entry at the Border Patrol's processing facility. Because he was diagnosed with flu-like symptoms, liver failure and renal failure, he was moved to Las Palmas Medical Center to receive emergency care. Despite receiving potentially life-saving medical treatment, he died later that same day.

“Our thoughts and prayers go out to the family and his loved ones," Andrew Meehan, Assistant Commissioner for Public Affairs, U.S. Customs and Border Protection, said in a statement. "CBP remains committed to ensuring the safe, humane and dignified treatment of those within the care of our custody. Consistent with CBP policy, CBP’s Office of Professional Responsibility has initiated a review. The Department of Homeland Security Office of the Inspector General and the Government of Mexico has been notified."

He added, "At this time, CBP is not releasing the identity of the individual. CBP will release more details as available and appropriate, and will ensure an independent and thorough review of the circumstances."

This isn't the first time that an undocumented immigrant has died while in the custody of Border Patrol agents.

A 7-year-old girl from Guatemala, Jakelin Caal Maquin, who died in their custody last year. As of January, 22 immigrants had died over a period of two years while being detained in America's detention centers for immigrants, according to NBC News. They included a 33-year-old transgender woman from Honduras named Roxana Hernandez, but did not include either Maquin or Felipe Alonzo-Gomez, an 8-year-old boy from Guatemala.

Trump's draconian anti-immigration policy has been particularly criticized for separating parents from children and in general being abusive toward children, a tendency that prompted Sen. Jeff Merkley, D-Ore., to speak with Salon about his observations trying to visit one such detention center last year.

"We were not allowed to speak to children," Merkley told Salon. "So you had these rules that had been in the facility — it's either Department of Homeland Security or Health and Human Services — they are imposing two-week requirements, you have to seek a waiver, they don't want to do it except when they can fly in special minders to control everything you do while you're there. We are not able to exercise oversight if we can not get into a facility on brief notice and actually talk to the relevant people, be they staff or be they actual for example the children or adult prisoners."