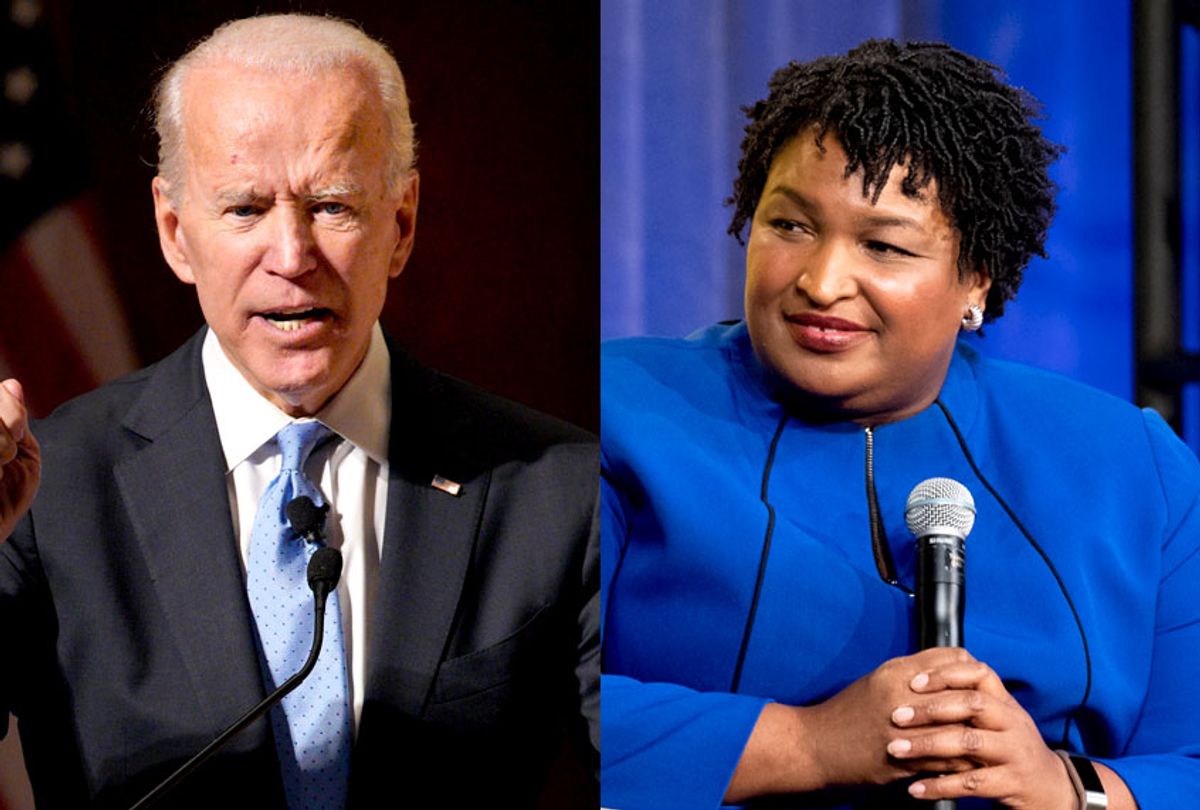 A new report reveals that former Vice President Joe Biden may not only announce that he is running for president in 2020 but immediately tap former Georgia gubernatorial candidate Stacey Abrams as his running mate when he does.

"Close advisers to former Vice President Joe Biden are debating the idea of packaging his presidential campaign announcement with a pledge to choose Stacey Abrams as his vice president," Axios reported on Thursday. The piece claimed that there is fierce debate among Biden's advisers as to whether he should do so: Some argue that it would help Biden demonstrate that he isn't out of step with the times, as well as compensate for shortcomings in his past political positions, while others are worried that it would be perceived as a gimmick or feed a perception that he believes his nomination is inevitable.

The reports about a possible Biden-Abrams ticket raises new questions about Biden's meeting with Abrams last week. The former vice president apparently met with Abrams at his request, and while the subject of their conversation was unclear, it was widely noted that Abrams has been considered as a Democrat with a bright future ever since she lost the 2018 Georgia gubernatorial election under circumstances that many critics have described as suspicious.

"My objective is to make sure I want to do that job, and because I’d not thought about the Senate before — it had never been in my list of considerations," Abrams told the Associated Press when asked about whether she would consider running for the United States Senate.  "The Senate is a different way to tackle the issues I see. It is a continuation of my legislative work, which I appreciated, but it’s an indirect solution to some of the challenges I see."

Speaking with Salon last April, Abrams hinted at a general level of discomfort in the public eye, admitting that she is "an introvert by nature" who watches "an inordinate amount of television alone."

One possible case to be made in favor of Biden selecting Abrams is that — whereas potential Democratic presidential nominee former Rep. Beto O'Rourke lost his 2018 election (against Sen. Ted Cruz in Texas) without controversy — there was rampant voter suppression in Abrams' race against Republican candidate Brian Kemp, so much so that it may have very well cost Abrams the election.

"It would be an audacious move that, in theory at least, would speak to several of his liabilities," Will Marshall, president and founder of the moderate think tank Progressive Policy Institute, told Salon. "One is he's older and a very well-known commodity. The other is that he's a white male in a party where minorities, women and young voters form a very significant part of its base."

He added, "I think something like this would obviously generate a lot of attention, but Joe Biden going to get attention anyway because he's leading in the polls and because he's got probably close to 100% name recognition, and because a lot of people see him as a safer choice than a lot of the more left-leaning candidates in the Democratic primary contest. I think what a move like this would not answer by itself are the questions about Joe Biden's capacities as a campaigner in 2019 and 2020. He's run before and was not successful, and the question is what would he bring this time that would change that equation?"

"Biden has been in politics for seven centuries and has failed to address the issue of the suppression of the black vote," Palast told Salon. "I'm glad he discovered it in the sunset of his life, but it won't change his record by picking Stacey Abrams, who is the go-to choice for every Democratic candidate."

He added, "Stacey Abrams is a rock star. She would help anyone win. I don't think this is a unique or brilliant choice of Biden's."