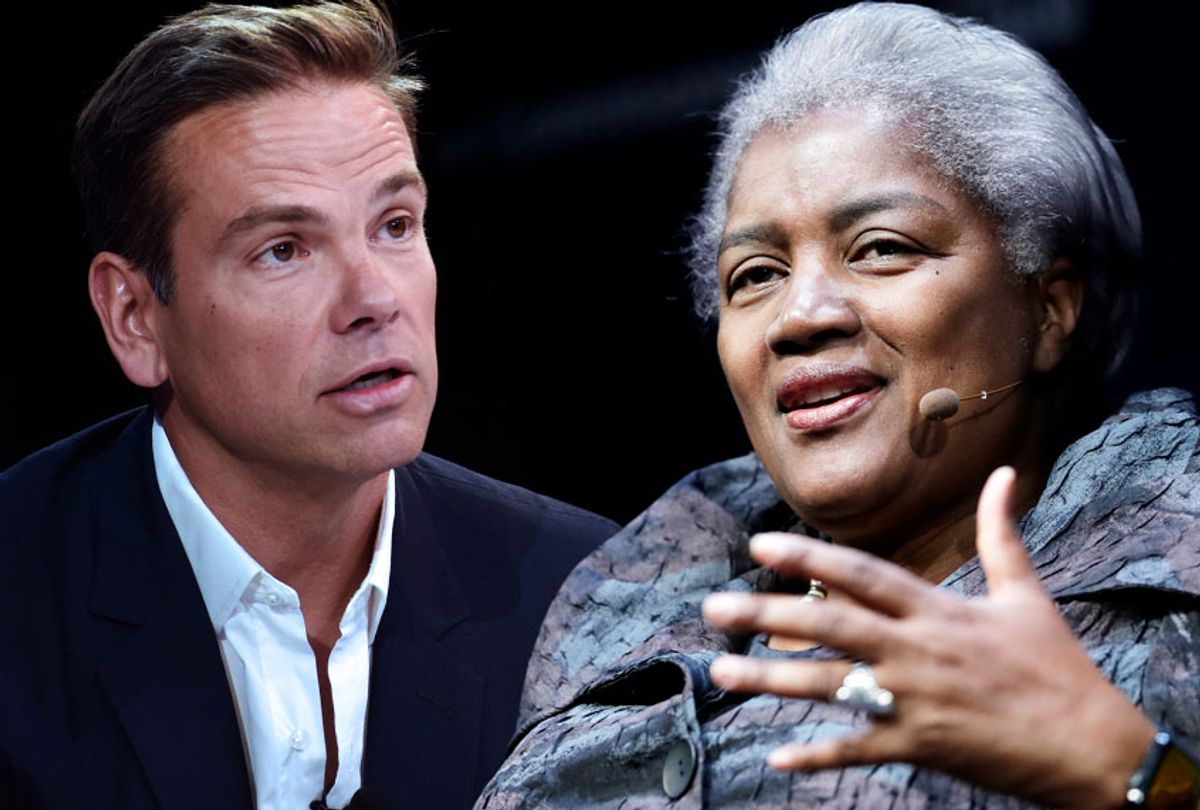 On March 18 former Democratic National Committee Chair Donna Brazile screeched into the headlines by announcing she had joined Fox News as a contributor. Brazile, a political strategist with a long history of working on behalf of liberal power players in Washington, D.C., held the same job at CNN. But that was before WikiLeaks circulated the content of stolen emails indicating she had secretly slipped debate questions to Hillary Clinton’s campaign prior to a televised debate hosted by CNN.

Not surprisingly, the network fired her after those revelations came to light. And I suppose isn’t terribly shocking that Fox would now bring her on board. After all, this is the network that until very recently employed far-right political operative Sebastian Gorka, who recently warned CPAC attendees that Democrats are a secret cabal of hamburglars.

Brazile explains her decision in a column posted on Fox News’ website: “It concerns me, as it does the majority of good Americans, that our national debate has become hostile and disrespectful. We no longer simply agree to disagree.”

She goes on to add, “In order for us to best decide as a people how to better protect and preserve our way of life, we need to first be able to hear what others are saying without the filter of bias and contempt. Not until we once again become practiced at treating those of differing views with civility and respect can we begin to join together to solve the myriad of problems our country must overcome.”

Her tone in a subsequent interview with The New Yorker is far less conciliatory. Initially she states her case to Isaac Chotiner by saying, “I wanted to have access to the TV world. I consider myself a pundit. I am not a journalist. I am a pundit with a partisan point of view.”

When Chotiner persists in asking why on Earth she would join a network that constructed its success in sowing fear and division along lines of race and class, Brazile drops the pretense of diplomacy:

I want you to be clear that I have my marbles. This is Donna Brazile. You are not talking to a phantom. You are talking to me. Don’t call me and act as if you are somehow appalled that a black woman, or a woman, or a liberal progressive, would go, “Hell, yeah, I want to go in that den.” And I want to fight from inside and fight from the outside. I may be naïve in my judgment, but I am wise in my view that, long term, we are not going to make progress by simply being out throwing rocks. I don’t want to do that. This is my decision.

This is also intentional strategy. Brazile is aware of how Fox historically puts its liberal voices in the corner, contenders who cannot or will meet the toxic bluster and shouting of Laura Ingraham or Sean Hannity with equivalent spleen.

Brazile’s theatrical clobbering of a reporter at one of the nation’s premiere publications was meant to show the world she has the ovaries to handle the Fox pundit brand of invective; she is not going out like Juan Williams. But this also lends a note of contradiction to her statement of purpose. It’s impossible to win points for civility in a forum devoted to “winning” by wielding aggression, insults and conspiracy theory wrapped in a cloak that reads “news.”

Even so, Brazile is leaping into the Fox den in the wake of a major shift in the network’s highest ranks, a development that stands to have a far greater impact on the long-term health of the body politic than the hiring of a left-leaning personality (or the news of another hire from the opposite side of the political aisle, former Speaker of the House Paul Ryan (R-WI), to sit on the network’s board of directors).

One day after Brazile’s announcement, The Walt Disney Co. completed its $71.3 billion acquisition of most of 21st Century Fox, establishing Lachlan Murdoch as CEO and chairman and Rupert Murdoch as co-chairman of the Fox broadcast network, a chain of owned and operated TV stations, Fox Sports and, yes, Fox News.

Lachlan, like his father, is politically conservative and concerned with the bottom line. But this New Fox is a much smaller empire than the one the Murdoch family’s 88-year-old paterfamilias ruled over.

An extensively reported Washington Post profile of Lachlan published last Wednesday opened by citing another major difference between father and scion, that unlike Rupert, “President Trump has never called Lachlan Murdoch.” The story goes on to state that Lachlan doesn’t like to talk to politicians, further describing Ryan’s addition to the network’s board “an implicit declaration of conservative principles, and also of some independence from Trump.”

This is an odd position to be in, given that his father parlayed his close relationship with Trump to transform Fox News from a dominant, conservative-leaning alternative to broadcast news and CNN into what one subject featured in another New Yorker profile describes as “the closest we’ve come to having state TV.”

This is how Fox Corp, and the news audience in general, enters a new era. The new man in charge is supposedly more distant from the White House, but understands the importance of Fox News to Fox Corp’s financial health. Hence Fox News selling itself under the banner of “America’s Watching” at a recent upfront presentation, where its reps made the case that it appeals to viewers of all political stripes.

Its 2018 finish as the most-watched network in all of cable backs up this assertion; in terms of average total prime time viewers, it placed ahead of second-place finisher ESPN, MSNBC and HGTV’s 1.3 million watchers, according to Nielsen, with USA Network and TBS tied for fifth place.

Recently the channel also dealt with an exodus of advertisers, pulling their support in light of Jeanine Pirro’s Islamophobic comments about Rep. Ilhan Omar (D-MN) and resurfaced sexist, racist and homophobic comments Tucker Carlson made prior to joining Fox. Fox formally condemned Pirro’s remarks and suspended her for two weeks.

Carlson, whose show is one of the highest rated on the network and in cable news as a whole, has shed more than 26 advertisers since his December comment that immigration makes America “dirtier” and “poorer,” and a subsequent assertion that higher-earning women pose a threat to the marriage prospects of men who earn less.

Even so, Carlson remains on the air and, in fact, his show’s ratings rose by eight percent last week despite sustained calls for an advertiser boycott, led by progressive outlets including Media Matters for America and MoveOn.Org.

Carlson, unlike Pirro, enjoys Fox’s support thus far. And this, naturally, invites the question — mostly rhetorical — of whether the younger Murdoch will be moved to coax Fox News more in the direction of what Brazile is envisioning, a platform for even slightly more civil discourse, or maintain the status quo of fearmongering and nativist rhetoric peddled wholesale by its prime time hosts.

Again, this is rhetorical.

As Media Matters critic Matthew Gertz observed on Twitter, “It takes a special kind of arrogance to think you are such a powerful communicator that your guest spot on Sean Hannity's show is going to change viewer minds.”

The thing about Fox News is that its strategy of ginning up rage is well-embedded in its foundation by now, regardless of how vigorously Lachlan, according to that Post report, touts the strength of its news division.

There’s never been a distinct line between Fox’s journalists and the opinion hawkers that draw its highest ratings; on the contrary, since Trump took office, the line between the two has only frayed further. And Fox does have journalists who display a healthy skepticism and don’t always swallow the party line peddled by the White House, as Chris Wallace did in January when he checked White House press secretary Sarah Huckabee Sanders’ false claims about border security.

Anchor Shepard Smith can win praise from moderates for speaking out as a centrist voice, but he also earns loud jeers and threats from Fox News’ right-wing, older and mostly white Fox core audience. That same audience, by the way, probably isn’t too excited to see Brazile, which doesn’t augur great potential of success for her stated goal of being heard by Fox viewers and shifting the tone of debate for the better.

But maybe what's she's really hoping is to be heard, one way or another, by the one person in that audience who matters most in the long run.