"They didn't deserve for the election of this president to try to be taken down," Trump's press secretary adds 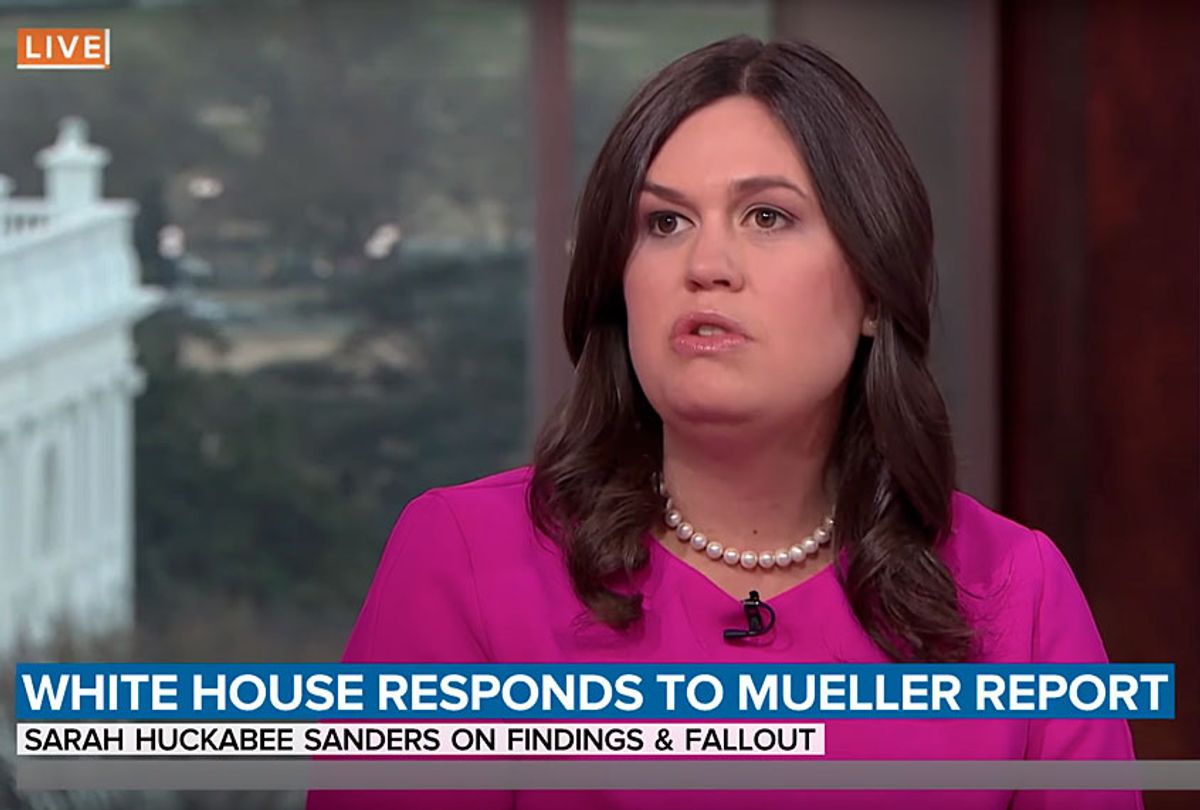 White House press secretary Sarah Huckabee Sanders declared Monday that both Democrats and the media owe President Donald Trump an apology in the wake of Attorney General William Barr's letter to Congress stating that special counsel Robert Mueller had found no evidence of collusion between the president's 2016 campaign and Russia in the course of his two-year investigation, which concluded last week.

Sanders, in an interview with NBC's Savannah Guthrie on "Today," was pressed by the TV host on whether the commander-in-chief should apologize to Mueller after Barr informed Congress on Sunday of the conclusions drawn by the special counsel in his highly-anticipated report.

"For the last two years, the president has absolutely eviscerated Bob Mueller – a lifelong public servant, a former Marine, a registered Republican, I might add," Guthrie said to Sanders. "He's called him a 'national disgrace, discredited, a prosecutor gone rogue who oversaw a gang of thugs.'"

"Did Robert Mueller deserve better from the president than this kind of language and behavior?" Guthrie then asked Sanders.

Sanders responded that she thinks "the American people deserved better" from Mueller, the Democrats and the media. "They didn't deserve for the election of this president to try to be taken down," Sanders added.

Guthrie then interrupted Sanders to again press the White House press secretary on the president's "rhetoric about a public servant doing a job."

"Are you kidding?" Sanders responded to Guthrie. "The president's rhetoric matches. They are literally — the media and the Democrats have called the president an agent of a foreign government. That is an accusation equal to treason, which is punishable by death in this country."

Guthrie then pushed Sanders for comparing Trump's criticism of the investigation to Democrats and members of the media.

"You have kids, and you know that if you say, 'Did you do this?' The answer isn't: 'Yeah, but my brother did that.' So let's talk about the president's behavior,'" Guthrie said. "[Trump] trashed [Mueller] for two years, and in the end Mueller just did an investigation that ultimately the president considers a total exoneration of him. Does he owe Robert Mueller an apology for that kind of rhetoric?"

"I think Democrats and the liberal media owe the president, and they owe the American people an apology," Sanders answered. "They wasted two years and created a massive disruption and distraction."

Mueller's report did not clear Trump of allegations that he could have committed a crime by attempting to obstruct the various investigations into Russian interference in the 2016 election, but it stopped short of directly accusing the president. The attorney general cautioned that while Mueller's report "does not conclude that the president committed a crime, it also does not exonerate him" on obstruction of justice. That detail suggests the president's legal troubles may be far from over, although his numerous denunciations of collusion with Russia now appear to be supported by the results of Mueller's years-long investigation.

Barr's delivery of Mueller's conclusions has launched a new chapter in the battle over Mueller's probe. Democratic lawmakers are demanding that the Justice Department release Mueller's full report as they dismiss Barr's four-page summary of the investigation as insufficient and incomplete. Republicans, meanwhile, called for Congress to move on from the investigation, which they believe has vindicated Trump.

It remains unclear what other findings Barr will release, although he has previously pledged to make as many of Mueller's findings public as possible. The Associated Press reported Barr would be "consulting with Mueller to determine what else can be release," although the outlet noted that "whatever is provided is unlikely to be enough for Democrats, who have said they want all of Mueller's underlying evidence — including interviews, documents and material turned over to the grand jury." Democrats have vowed to subpoena Mueller and Barr — if needed — to push for more full disclosure.

Trump himself said he believes Mueller's full report should be made public, even as he criticized its existence."Let it come out," Trump told reporters last week. "Let people see it." However, it is also unclear whether his administration would fight subpoenas to compel Mueller to testify or attempt to block the release of grand jury material. According to the AP, "If the administration decides to fight, lawmakers could ask federal courts to step in and enforce a subpoena. A court fight could, in theory, reach the Supreme Court."