Trump's latest bizarre pledge: Give us back the House and we'll be the "Party of Great HealtCare"

Trump follows the longtime Republican playbook on health care: Oppose Democrats but offer nothing of your own 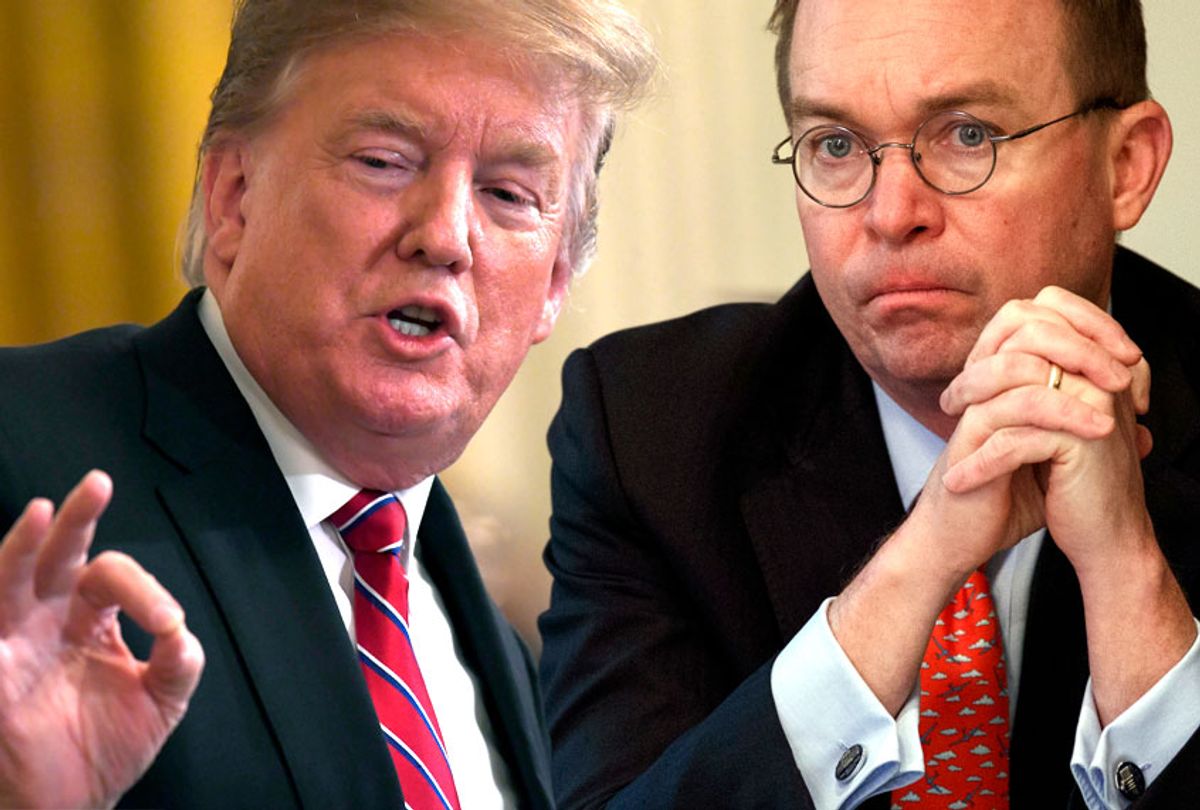 On the issue of health care, President Trump is following a page from the tried-and-(not so)-true Republican playbook — namely mindlessly opposing all Democratic policies while proposing nothing coherent of his own.

Here are the president's Monday tweets that he appears to believe constitute a convincing pitch to voters:

Notably, Trump's statements appear to contradict an assertion made on Sunday by his acting chief of staff, Mick Mulvaney. When speaking to ABC News, Mulvaney claimed that Americans who were concerned about losing their health coverage if Trump succeeds in getting Obamacare struck down by the federal courts need not worry. In Mulvaney's words, "Every single plan that this White House has ever put forward since Donald Trump was elected, covered pre-existing conditions." Like the president, Mulvaney insisted that "Obamacare is not working" and "even Democrats admit that."

Most Democrats are in fact happy to defend Obamacare (although some would indeed like to replace it with a national single-payer plan) and there is plenty of evidence suggesting that it has worked. , More important, the president's tweets, alongside Mulvaney's false claims, make clear that Trump has no specific health care plan: He is simply asserting that, if the American people allow him to control both houses of Congress again, he'll come up with one. Two years of full control in Washington apparently wasn't enough

This tactic, though simplistic and lazy, has a history of working for Republican presidents and would-be presidents. When Richard Nixon ran for president in 1968, he promised that he had a "secret plan" for ending the Vietnam War. In reality, Nixon had exactly the opposite of a peace plan in mind; in the final days of the campaign, he used intermediaries to convince the South Vietnamese government not to accept any deal proposed by President Lyndon Johnson's administration before Election Day, lest it help Vice President Hubert Humphrey, who was the Democratic nominee.

Obviously that detail was not shared with the American people during the campaign. Instead they were reassured that once Nixon was president, his secret plan to end the Vietnam War would be implemented and that intractable conflict brought to a merciful close.

Trump used a similar tactic during the 2016 presidential campaign. Although his promised U.S.-Mexico border wall was a centerpiece of his candidacy, he offered wildly varying estimates of its cost ($8 billion to $12 billion), its height (35 feet, 40 feet, 50 feet or sometimes more) and its length. During the campaign he said that the wall would be made of preset concrete; during his presidency, he switched to advocating metal slats. When he was running for president he vowed over and over again that Mexico would pay for the wall; while in office, he caused government shutdowns in a failed effort to get American taxpayers to foot the bill.

This most likely foreshadows what would happen if Republicans succeed in getting Obamacare struck down and then retake full control of Congress in 2020 (under a re-elected Trump). Republicans have fervently opposed the Affordable Care Act since President Barack Obama started pushing for it in 2009, but have yet to come up with any kind of alternative of their own.

Their political strategy has instead been extremely primitive: They hope to destroy Obamacare and cause widespread suffering that will force Democrats to come to the table and work with them. Even then, it is unlikely that the dogmatic free-market ideology of modern Republicanism will permit any effective alternative that guarantees health care to all Americans.

It would be one thing if Republicans actually had a plan to address the health care crisis that would occur ensue if Obamacare were repealed. Even if that plan were libertarian nonsense, one could then argue that the health care debate was a genuine argument between two different policy visions offered in good faith. Instead, Trump and Mulvaney have made it clear that the Republican plan is to repeal Obamacare as a symbolic political victory, because the right-wing base hates it. They view the suffering of millions of Americans as an acceptable price to be paid.