He's what every man would be "if feminists ever achieve absolute power in this country," says the Fox News host 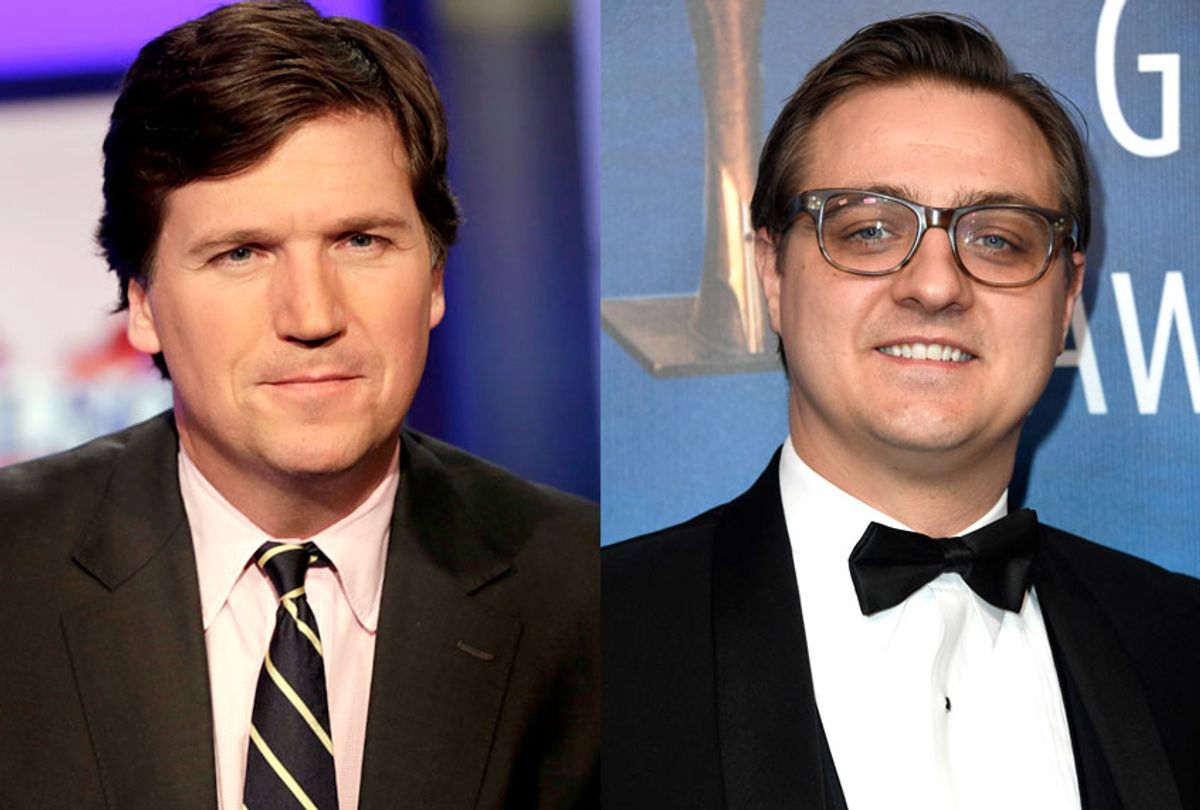 During his Monday night show, Tucker Carlson broadened his attacks beyond Democratic Rep. Alexandria Ocasio-Cortez (though he attacked her, too) to attempt several swings at MSNBC's Chris Hayes. I say attempt, because I'm not sure Carlson's truth bombs landed exactly as he intended.

While mocking the consequences of climate change — and specifically Hayes, for hosting a town hall with Ocasio-Cortez in the Bronx focused on the Green New Deal — Carlson said, "Chris Hayes is what every man would be if feminists ever achieve absolute power in this country: Apologetic, bespectacled and deeply, deeply concerned about global warming and the patriarchal systems that cause it."

Um Tucker, that . . . actually sounds really great. I can't help but imagine Carlson and his team workshopping the jab and trying out which ideal qualities for men would make it work. Did "anti-racist" get scrapped? "Fighting against sexual violence" read too clunky? Did they debate whether a softy like Hayes would be a daily flosser, and is that bad too?

I did not know that correcting men's eyesight was a covert feminist operation. Thanks, Fox News!

Since Carlson's attempted burn instead highlighted several good qualities Hayes possesses, his MSNBC colleague Stephanie Ruhle went ahead and added to the list: "Successful / Beloved husband & father / Respectful of others / Respected by others / Smart / Hard working / Civic minded," she tweeted. She added, sarcastically, "Who wants to live in a world with a bunch of those dudes?" (Raises both hands immediately).

How are we going to achieve these Chris Hayes-themed makeovers, mind control? This is the best Carlson can come up with to gin up fear of a possible authoritarian feminist takeover, of all the hypothetical stuff evil feminists would force men into doing, should all our secret meetings finally be successful? (What do you think we're doing in our safe spaces, Tucker?)

Does Carlson think that once we have a woman president, first on the agenda is to ban contacts for men as payback for what they've done to our reproductive rights?

But as the Washington Post noted, there is something telling about Carlson making these comments just a few weeks after the unearthing of his old radio interviews, which re-surfaced his wildly offensive views on women, Iraqis, and basically everyone who isn't a white guy.

While the backlash has seemed to subside — and given that Carlson regularly spouts equally offensive and sexist remarks on his Fox News show every night — it's revealing that he refused to be "apologetic" himself. After Media Matters published the audio, Carlson wrote in a statement that he would not "express the usual ritual contrition":

Maybe Carlson believes only women apologize. (I'm sorry, what?) Or even worse, in his feminist-dystopian fantasy, it's something only men who identify as feminists do.

"There’s a through line between Carlson’s view of apologies and Fox News’s prime-time lineup," Washington Post media critic Erik Wemple wrote. "Many of the folks who appointment-watch Carlson and Sean Hannity also support Trump, for whom not apologizing is a foundational ethic. Think of the Mexican-rapists comments, the insults against John McCain, and the offensive remarks about Haiti and about the Charlottesville protesters, not to mention many other outrages."

"If the president won’t say he’s sorry, why should Carlson? Just leave that to the feminist men over at MSNBC," Wemple added.

I suppose apologies could be seen as a feminist quality; many feminists believe in the necessity of accountability and restitution, especially in the work to stop violence against women.

But Carlson competes against Hayes every night for ratings, so the attempted dunks are particularly juvenile and transparent. After condemning Hayes as a kind, concerned feminist and playing a clip from the town hall where he introduced Ocasio-Cortez, Carlson said Hayes and the event "looks like 'Ellen.'"

"But did you hear what he said?" Carlson continued, mockingly. "Our only hope for survival. Holy smokes, that is terrifying. Help us, Chris Hayes!"

Of course, Carlson couldn't let Hayes be the sole target. "So it’s official, Alexandria Ocasio-Cortez is a moron," Carlson said after playing another clip from the town hall. "And nasty, and more self righteous than any televangelist who ever preached a sermon on cable access," he added. "She's not impressive, she's awful."

The Fox News host walked that back seconds later, claiming that "not everything she says is wrong." Lauding her "fairly insightful critique of the American economy," Carlson conceded that when it comes to income inequality, Ocasio-Cortez is spot on, even though he hates to admit it.

Tucker Carlson may well have recurring nightmares about Ocasio-Cortez — he wouldn't be the only one at Fox News, given the level of coverage she inspires — but tossing and turning at night as the feminist warriors of his subconscious force spectacles onto him against his will is a new possibility. Sleep well, Tucker. If feminists ever do get "absolute power," there's a whole slew of items higher on the agenda than giving men eyewear advice.