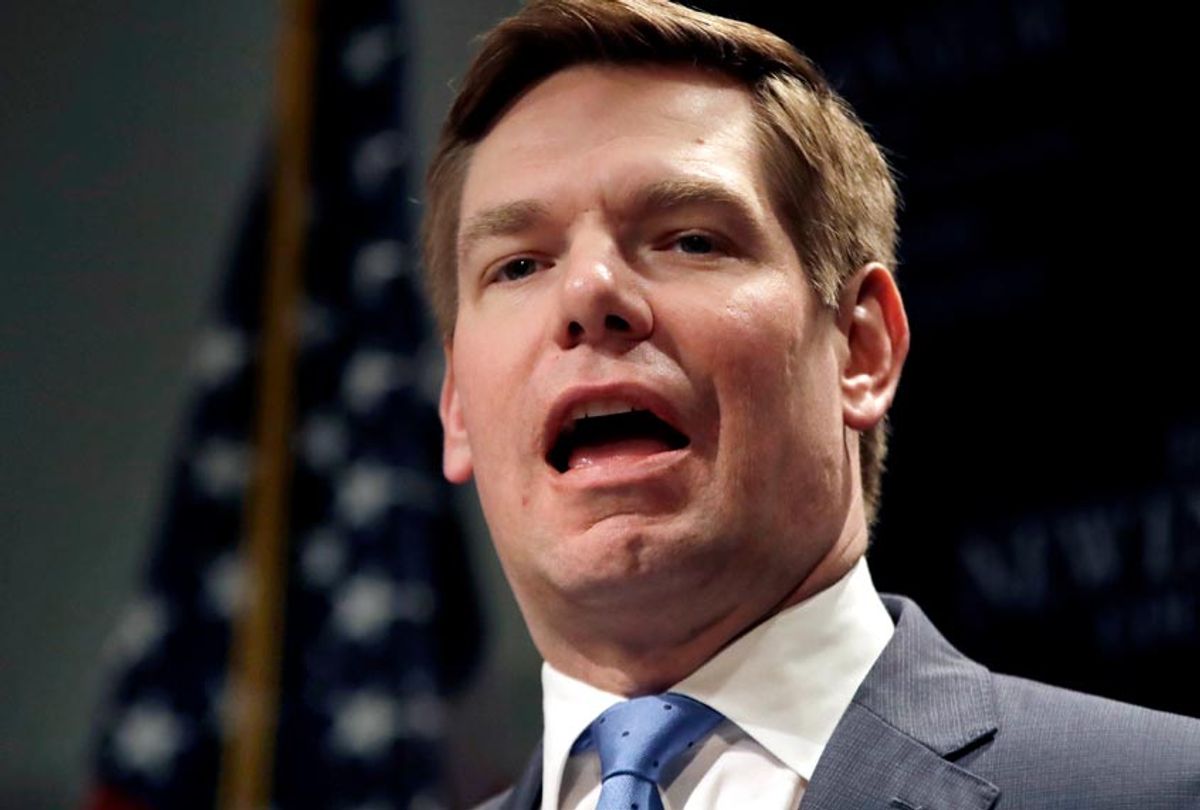 Eric Swalwell, the 38-year-old congressman from the East Bay region of California, announced he is running the Democratic nomination for president Monday night on "The Late Show With Stephen Colbert."

"I see a country in quicksand unable to solve problems and threats from abroad — unable to make life better for people here at home. Nothing gets done," Swalwell told the late-night talk show host. "I'm ready to solve these problems. I'm running for president of the United States."

"It's official," he added to cheers from the crowd. "Boy, did it feel good to say that."

Swalwell is the 18th Democrat to join the race for the party's 2020 presidential nomination. He has filed paperwork with the Federal Election Commission to officially set up a presidential campaign committee.

The California Democrat, a member of the powerful House Intelligence and Judiciary Committees, has gained attention as an outspoken critic of President Donald Trump's foreign policy. He is a frequent guest on cable news shows, where he often raises questions about Russian interference in the 2016 presidential election and other investigations into the Trump administration's relationships with foreign powers.

Swalwell, who enters an already crowded and ever-expanding field of Democrats vying to deny Trump a second term in office, has also made gun control a focus of his political career. He is scheduled to hold a town hall on ending gun violence in Parkland, Florida, the site of the February 2018 mass shooting at Marjory Stoneman Douglas High School.

The four-term lawmaker, whose entry into the 2020 presidential race has been anticipated for months, mentioned gun violence during his appearance Monday on "The Late Show," revealing he has spoken to concerned students who "see Washington doing nothing about it after the moments of silence."

Cameron Kasky, a survivor of the Parkland school shooting and co-founder of the March For Our Lives movement for gun safety, was the congressman's guest at Trump's State of the Union Address. Swalwell wrote an op-ed last year saying he was inspired by the movement.

"There's something new and different about the surviving Parkland high schoolers' demands," Swalwell wrote in May 2018. "They dismiss the moral equivalence we've made for far too long regarding the Second Amendment. I've been guilty of it myself, telling constituents and reporters that 'we can protect the Second Amendment and protect lives.'"

"The Parkland teens have taught us there is no right more important than every student's right to come home after class," he continued. "The right to live is supreme over any other."

Swalwell followed the on-air announcement with a video declaring, "Let's go big, be bold and do good!"

Swalwell, an Iowa native, has made it clear he has political ambitions beyond his current positions. He shocked the political establishment when he pulled off an upset victory that sent him to Congress in 2012. The former Bay Area prosecutor was a relatively unknown competitor when he unseated 20-term congressman Peter Stark, then a member of the powerful House Ways and Means Committee who had represented California's 15th Congressional District since 1973 — seven years before Swalwell was born.

Still, Swalwell, who is known among some lawmakers on Capitol Hill as the "Snapchat king of Congress," remains relatively unknown to a large percentage of American voters and will have a steep hill to climb in order to boost his national profile. By jumping into the 2020 race, he will likely face competition for the Democratic nomination from a host of high-profile candidates including Sens. Kamala Harris of California, Elizabeth Warren of Massachusetts, Bernie Sanders of Vermont; former Rep. Beto O'Rourke of Texas and Mayor Pete Buttigieg of South Bend, Indiana.

The working parent who is still paying off his student debt while raising two young children has suggested he may be interested in making a play for something other than the presidential nomination, such as a vice presidential nod, a Cabinet position or building name recognition to bolster a future Senate run.

That said, Swalwell recently told the San Francisco Chronicle he is aiming to "win."

"We're not trying to sell a book or get a leadership position anywhere else," he said. "If I'm going to run, it's going to be because we think we can win and, more important, make a difference."