If he wins the nomination, he would become the first openly gay presidential candidate from a major political party 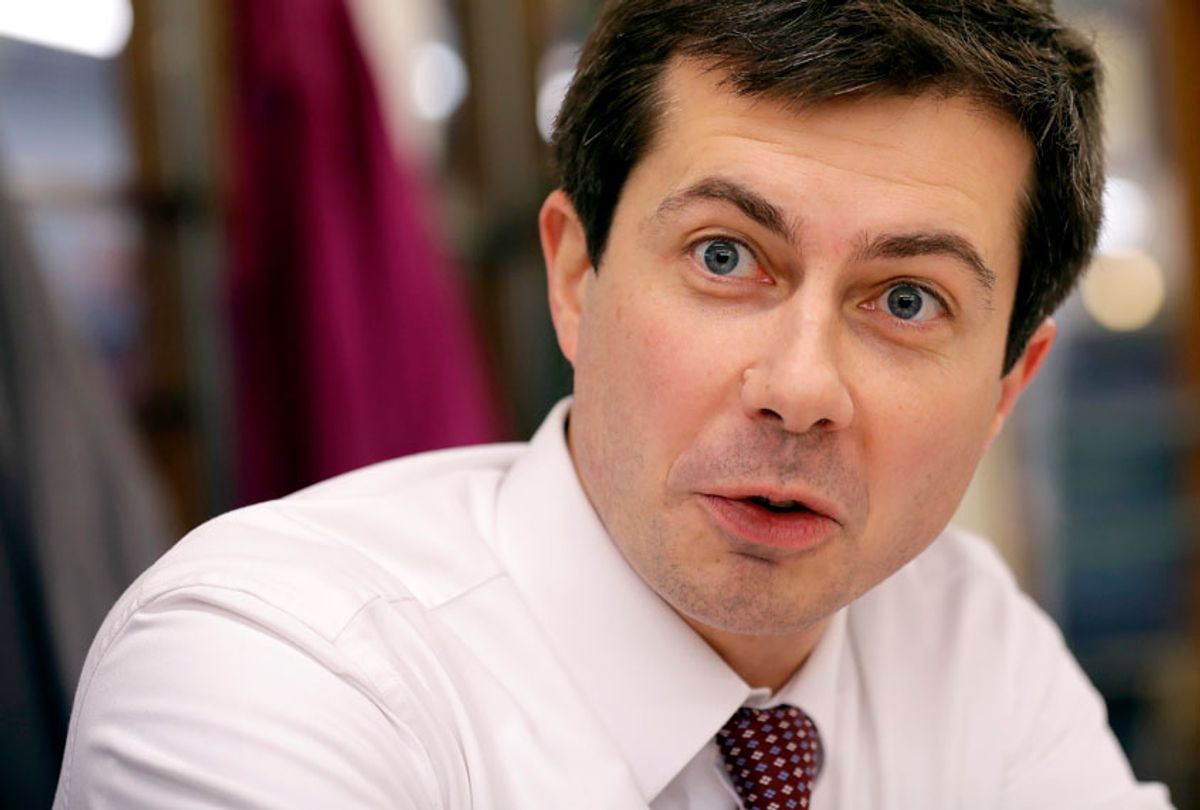 Pete Buttigieg, the 37-year-old Democratic mayor of South Bend, Indiana, revealed he is setting up an exploratory committee for a 2020 presidential bid on Wednesday. If he were to win the Democratic nomination, Buttigieg would become the first openly gay presidential nominee from a major political party.

"The reality is there’s no going back, and there's no such thing as 'again' in the real world. We can't look for greatness in the past," the mayor said in his announcement video that includes before-and-after footage of the once decaying South Bend city.

"Right now our country needs a fresh start," he added.

Buttigieg announced in December that he would not seek a third term as mayor of the Indiana city, generating buzz and speculation that he would join a crowded field of candidates who may seek the Democratic nomination for president, which includes several high-profile Democrats with experience in higher office. But, as the Washington Post's Annie Linskey noted in December, "Buttigieg would come to a presidential race familiar with a part of the country that Democrats lost badly in 2016 but regained somewhat in the midterm elections. States in the area, including Michigan, Minnesota and Wisconsin, will be key targets for both parties in 2020."

Like other American mayors considering throwing their hat in the ring for 2020 — among them Michael Bloomberg, the former mayor of New York, and Eric Garcetti, mayor of Los Angeles —Buttigieg pointed to his role in revitalizing his city of 100,000 residents, suggesting that he would be able to force similar transformations at the national level.

"When I arrived in office at the beginning of this decade, the national press said that our city was dying," he said in his video. "People on the outside didn't believe our city had a future."

"We propelled our city's comeback by taking our eyes off the rearview mirror, being honest about change and insisting on a better future," Buttigieg continued.

Buttigieg is expected to travel to crucial early nominating states to meet with voters. He will visit Iowa, the nation's first caucus state, followed by New Hampshire, the AP reported.

Buttigieg was first elected mayor of his hometown in 2011 at age 29, making him the youngest mayor of a midsize U.S. city. He graduated from Harvard University, where he hung out with Facebook CEO Mark Zuckerberg; "summer-interned for Ted Kennedy, worked for John Kerry’s presidential campaign, won a Rhodes Scholarship, learned Arabic in Tunisia . . . and volunteered for active duty in Afghanistan while serving as mayor, came out as gay in the local newspaper, married a schoolteacher live on YouTube, turned heads in a dark-horse bid to lead the Democratic National Committee, and had the New York Times's Frank Bruni gushing about him as potentially the "'First Gay President'— all by age 36," the Washington Post's Bob Moser wrote of Buttigieg in a profile of the mayor titled, "Could Pete Buttigieg Become the First Millennial President?"

When competing to head up the Democratic National Committee, Buttigieg told Salon party leaders need to remain aware that politics should be about principles rather than about individual people — a lesson he said Democrats need to learn with respect to Obama, but also in their efforts to obtain the email addresses of the nearly 3 million people who donated to Bernie Sanders' presidential campaign.

He also noted that Democrats need to realize that being perpetually outraged at the Trump administration is not going to win votes in it of itself. While he views opposing the new Trump administration as a critical goal for Democrats, party leaders need to do more than offer a "derivative" message of opposition, Buttigieg said.

"You can't get caught talking about Trump all the time," he said. "We've got to be talking to people about our own values and how their lives will be changing for better or worse because of the policies in Washington . . . If all we're talking about is Trump, then he's already won."

Buttigieg's political announcement video was shared Wednesday by David Axelrod, the former political adviser to Bill Clinton and Barack Obama's chief strategist in 2008 and 2012. "You don't have to be Sherlock Holmes to ferret out the message of South Bend Mayor @PeteButtigieg, who makes a clarion new generation call in this announcement video. Longest of longshots, but this 37-year-old gay, Afghanistan War vet has a remarkable story," he wrote.

CNN reported that Buttigieg has met with former President Barack Obama to discuss a potential 2020 bid — what has become a requisite stop on the pre-presidential tour. Mark Bode, a spokesman for the mayor, confirmed to the South Bend Tribune that Buttigieg met with Obama last fall. In an email, Bode wrote, "The mayor has met President Obama a number of times, most recently for an informal, private conversation last fall. The mayor has appreciated President Obama’s interest in the South Bend region both during and since his presidency."

The South Bend mayor is just one of many names being floated as a potential challenger to Trump in what is expected to be a very crowded Democratic field in 2020. Should Buttigieg decide to run, he would likely face competition for the Democratic nomination from Sens. Cory Booker (D-N.J.), Bernie Sanders (I-VT.), Kamala Harris (D-Calif.) and Elizabeth Warren (D-Mass.). Former Vice President Joe Biden and outgoing Rep. Beto O'Rourke, who fell short in his campaign against Republican Sen. Ted Cruz in the Texas Senate race during the 2018 midterm election cycle, have also hinted that they are weighing a White House bids. In addition, former Secretary of State John Kerry alluded to mounting a presidential bid — and these names are far from the complete list.

Buttigieg is releasing an autobiography in February about his life and his tenure leading South Bend.

"I belong to a generation that is stepping forward right now," he says in the video released Wednesday. "We're the generation that lived through school shootings, that served in the wars after 9/11, and we're the generation that stands to be the first to make less than our parents unless we do something different. We can't just polish off a system so broken. It is a season for boldness and a focus on the future."