Kamala Harris to weigh 2020 presidential bid over holidays: It will ultimately be a family decision

"Let's be honest: It's going to be ugly. When you break things, it is painful, and you get cut and you bleed" 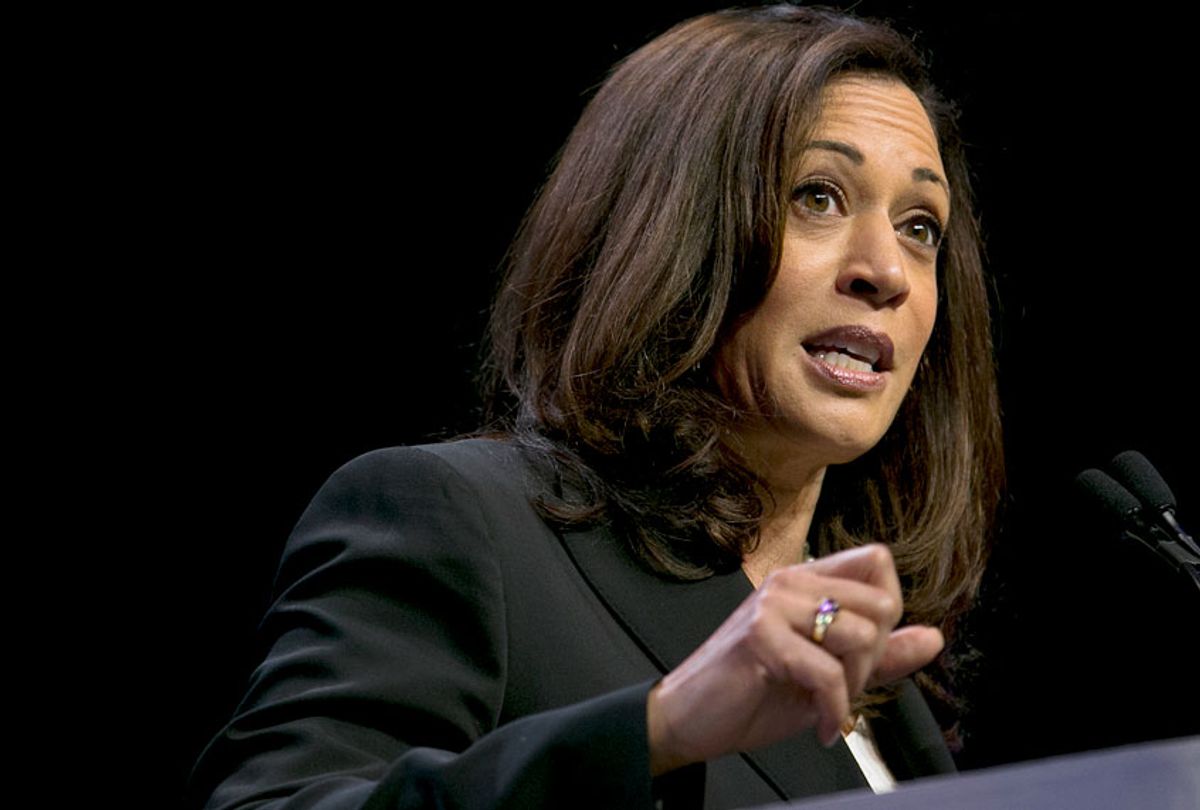 Democratic Senator Kamala Harris of California said on Saturday that she would decide before Jan. 1 whether to throw her hat in the ring to challenge President Donald Trump in 2020.

"It will ultimately be a family decision," the Democratic senator told MSNBC "Morning Joe" host Mika Brzezinski at the "Know Your Value" conference in San Francisco. "And, over the holiday, I will make that decision with my family."

The 54-year-old lawmaker made history in 2016 as the first biracial woman, the first Indian-American woman and the second black woman to elected to serve in the upper chamber. She is one of the most highly-anticipated potential 2020 contenders after emerging as a force to be reckoned with in the Senate. The rising Democratic star most recently drew national attention for the pointed questions that she asked Brett Kavanaugh before his confirmation serve as an associate justice on the U.S. Supreme Court.

Harris on Saturday made it clear that she is aware of the challenges that a campaign against Trump would entail, as she hinted at the president's style of politicking, which largely includes leveling frequent insults against his political rivals.

"Let's be honest: It's going to be ugly," she said. "When you break things, it is painful, and you get cut and you bleed."

There have been not-so-subtle hints that Harris is becoming more serious about 2020 by the day. In October, she visited the key early primary states of Iowa, South Carolina and Wisconsin to campaign for Democratic candidates ahead of the midterm elections. Her heightening preparation for a 2020 presidential run became more apparent after Politico reported that she sent $25,000 to the Democratic parties in all four early nominating states: Iowa, New Hampshire, South Carolina and Nevada.

The clearest sign of her Oval Office aspirations could be that she is scheduled to release a book about her life and her prescription for the country in January — roughly a year before Iowa is set to kick off its first-in-the-nation caucuses in the Democratic Party's presidential nominating process. The memoir, titled "The Truths We Hold: An American Journey," details Harris' personal story fighting for social justice as a tough former prosecutor and attempts to offer a "master class in problem-solving, in crisis management and leadership in challenging times," according to its publisher.

The Golden State senator is just one of many names being floated as a potential challenger to Trump in what is expected to be a very crowded Democratic field in 2020. Should Harris decide to run, she would likely face competition for the Democratic nomination from fellow Sens. Cory Booker (D-N.J.), Bernie Sanders (I-VT.) and Elizabeth Warren (D-Mass.). Former Vice President Joe Biden and outgoing Rep. Beto O'Rourke, who fell short in his campaign against Republican Sen. Ted Cruz in the Texas Senate race during the 2018 midterm election cycle, have also hinted that they are weighing a White House bids. In addition, former Secretary of State John Kerry recently alluded to mounting a presidential bid — and these names are far from the complete list.

According to a POLITICO/Morning Consult poll released in November, Harris ranked fifth among Democratic voters' preferred nominee to take on Trump's reelection bid. Biden came in first, followed by Sanders, O'Rourke and Warren. Notably, the success of women and nonwhite Democrats in the midterm elections could boost Harris' prospects as a candidate who could appeal to female and African-American voters —two voting blocs that are critical to Democrats' path to reclaiming the Oval Office.