Warren suggests Trump may be behind bars during 2020 election: "He may not even be a free person" 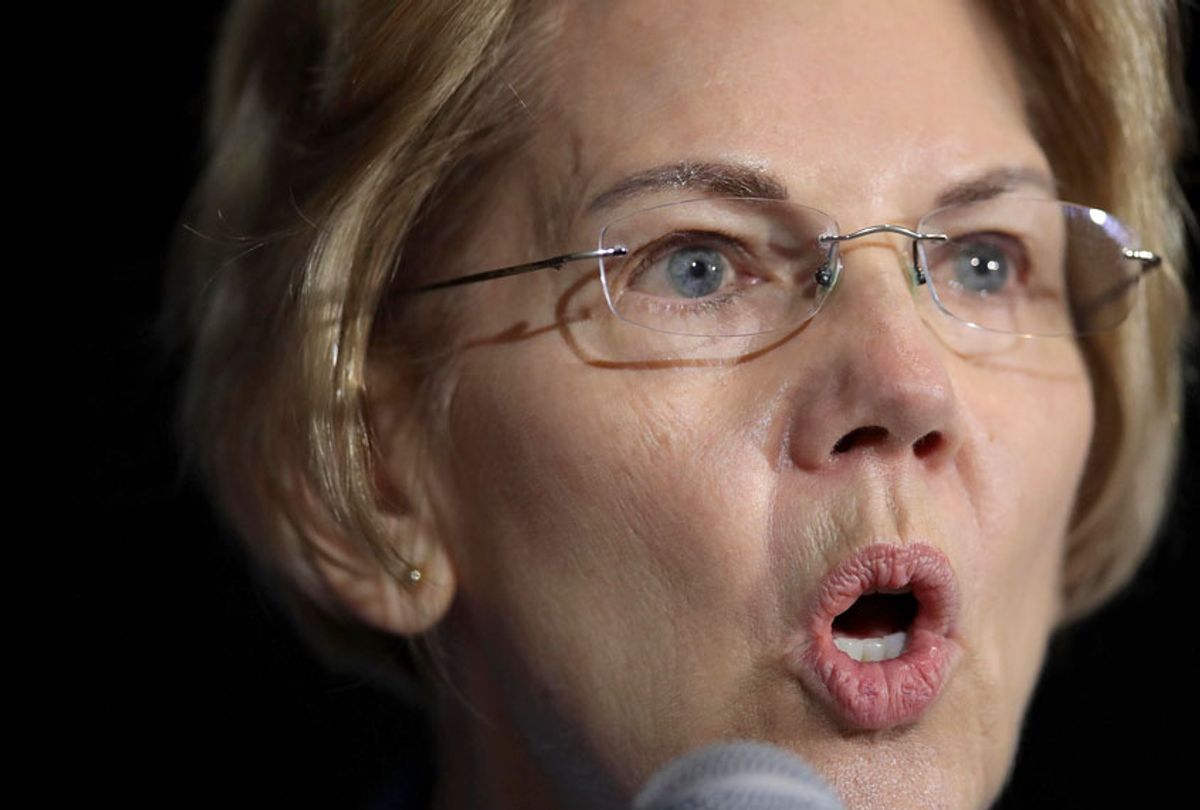 Sen. Elizabeth Warren (D-Mass.) said President Donald Trump might not be on the ballot in 2020 — because he may be trading the White House for The Big House.

The progressive lawmaker and Democratic presidential candidate suggested at a rally in Cedar Rapids, Iowa, on Sunday that Trump, who has emerged as a key figure in multiple federal investigations, including special counsel Robert Mueller's probe into Russian interference in the 2016 presidential election, may be behind bars by the next presidential election.

Warren went on to describe Trump as "the symptom of a badly broken system."

"So our job, as we start rolling into the next election, is not just to respond on a daily basis. It's to talk about what we understand what is broken in this country, talk about what needs to be done to change it and talk about how we're going to do it," she said. "Because that is not only how we win – it's how we make the change we need to make."

Warren's direct hit at Trump came one day after Trump revived his use of "Pocahontas" as a racial slur against Warren after she formally kicked off her campaign for the Democratic nomination.

"Today Elizabeth Warren, sometimes referred to by me as Pocahontas, joined the race for President,"he tweeted, seemingly ignoring Native American groups' past calls to stop invoking the name of a historical Native American figure in a way to criticize a political opponent. "Will she run as our first Native American presidential candidate, or has she decided that after 32 years, this is not playing so well anymore? See you on the campaign TRAIL, Liz!"

Trump's capitalization of the word "trail" came under intense scrutiny over his apparent reference to the "Trail of Tears," the forced relocation of Native Americans in the 1830s, as part of Andrew Jackson's Indian removal policy. It resulted in the deaths of thousands of Native Americans.

Warren has faced strong criticism for her claims of Native American ancestry, especially from tribal leaders who have ripped her attempts to confirm that she has some Native American ancestry via a DNA test as a "mockery out of DNA tests and its legitimate uses while also dishonoring tribal governments and their citizens." Warren apologized to the Cherokee Nation earlier this month for releasing a DNA test in an attempt to prove it.

Warren officially launched her presidential campaign on Saturday in her home state of Massachusetts at a mill site where largely immigrant and female factory workers went on strike in 1912 to call attention to the wealthy power brokers who "have been waging a class warfare against hardworking people for decades," Warren said in her speech. It was a fitting backdrop for the longtime consumer advocate to advance her platform of taking a pickaxe to Wall Street. Warren cemented her 2020 campaign with a call to fight economic inequality and build "an America that works for everyone."

"Every day, there's a racist tweet, a hateful tweet – something really dark and ugly," Warren said of Trump. "And what are we, as candidates, as activists, the press, going to do about it? Are we going to let him use those to divide us?"