Ingraham pointed out that "Trump does really well with that group," which Democrats supposedly "have no clue" about 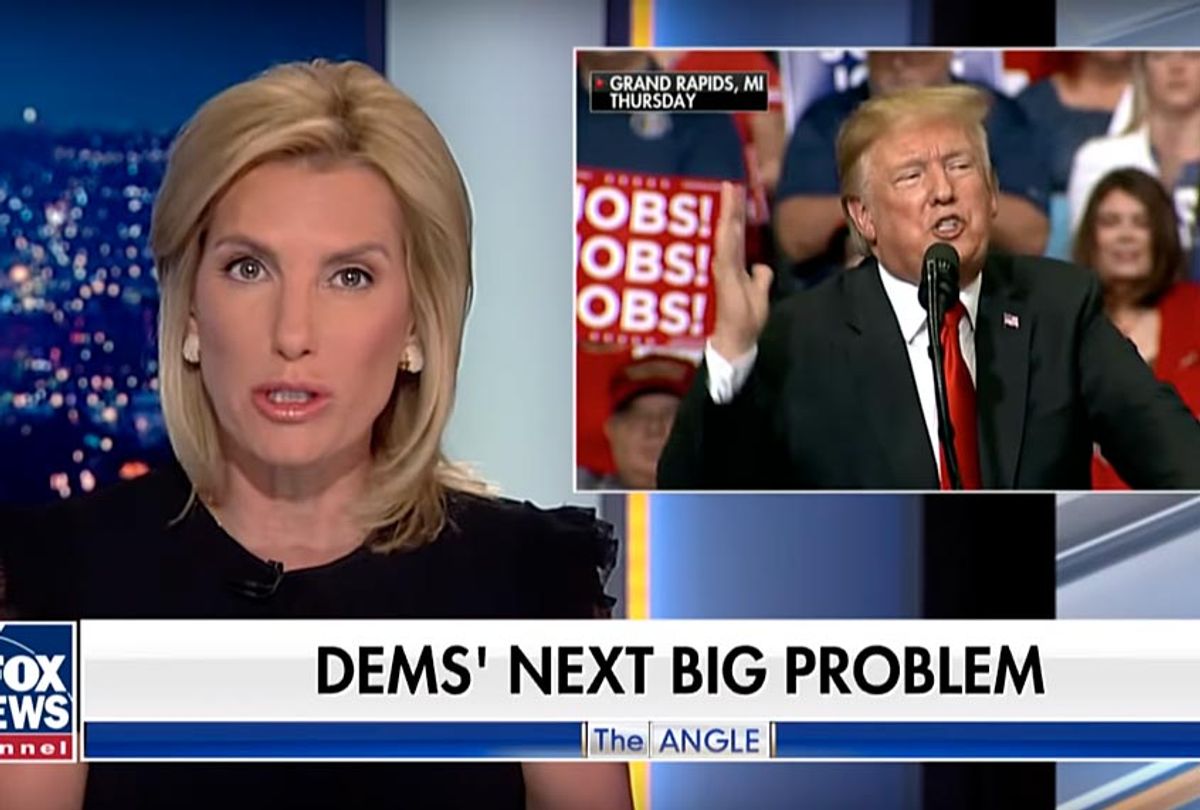 When it comes to voter outreach, Fox News host Laura Ingraham has a suggestion for the Democratic Party: Focus on white people instead of people of color.

The Fox News host, who has a history of making racially-charged remarks, highlighted the important of the economy, an issue that could have outsized influence in determining how American voters cast their ballots in the upcoming 2020 presidential elections.

"In a new Gallup poll, Trump scores 93 percent approval with Republican voters on his handling of the economy," Ingraham said. "So how on earth are Democrats going to beat the strongest economy in the G7 with record-low unemployment? What's their argument for beating that?"

After showing a mashup of top candidates vying for the 2020 Democratic nomination, Ingraham divined the party's argument to be "income inequality," saying that in her opinion, "this argument is a loser."

The Fox News host then claimed Americans have seen increased wages as the direct result of President Donald Trump's policies, which include "lower taxes, less regulation, pressure on China trade cheating and a tighter labor market for all working people."

"The Democrats' answer is higher taxes, more regulations, more low-wage laborers flooding into America," Ingraham countered. "That's exactly the opposite of what most working-class voters want."

This is when the Fox News host suddenly morphed the issue of the economy into one of race.

"For those liberals who put all their hopes in being saved by changing demography, well, here's a news flash: This is the percentage of white non-college graduate voters in a handful of key states," Ingraham continued. "In Iowa, they make up 62 percent of the population; in Michigan, 54 percent of the population; Ohio, 55 percent, Pennsylvania, 51 percent; and Wisconsin, 58 percent."

Ingraham pointed out that "Trump does really well with that group," one that Democrats supposedly "have no clue" how to court.

"Today's radicalized Democrat Party has moved further away from the voters they need to win in 2020. They still have no clue – it's unbelievable, really – how to speak to the working-class white voters, let alone how to get their votes," she said.  "They look down their elitist noses at all working people of all backgrounds. And their values? Come on. They pretty much look down their noses at everything about the working-class people."

In her commentary of race in America, one of Ingraham's frequent targets is Rep. Alexandria Ocasio-Cortez, D-N.Y., who in the 2018 midterm elections became the youngest woman ever elected to the Congress. In January, Ingraham complained about Ocasio-Cortez's "minority privilege," suggesting the congresswoman was "a protected member of a class that you can never criticize, lest you be called racist."

Last August, Ingram lamented "demographic changes" after attacking Ocasio-Cortez's intelligence by tallying how many times the self-proclaimed democratic socialist had uttered the word "like" in one interview. As my colleague Rachel Leah wrote, "By assaulting Ocasio-Cortez's acumen, Ingraham enforced racist stereotypes about the inferiority of people of color in the same manner used by President Donald Trump in his attack on LeBron James and Don Lemon ..."

"Nevertheless, she’s kind of right, in a general sense," Ingraham added, once she had finished mocking Ocasio-Cortez. "Because, in some parts of the country, it does seem like the America that we know and love doesn’t exist anymore. Massive demographic changes have been foisted on the American people, and they're changes that none of us ever voted for and most of us don't like."

Ingraham's words were praised at the time as "important" by David Duke, the former grand wizard of the Ku Klux Klan.

"One of the most important (truthful) monologues in the history of MSM [mainstream media]," Duke wrote in a tweet that has since been deleted.