Not so fast: After Melania Trump praises LeBron James, Don Lemon reminds us that "she was a birther"

The CNN anchor gave Trump credit for breaking from her husband, yet urged Americans not to "read too much into it" 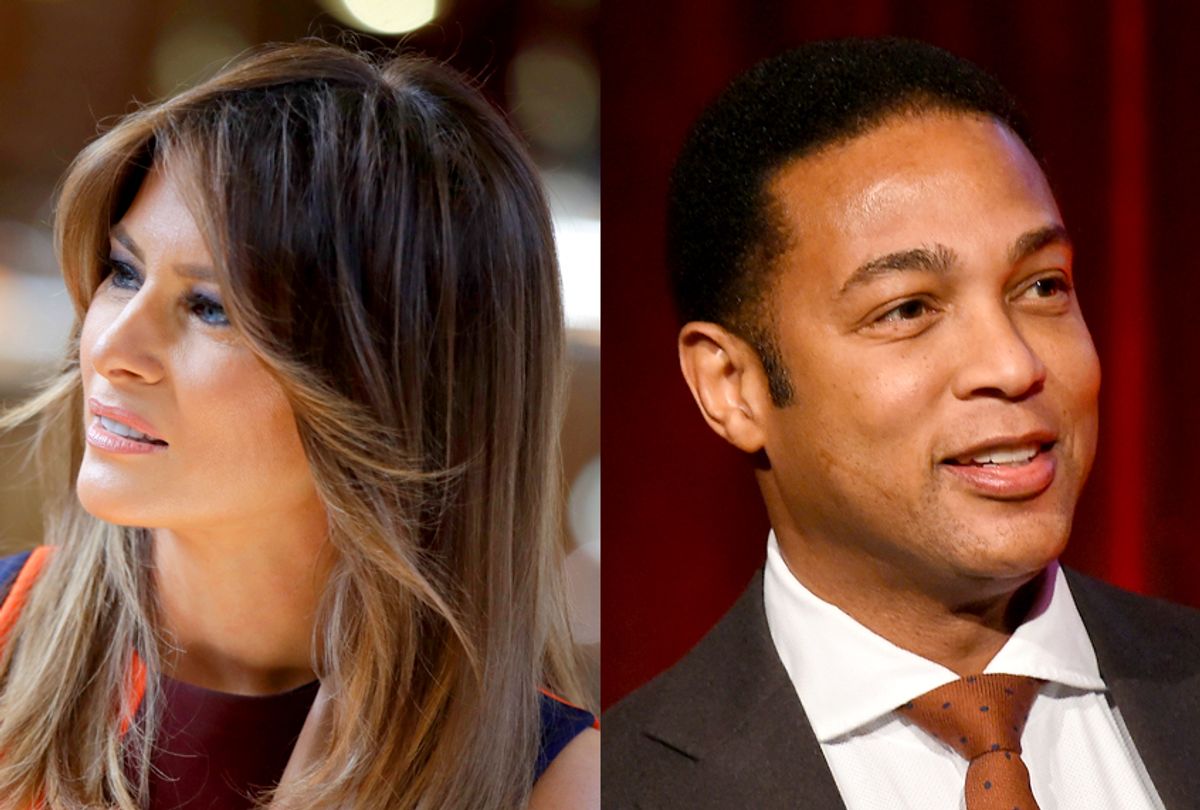 Many cheered over the weekend when Melania Trump broke from her husband and released a statement praising LeBron James for opening up a public school for vulnerable students in his hometown of Akron, Ohio. The first lady's applause came after President Donald Trump took to Twitter to disparage James by claiming that the NBA star displayed a lack of intelligence in an interview with CNN's Don Lemon.

But, do not be too fast to cheer the first lady, Lemon told Americans during a roundtable on CNN's "The Situation Room with Wolf Blitzer."

"I think that's great that Melania Trump did that. I give her credit for it," he said. "I don't know if we should read too much into it, because we also have to remember that she was a birther, too."

Lemon was referencing the racist questioning of former President Barack Obama's U.S. citizenship — and thus his eligibility to be commander-in-chief — a campaign that literally thrusted Trump into the political arena, as he emerged as the face of the debunked conspiracy theory. Trump and other "birthers" alleged that Obama's birth certificate was forged, and arguably the most-blatantly racist theory to surface was the assertion that Obama was actually born in Kenya, his father's country of origin.

In fact, there was so much pressure on Obama to produce his birth certificate — and other papers proving his credibility, like transcripts — that, in 2011, he did release it to the American public.

"Not once, in 235 years, have we ever demanded proof that our president was born on American soil," Goldie Taylor wrote for the Grio then. "In a stunning display of unchecked ego, Donald Trump quickly hosted a news conference, during which he took credit for forcing President Obama’s hand. The sometime real estate developer, socialite, author and television personality went on to caution onlookers to let 'experts' examine the document. Lest the president continue perpetrating what Trump has called potentially the 'biggest fraud in American history.'"

For Taylor and many others, the demand that Obama, the first and only black president, prove his identity, recalled the "show your papers" demands of the Jim Crow South, where black people were required to carry identification and were frequently subjected to similarly produce their papers. It was a despicable campaign in which Melania Trump, although an immigrant herself, participated.

"It would be very easy if President Obama just show it. It's not only — it's not only Donald who wants to see it," Melania Trump insisted during a 2011 interview with Joy Behar on HLN. "It's American people who voted for him and who didn’t vote for him. They want to see that."

"We’ve seen it," Behar countered. "It is not the same as yours, but it is a certificate of live birth."

President Trump attacked James on Saturday after the NBA star asserted his belief the president uses sports to divide the nation to Lemon on CNN. The commander-in-chief responded with insults for both men, writing: "Lebron James was just interviewed by the dumbest man on television, Don Lemon. He made Lebron look smart, which isn’t easy to do. I like Mike!"

"I do believe that this president is a racist, and I don’t say that lightly," Lemon said during the roundtable with Blitzer. "What he is playing on with me and LeBron James is an old racist trope about black and African-Americans and people of color being of inferior intelligence."

President Trump was widely condemned for this tweet, and soon after, the first lady released a statement via her spokesperson, praising James for his philanthropic work around education, adding that she would be open to visiting his new public school in Akron.

Think About It: The reality show presidency

If Barack Obama was the West Wing President, then Donald Trump is The Apprentice President.