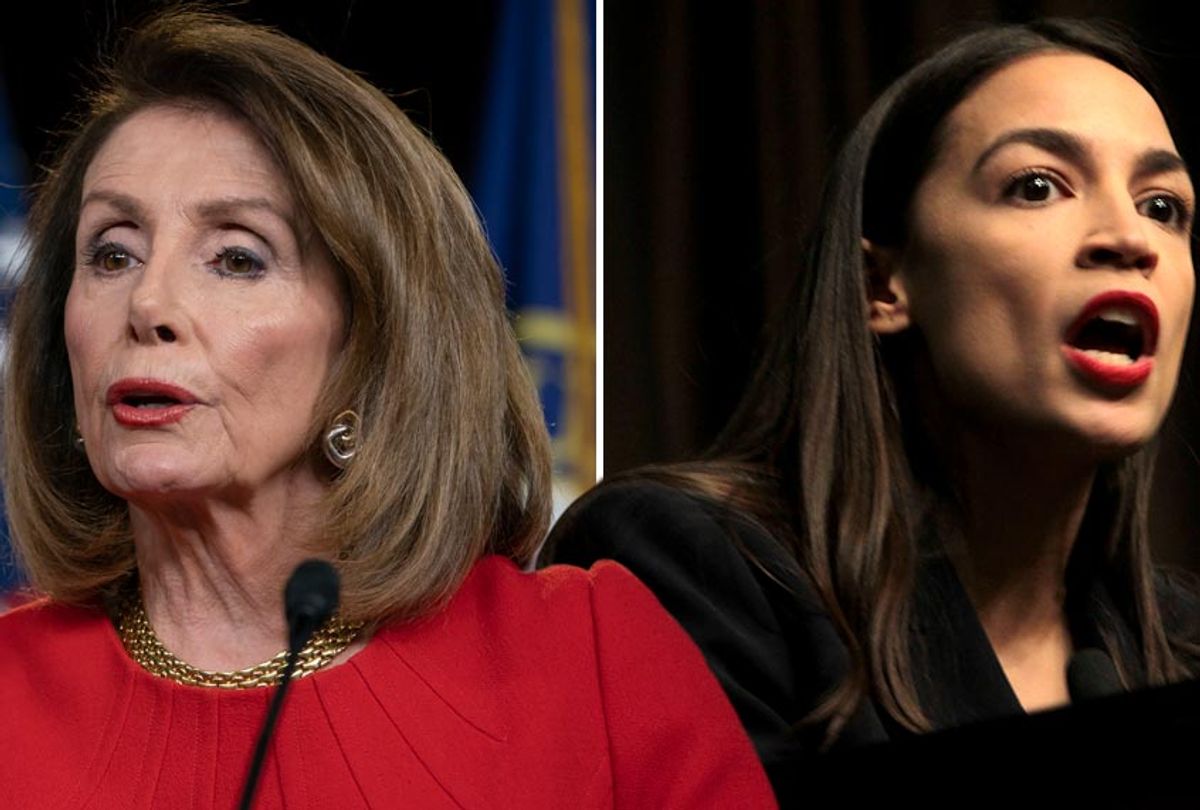 House Speaker Nancy Pelosi, D-Calif., has expressed frustrations with the growing progressive wing of the Democratic Party, which has increasingly pushed Democrats to the left and driven a wedge between rank-and-file members ahead of the 2020 elections.

Since the Democrats seized control of the House of Representatives in the 2018 midterm elections last November, a new generation of progressive lawmakers, including Reps. Alexandria Ocasio-Cortez of New York,  Ilhan Omar of Minnesota and Rashida Tlaib of Michigan, have at times clashed with more moderate, old-fashion liberals, such as Reps. Cheri Bustos of Illinois and Tim Ryan of Ohio.

In the wake of unrest and apparent divisions in her party, Pelosi told USA Today that Democrats should fight for the "boldest common denominator," before appearing to take a jab at Ocasio-Cortez, a rising star in the Democratic Party known for using social media to share her opinions or rallying support for sweeping action on climate change. The congresswoman has 3.88 million followers on Twitter as of this writing.

"While there are people who have a large number of Twitter followers, what's important is that we have large numbers of votes on the floor of the House," Pelosi said in an apparent reference to the New York Democrat.

The top House Democrat, who herself has 2.42 million Twitter followers, also noted progressives members of her caucus were "fine" after she told them they needed to propose legislation that can actually pass the lower chamber.

"As I say to my own district, 'You go out and elect 218 people just like San Francisco, then we can talk,'" she said.

This is not the first time Pelosi appeared to throw shade at Ocasio-Cortez and other progressive lawmakers. Earlier this year, the California Democrat somewhat dismissed the "Green New Deal," an ambitious — and provocative — climate change resolution introduced in February by Ocasio-Cortez and Democratic Sen. Ed Markey, D-Mass.

"It will be one of several or maybe many suggestions that we receive," Pelosi said in an interview with Politico at the time. "The 'Green Dream,' or whatever they call it – nobody knows what it is, but they're for it, right?"

Ocasio-Cortez was reportedly left out of the Select Committee on the Climate Crisis, Pelosi's newly formed House committee tasked with tackling climate change, although some reports suggested the freshman congresswoman declined an offer to sit on the panel.

Pelosi is not the only veteran Democrat who has appeared to express frustration with the New York Democrat. Ocasio-Cortez has previously come under scrutiny from members of her party for her use of Twitter to chastise critics (and sometimes fellow Democrats), as well as for her threat to support primary challengers against party incumbents who she purportedly believes are too moderate.

"This country has only ever changed for the better by groups of people that were willing to put everything on the line for a better future," Ocasio-Cortez said in video published in February by Justice Democrats, the progressive group that helped elect her and that recruits primary challengers to Democratic incumbents. "It didn't happen by people playing it safe. It happened by people putting their whole lives on the line, because they understood that this isn't just about us."