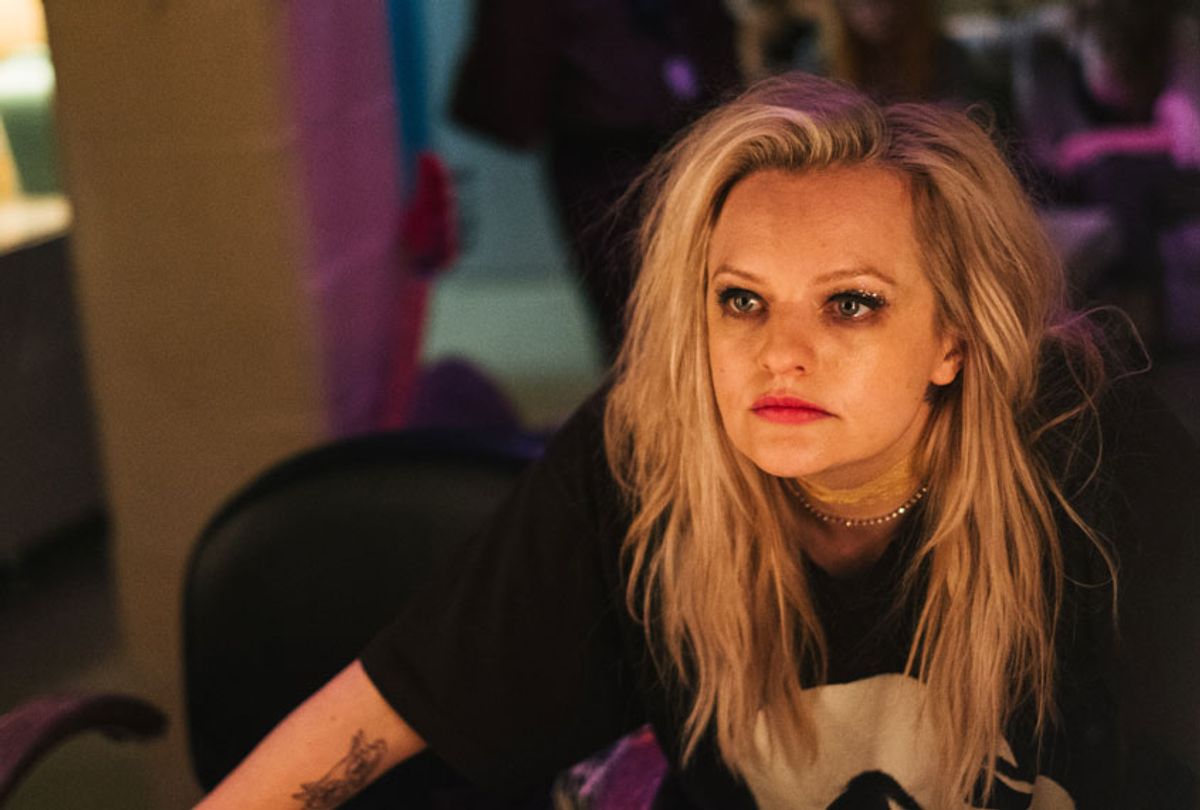 Written and directed by Alex Ross Perry and starring the always capable Elisabeth Moss, "Her Smell" takes itself very, very seriously. Arranged as a series of five episodic set pieces punctuated with home movie footage of happier times, it charts the out of control spiral of Becky Something, riot grrl prodigy and all around pain in the ass. Remember the awards show scene from "A Star Is Born"? Picture two and a half hours of that.

We first meet Becky and her band, Something She, full of youthful exuberance, celebrating gold records and Spin magazine covers in happier days. We're soon taken to a glimpse of their on stage life, powering through a raucous cover of "Another Girl, Another Planet." But wait, behind the scenes, could it be that Becky is a hot '90s mess?

Turns out she's an indifferent mother to her baby daughter, disdainful of her ex and his new, nice girlfriend, contemptuous of a successful fellow artist (a coolly glamorous Amber Heard) and in the throes of some freaky New Age BS. She spends the duration of the film either melting down or on the precarious verge of melting down, while assorted acolytes mostly scramble to accommodate her. A realistic vision of rock and roll excess? Maybe. Compelling storytelling? Maybe not. Scenes stretch out with the real time tension of a breakdown — how much time can Becky, burning through her label's cash, squander in a studio plucking uselessly away at her guitar? How long can she keep her bandmates, her family and the girl group (Ashley Benson, Cara Delevingne and Dylan Gelula, as a fiery trio you'd actually want to watch a movie about) she's now opening for waiting for her to arrive to perform a gig? How long would you, the viewer, like to wait as well to see if she shows up? And would you mistake your discomfort for a sign that what you're experiencing is somehow meaningful?

The heady cocktail of fame and music can make for great films, even if the story of rise and fall and redemption and/or ruin has been told a thousand times before. "Anvil! The Story of Anvil" is a hoot with a heart of gold. Director Penelope Spheeris's "The Decline of Western Civilization" and "The Decline of Western Civilization Part II: The Metal Years" are classics. And films from "Inside Llewyn Davis" to "Dreamgirls" to "8 Mile" have taken fictionalized versions of real artists and turned them into compelling entertainment. "Her Smell," however, is too joyless and tense an endeavor, the musical interludes too brief and uninspired to sustain the posturing darkness that surrounds them.

Playing a character best described as Courtney Love crossed with Norma Desmond, Moss can't be faulted for trying. She sings and plays guitar and keyboards, she rages and her darts her eyes nervously. Knowing one good thing when he sees it, director Perry holds the camera on Moss's mesmerizing, inscrutable face for lingering takes, dangling the question of whether she's about to erupt in a scream or a smile. And the rest of the cast are similarly competent, notably a grizzled Eric Stoltz as the band's enabling, exasperated manager and "GLOW" costar Gayle Rankin as the codependent drummer. Like a factory produced pop song, though, the efficient parts just never add up to anything stirring.

Moss, who collaborated with Perry in two previous films ("Listen Up Philip," "Queen of Earth") reportedly prepped for her role by immersing herself in the lore of Guns n' Roses and the recent Amy Winehouse and Lady Gaga documentaries. But "Amy" director Asif Kapadia did a beautiful job of capturing not just Winehouse's tragic fragility but her undeniable genius. And "Gaga: Five Foot Two" took an icon and showed the hard working human being behind the image. Becky, the ostensible "goddess" of Something She, never seems convincingly worth all the trouble she puts everyone in her path through. She's all excess and no effort, even in the film's one non chaotic, domestic scene. The utter fluff of Comedy Central's "The Other Two" frankly provides a far more credible, and emotionally resonant, exploration of how the talent sausage gets made, and without dialogue that sounds like rejected song lyrics. "She cut off our life together, swiftly and with no mercy," is the kind of line a screenwriter thinks really deep people say.

The most frustrating thing about "Her Smell," however, is its vague understanding of exactly what is supposed to be going on with Becky. The film rests upon her erratic, glitter crusted shoulders, but it doesn't really seem to know what's wrong with her. Becky's shown wrestling with sobriety, but she doesn't seem to be in a recovery program. She has dramatic mood swings, but is it addiction or bipolar disorder or both? I know the movie is a period piece, but I also lived through the '90s and we definitely had mental illness back then. There was a whole bestseller about Prozac! By remaining fuzzy about why Becky keeps going off the rails, it's hard to have a stake in what becomes of her. Tormented artist or just an insufferable pain the butt? Who's to say? The recent Netflix Motley Crue biopic "The Dirt" suffered a similarly embarrassing superficiality, but at least in the end Mick Mars has the courage to admit, "We shit on a lot of people and did things we regret every day." Becky, unfortunately, never arrives at that depth of insight and self-awareness that the guy who co-wrote "Girls, Girls, Girls" does.

All music movies are "Spinal Tap." Few of them go to 11. For all its yelling and theatrics, "Her Smell" can't even be bothered to figure out where the outlet is.