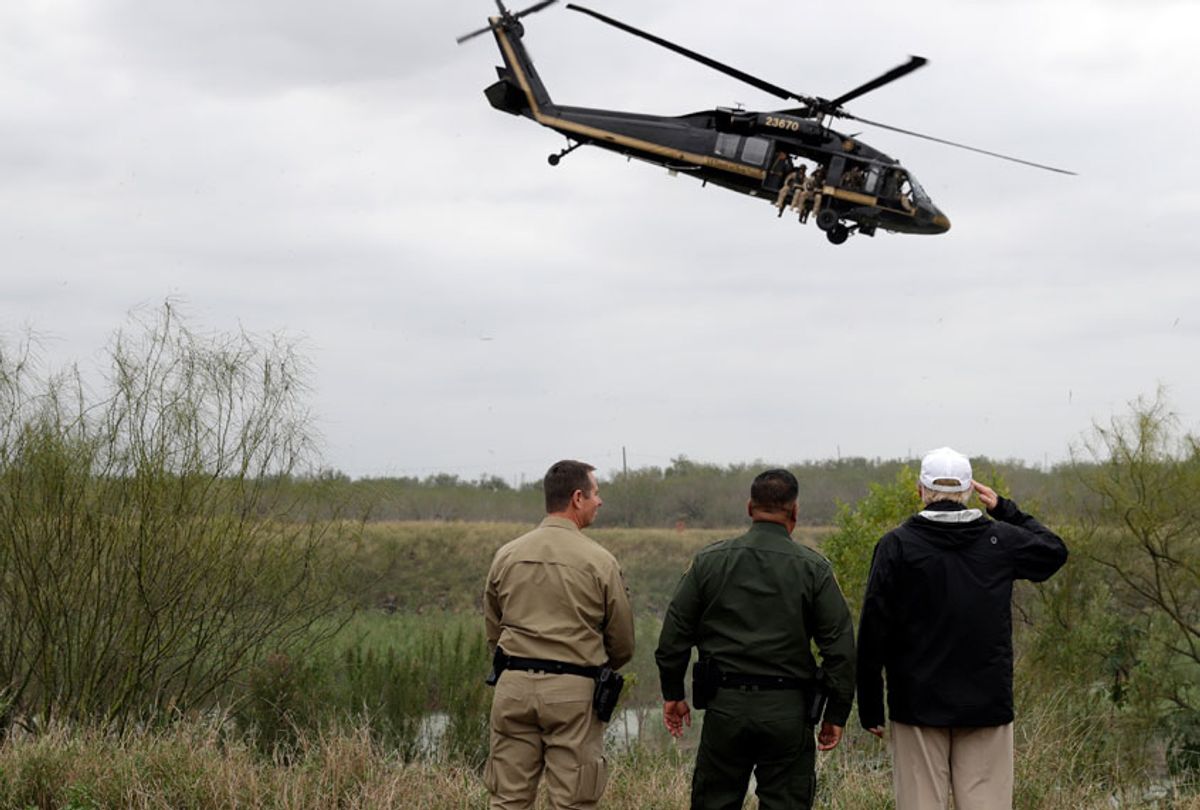 Donald Trump salutes as a U.S. customs and Border Protection helicopter passes as he tours the U.S. border with Mexico at the Rio Grande on the southern border, Thursday, Jan. 10, 2019, in McAllen, Texas. (AP/Evan Vucci)
--

Every week during the Trump administration feels like a year, but this one has been especially overwhelming. Congress is finally conducting oversight so there are multiple hearings making news every day, from the disturbing appearances by Attorney General William Barr to the delicious rematch between House Financial Services Committee chair Maxine Waters and Treasury Secretary Steve Mnuchin.

We've seen WikiLeaks founder Julian Assange arrested, President Trump's sister resigning from the federal judiciary to avoid investigation into the family's longstanding tax evasion schemes, the burning of black churches in Louisiana and a proposal in Texas to subject women who have abortions to the death penalty. Oh, and the president's for-profit country club turns out to be "a counterintelligence nightmare."

But for all that as well as the Sturm und Drang over the yet-unseen Mueller report and the back and forth over congressional prerogatives, there is one issue that illustrates the fact that heading into election season the president and his accomplices in the Republican Party are preparing for a scorched-earth campaign the likes of which we've never seen. I'm speaking of the recent purge of the Department of Homeland Security and the ratcheting up of anti-immigrant rhetoric.

Last Sunday, Homeland Security Secretary Kirstjen Nielsen was fired, reportedly because she refused to break the law at Trump's request. She had tried her best to be as cruel as he required, lying about and defending the odious child separation policy, to the point of explaining that the cages in which children were being held were not like animal cages because they were larger. Still, Trump was unsatisfied. Except for a few moments of glee when Nielsen ordered the tear-gassing of women and children at the border, the president felt she was too soft.

This dismissal wasn't entirely unexpected. Trump had abruptly withdrawn his nominee for ICE director citing his desire to "go in a tougher direction." After firing Nielsen, it became clear that he was purging the department. Prematurely naming Kevin McAleenan, the Customs and Border Protection commissioner, as Nielsen’s acting replacement, it became clear that he also had to fire the next in line by law, Claire Grady, the acting deputy secretary. She resigned on Tuesday.  The same day, Secret Service director Randolph "Tex" Alles was also ousted. Rumors abound about more "heading out the door."

The Washington Post reported on Thursday that the administration had repeatedly proposed to ICE officials that they detain immigrants and then ship them to sanctuary cities to send a message to Democrats who oppose the president's policies. The White House has confirmed that such proposals were aired.

This major move on immigration comes as the situation at the border continues to deteriorate, with thousands of asylum seekers seeking to cross in anticipation of Tump's withdrawal of foreign aid and likely changes to how the asylum laws are managed. This dovetails nicely with Trump's desire to keep this issue front and center as he shifts into full-time campaigning mode for the 2020 election. To that end he has put White House adviser Stephen Miller, an anti-immigrant extremist, in charge of immigration policy. Miller was known to be hostile to Nielsen and the ICE whistleblowers who spoke to the Post said that everyone understood Miller was behind the sanctuary cities plot.

It is clear that Trump and Miller believe that they need leadership at DHS who will be willing to go further than family separations, children in cages, tear gassing and releasing prisoners into sanctuary cities to retaliate against political rivals. I shudder to think what they have in mind, but it's fair to assume that Trump is feeling confident that Barr, who has expressed an absurdly expansive view of executive power, will sign off on anything he wants to do.

Whether the courts will go along with such draconian proposals as an executive order ending birthright citizenship, increased deportations of undocumented workers already in the U.S., or offering parents a "choice" between indefinite detention with their kids or giving them up to seek asylum is unknown. But if the rumors are true, it appears the administration may be prepared to try some or all of those things. According to CNN, Trump told Border Patrol agents that if judges "give you trouble say, 'sorry, judge, I can’t do it. We don’t have the room.'”

He's certainly ratcheting up the rhetoric:

There is a reason for all of this and it isn't just Trump and Miller's genuine disdain for immigrants from what Trump calls "shithole countries." He has an instinct for the concerns of his base but it's also likely that the political professionals are telling him that going hard on the immigration issue is vital to maintaining his hold on them.

The Atlantic's Ron Brownstein writes that the GOP of 2019 has transformed under Trump into an extreme, doctrinaire anti-immigrant political party that now unanimously backs the border wall and is ready to support steep cuts in legal immigration. (In earlier eras, the predominant pro-business wing of the party generally favored a loose immigration policy.) One reason for this new unanimity on the issue is the fact that Republican officeholders no longer represent areas of the country with any significant level of diversity. Brownstein further explains:

[T]he Republican acquiescence to Trump also reflects the larger reality that the party is now relying on an electoral base preponderantly tilted toward the white voters most hostile to immigration and most uneasy about demographic change overall — what I’ve called “the coalition of restoration.” Those attitudes, with only a few exceptions, are dominant not only among the white Republicans without a college degree who comprise Trump’s base, but also among the college-educated Republicans who have expressed more qualms about other aspects of Trump’s behavior.

In other words, hostility to immigrants is the glue that's holding his coalition of white voters together. Those without college educations, conservative evangelicals and the like, will stick with him. But those white college-educated types who don't care for his antics are still with him on this issue and he can't afford to lose them.

Trump is the indisputable leader of this anti-immigrant coalition, but he became the leader by listening closely to what these folks wanted to hear and giving it to them. As one Republican strategist told Brownstein:

This is 20 years in the making. The party has been doing this pre-Trump, but he put the exclamation point on it. It’s not the same party. I’ve told folks, ‘This is the party. And you are not going to change it.'"

Trump and Stephen Miller have no intention of trying to change it. They believe it's their ticket to a second term. And they are clearly willing to push the legal and constitutional envelope as far as necessary to make that happen.