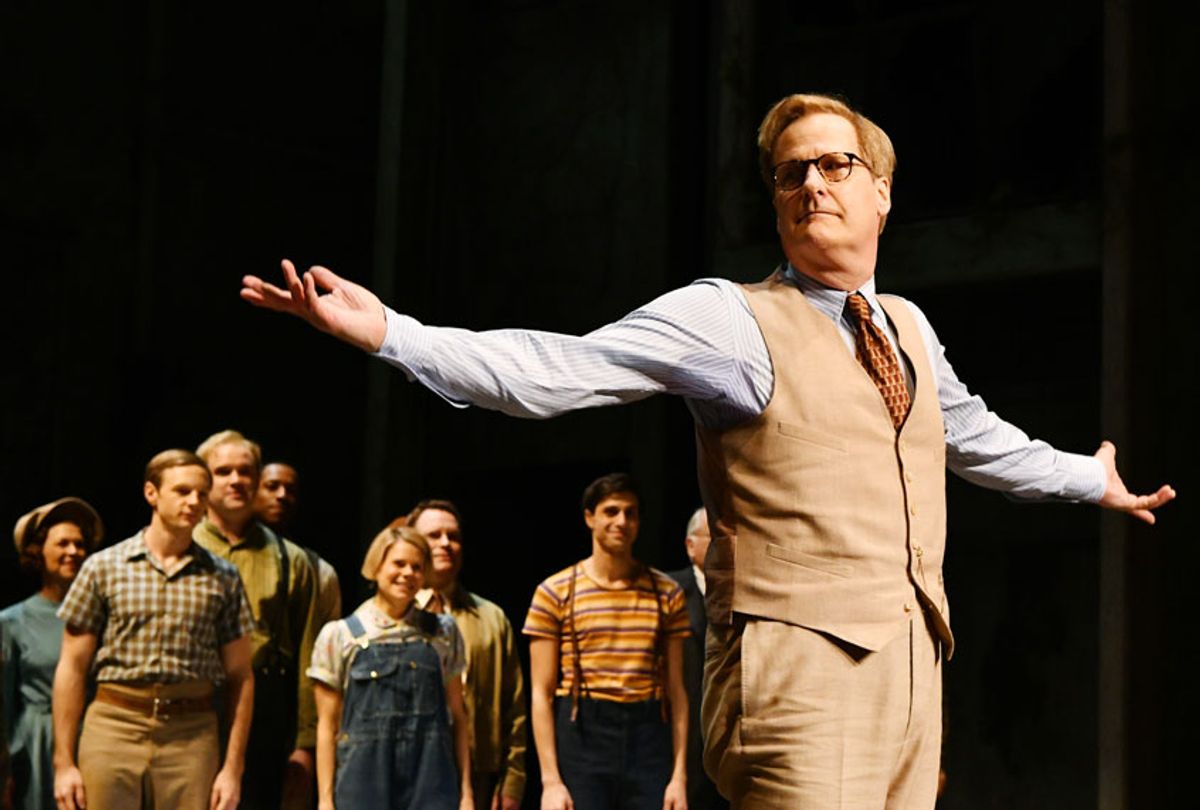 Jeff Daniels takes a bow during curtain call after the opening night performance of 'To Kill A Mocking Bird' at the Shubert Theatre on December 13, 2018 in New York City. (Slaven Vlasic/Getty Images for 'To Kill A Mockingbird')
--

"What does a Broadway actor do when he has the flu?" rasps Jeff Daniels. The two-time Emmy winner has an espresso and the bleak countenance of a man with a gruesome virus. Then he answers his own riddle: "Eight shows a week."

"To Kill a Mockingbird" is back in a new Broadway stage play, adapted by Oscar- and Emmy-winning writer-director Aaron Sorkin and directed by Tony winner Bartlett Sher. Leading the stellar cast is Daniels as small town attorney Atticus Finch, and three-time Tony nominee Celia Keenan-Bolger as his tomboy daughter Scout. In the midst of a particularly grueling week, the two actors graciously joined us on "Salon Talks" to discuss how they reinvented Harper Lee's classic characters and why the story feels especially relevant right now.

Celia, You probably thought that your days of having the opportunity to play Scout were behind you by a year or two.

Celia Keenan-Bolger: I remember when this show was announced. I did think, "What lucky little girl is going to get to play that part? I am so jealous of her."

You know this role. You know this character. You used to bring clips of her dialogue from the novel to auditions when you were just starting out.

Jeff Daniels: Did you really?

Keenan-Bolger: Yes. I was asked to do a monologue. I was auditioning for "The Grapes of Wrath" at the Hilberry Theater, and my parents were like, "We don't know what a monologue is. We don't know where you find a monologue." My mom said, "Well, you could maybe do a part from 'To Kill a Mockingbird,'" a book that I loved. She was like, "That's a young person who has a lot to say." So we cobbled together the Mr. Cunningham speech. That was what I used a couple times.

You are the reason that this cast has this very unusual premise of having adults playing the children's roles of Jem and Dill and Scout. You went in just to read it, when it was just a table read.

Keenan-Bolger: I was told, "This will never be your job, but Aaron has his first draft, and he needs to hear the play out loud." We did two days, and so they just felt like having an eight-year-old cold read Aaron Sorkin's language, [Sorkin] wouldn't get to learn what he needed to learn. As I started it, I was like, "Good luck to the eight-year-old," because this is dense and hard. Then as that reading went on, they just started thinking, "Maybe this could work. Maybe we don't actually have to hire kids."

When Bart first said that, I was like, honestly, if you told me you were going to do "To Kill a Mockingbird" with adults, I would tell you I don't really want to see that. But, as we continued to work on it, I think now it's the most theatrical device possible. It makes it so of the theater, the fact that we are able to bounce back between being grown-ups and kids.

Daniels: It's such a tricky role she's got, and Will [Pullen] and Gideon [Glick] as Jem and Dill. It's so tricky, because they go in and out. When we went over the first preview on November 1st, one of the questions was, "Will the audience, especially those who love the book, accept adults playing kids?" We didn't know.

In the rehearsal room, we're going, "Well, we think it works," but we didn't know. That was a big gamble.

But it really reminds you that it is a memory story, that it is Scout remembering. It's not her experiencing in the moment. It is not a God's-eye view of this story. It's a personal story of a woman remembering this very pivotal point in her life.

Keenan-Bolger: And it's so much more fun to get to do both, as opposed to, say, casting an adult Scout and a kid Scout. I think that would also be something you could do in the theater. But I think this is so much more of a challenge. It's so much more gratifying. And it does something for the audience to go on this journey, both watching us play kids but also looking back on the story as adults. It allows the adults an in, in a different way than maybe if it was played only by kids.

We had the stars and writers of Hulu's "PEN15" in a couple of weeks ago, and they're two grown women playing middle schoolers. They said when you can just accept these are adult women, there's a degree of safety that then you as an audience feel about what the actors are doing.

And there's a different kind of approach to then the story itself. You are seeing it through this different lens, and this would be a really tough role for a real eight-year-old to play. This brings me to, of course, Aaron Sorkin.

Jeff, you have this incredible connection with his work now. About five years ago, you were ready to maybe step back from it all.

Then this role comes along.

That changes the game for you. Then Aaron Sorkin approaches you not too long ago, and says, "I'm doing this version of 'To Kill a Mockingbird,' and I'm writing Atticus for you."

Once you figure that out, then you can hear the music of it, the melody that goes in the way he writes. Then you're kind of in.

They got the rights. [Sorkin] just turned to me one day. We were doing press for the Steve Jobs movie together, and he said, "Scott Rudin just got the rights to 'Mockingbird.' Would you like to play Atticus?" I said, "So I should read the book?" Because I'm an idiot.

Seriously, though, how does one avoid this novel in their lifetime?

Daniels: Well, you avoid it by reading "The Hardy Boys." You read "Chip Hilton." You don't read the great works. You go to a public school that says, "Here's one Hemingway, here's 'Lord of the Flies,'" and then, "See you in college."

"Mockingbird" just wasn't on the list, and you never got around to it. You heard about the movie, but you didn't really watch it. Then Aaron says, "You want to do it?" and you go read the book. You go, "OK. All right." Then you watch the movie, and you go, "All right. OK."

After "Newsroom," too, I'm of the age where if I'm not challenged, I just lose interest. That was part of the reason for just getting out. I just was not going to be that actor standing there, next to some 28-year-old making ten million who barely knows his lines, and I'm playing his father. I can't do it.

And then, all of a sudden, here's "Newsroom." Here's Atticus Finch, and you're going up against Gregory Peck on Broadway in this whole new adaptation. You're going, "That's a challenge. Let's rise to that."

You know this is a thing that's going to get people's attention. Yet everything that I've read about your approach to this role and to this character has been that you did not see Gregory Peck as a mountain that you had to climb. You just kind of said, "I'm going to make this my own, and I'm going to give my best every single night."

Daniels: Well, you have two choices. You can be intimidated by what he accomplished, and he accomplished a lot. Many people think of him as the Atticus Finch, the definitive portrayal, and he won an Oscar for it. So you can pay attention to all that and look at it like Mount Everest, or you hit delete. You hit delete so that you can say, "All right. Here's what I'd do with it," with a completely different script, completely different medium, the stage. We're not in front of a camera, doing six lines and then cutting. We're out there. It's Aaron Sorkin. It's a river of words. So I approached it like we approach everything. We originate roles. That's what I had to do.

There are a lot of shows that are based on books, that are based on films, and there is an expectation in this business where the stakes are high, financially, that the audience is going to want you to come in and do the movie. There are shows out there right now that are the movie — which is fine, because that's what makes money and that's what entertains people. But this is very different.

You don't see the porch. You don't see the tree. You don't see a cozy town in Alabama. You see an abandoned warehouse and three grown-ups, one holding a newspaper, talking about facts and whether the facts that she was given all those years ago hold up. I think, in a really amazing way, that sets the audience on a course to say, "Okay. Well, I don't even know where we are. Where are we in space? Who are these people? Why are they asking these questions?" And, in a good way, it sets them up to watch the rest of the play.

Keenan-Bolger: When people come back and they're like, "I can't believe how relevant it is," I want to say, "That's not by mistake." That's completely intentional on Aaron's part, and that's why it's an incredible adaptation, because exactly what you're saying. He hasn't changed anything. He took what Harper Lee wrote and then teased out the themes that he felt needed reexamining in 2019.

Speaking of topical relevance, you have performed this in front of the Clintons. I heard Hillary leaned over to someone and said, "She's really good."

Keenan-Bolger: That's the tale. I don't know that that's true, but I'll take it. They were very generous after. I mean, Bill Clinton said, "I used to want to be Atticus Finch, and now I want to be Jeff Daniels."

You were just down in Washington, D.C. this week, doing a very special performance. I would love for you to talk a little bit about what it was like doing a truncated version of this show with Nancy Pelosi introducing it and saying that, right now, there's a hunger for stories about decency.

Keenan-Bolger: I don't think she's wrong. I think during the Obama administration, there was such a cultural vibrancy in D.C. They just really valued the arts, and so it felt like this place where, in the White House, often you would get to see performances, or have different artists were always occupying a space. That just has not been the case for the last two years, and so to be in D.C. and to do this play at the Library of Congress was really very moving.

When we were rehearsing it on Sundays before our matinee, I thought, "Can you take scenes from a play and put them up for 450 teenagers? Will this work? Does that work to just do scenes?" I feel like when you do a musical, you can go and do a musical number, and it stands alone. It's impressive, and it's what it is.

We started, and these kids just sat forward and were really with us. It's a testament to Aaron and that the writing is so good that even if you pluck six scenes that don't necessarily go from one to the other and put them up, you can still get a really good sense about who these people are, and what they're going through.