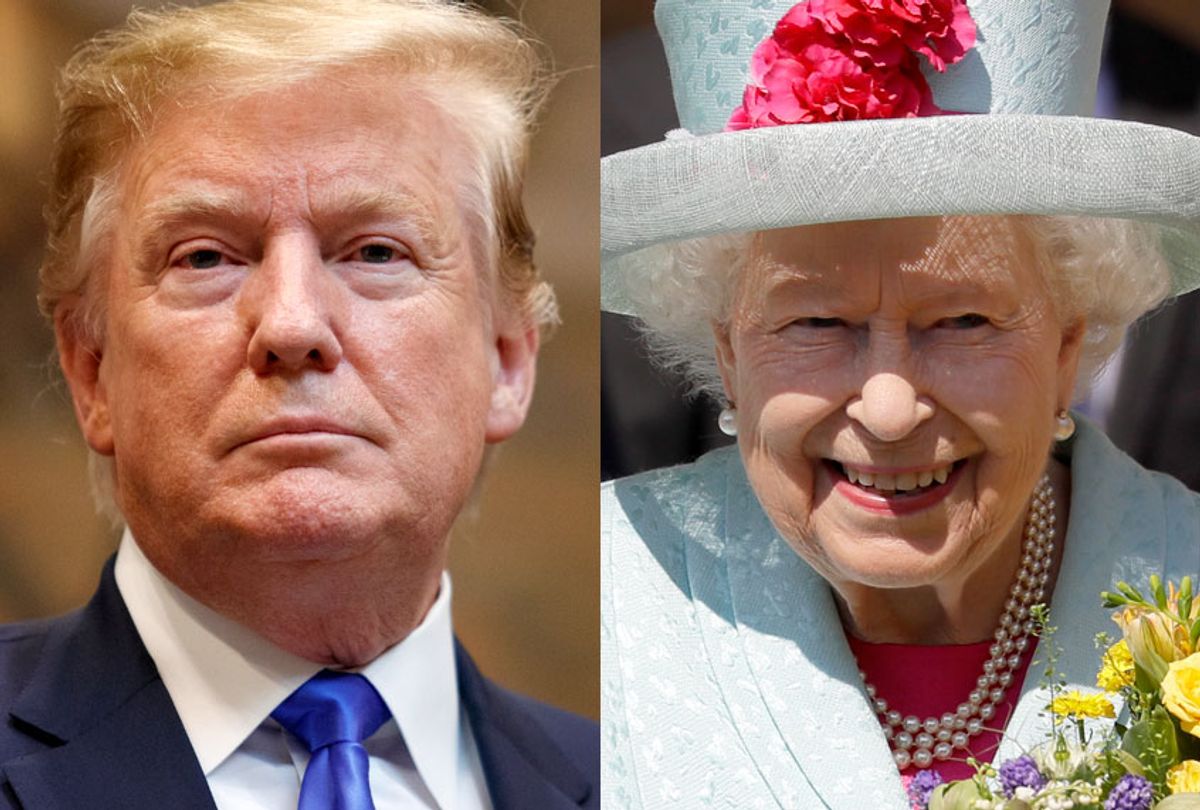 God, save the Queen!

An editorial published in a British newspaper called for the cancellation of President Donald Trump's upcoming state visit to Britain in the wake of the release of a redacted version of special counsel Robert Mueller's report detailing his nearly two-year investigation into allegations of collusion between Trump's campaign and Russia during the 2016 presidential election and whether the president himself attempted to obstruct the inquiry.

"The prospect of Donald Trump making a state visit to Britain in June is stomach-churning," The Observer, the sister paper of The Guardian, wrote Sunday. "The corruption investigation led by special counsel Robert Mueller, whose damning report was published last week, provided ample evidence of what we already know: Trump is unfit to hold the office of president of the United States."

"By his words and actions over two wretched, destructive years in power, he has proved beyond doubt he is no friend of Britain," the newspaper continued.

The editorial called Trump an "unworthy man” and said honoring him with a state visit, including an address to parliament and a carriage ride with Queen Elizabeth II, is "misjudged" and would "give an underserved boost to a wounded charlatan." It also criticized the president's "reactionary policies" on climate change, immigration, race, multilateralism, Yemen, nuclear arms and civil liberties.

"If Americans are content to allow a habitual liar who has presided over systemic illegality, numerous ill-concealed attempts to obstruct justice and a foul-mouthed culture of venality and vendettas to continue to lead their country, that is a matter for them. But the British people cannot be expected to collude or condone such misbehaviour," the newspaper wrote.

In his report, Mueller did not establish that Trump or any of his campaign aides had coordinated with Russia. He also did not reach a conclusion on whether Trump had obstructed justice, although he identified ten episodes of possible obstruction by the president – including previously unknown efforts in which he allegedly pushed former aides to undermine the special counsel's investigation.

Trump has claimed the report to be a “total and complete exoneration," and pushed back against damning descriptions of his behavior in the 448-page document, saying they're "total bulls**t."

Although he ultimately did not bring criminal charges against the president, the special counsel "nevertheless lit the fuse to a very large bomb located under Trump's Oval Office desk," The Observer argued. By identifying instances of possible obstruction of justice by the president, the newspaper continued, Mueller has "effectively laid out a road map, and grounds for future indictments, that Congress - Democrats and Republicans - has a duty to pursue."

"Until the door shuts on Trumpgate - and the sooner the better - Trump will remain an international liability," the editorial wrote. "He is not welcome here."

In recent months, most Democrats have appeared to defer questions about ousting Trump until Mueller's investigation concluded. But even as the special counsel last week disclosed at least ten times the president may have obstructed justice, the party's leadership has responded to Mueller's report with exceedingly cautious remarks about impeachment, demands for the special counsel's unredacted findings and calls for further hearings. Others have simply dodged the subject altogether.

Questions about whether they should impeach Trump in the fallout of Mueller's report will come to a head Monday as House Speaker Nancy Pelosi, D-Calif., will addresses the special counsel's report in a conference call with her caucus. While it remains unknown whether Pelosi will bring up impeachment directly, the question of whether to initiate impeachment proceedings against Trump will likely be on the minds of many liberal lawmakers.

Still, removing Trump from office would be an uphill battle. Voting on articles of impeachment requires only a simple majority in the House, where Democrats have a majority. The president's case would then move to the Senate, where two-thirds of all senators would need to agree to convict the president on any count. If that happens, a president is automatically removed from office. At least twenty Senate Republicans would need to join Democrats and vote to remove the president, and it's unlikely enough GOP senators would vote as such. Following Mueller's report, a majority of Senate Republicans did not appear to be put off by the picture Mueller paints of Trump.

For now, whether the Democrats pursue impeachment against Trump is anyone's guess.