For the first time, NASA lander feels an earthquake on Mars

The first earthquake has been detected on Mars. Here's what we know so far 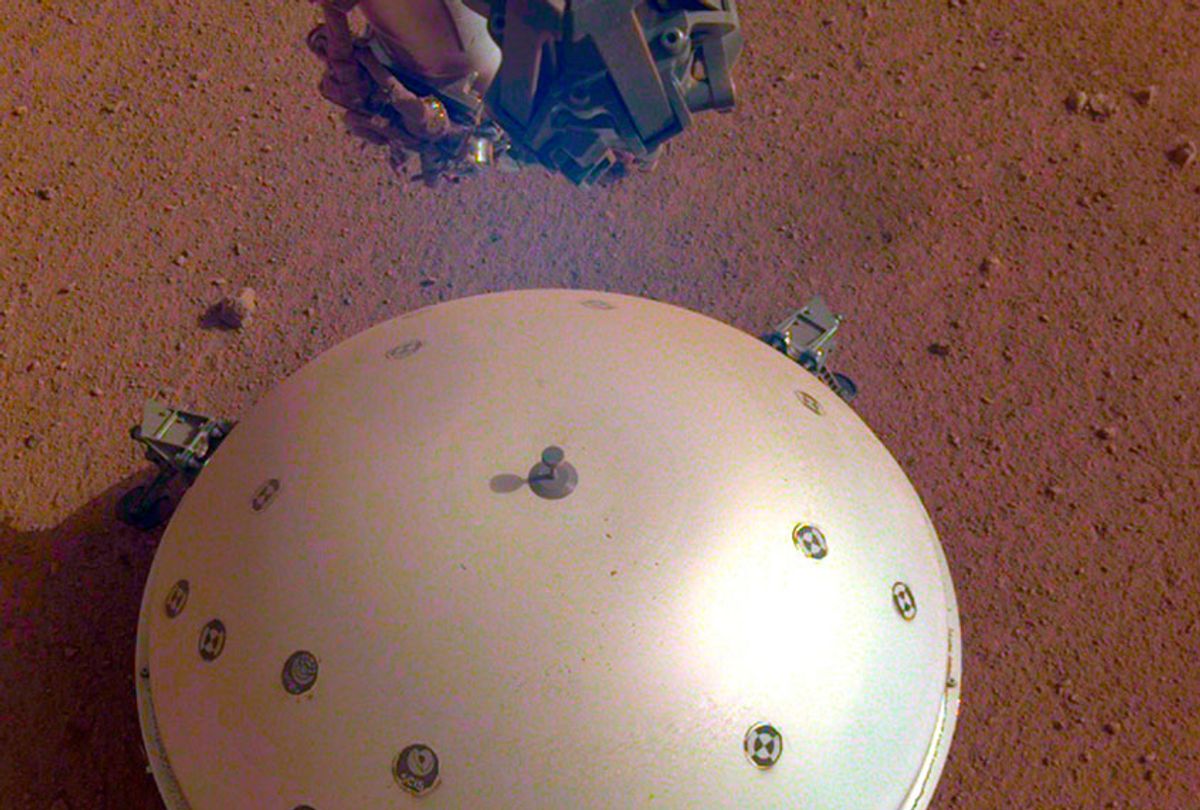 This photo made available by NASA on Tuesday, April 23, 2019 shows the InSight lander's domed wind and thermal shield which covers a seismometer on the 110th Martian day, or sol, of the mission. On Tuesday, the space agency announced the instrument picked up a gentle rumble, believed to be the first marsquake ever detected. (NASA/JPL-Caltech via AP)
--

The first-ever "marsquake" — meaning, an earthquake, but on Mars — was detected by NASA’s InSight lander earlier this month, scientists confirmed yesterday. The small stationary lander had previously detected small "seisms," or minor seismic activity, though those rumblings did not originate from geologic activity but rather from atmospheric pressure. Yesterday's confirmed detection marked the first time that geologic activity had been directly observed on another planet by a surface probe.

InSight detected these faint seismic trembles on Mars’s surface on April 6, four months after it landed on the planet in November 2018. It is the first extra-planetary quake to be detected — previously, science had only observed earthquakes and moonquakes.

The French space agency CNES said on April 23 that the marsquake was "weak" — more akin to a moonquake than the massive earthquakes our home planet occasionally suffers.

“We thought Mars was probably going to be somewhere between Earth and the Moon” in terms of quake size, Renee Weber, a planetary scientist at NASA’s Marshall Space Flight Center in Huntsville, Alabama, told Scientific American. “It’s still very early in the mission, but it’s looking a bit more Moon-like than Earth-like.”

The tremor was reportedly so weak that, had it occurred on Earth, it would not have been detected by our seismometers.

As David Mimoun, a scientist working on the mission, told Scientific American: “It’s so small that at the beginning we were wondering if it was a quake or something else.”

It is still unclear what kind of geological activity caused the marsquake — whether it originated deep within the planet, or was a result of a meteorite crashing into its surface.

More information will likely surface as InSight continues its mission. As Salon reported in November 2018, the two-year mission is partly geologic, as its tools will help understand Mars' crust and mantle. In addition to relying on the seismometer, the lander's Heat Flow and Physical Properties Package will burrow nearly 16 feet into the ground to study Mars below the surface. Ultimately, the lander's science will help contribute to an overall picture of the history of the solar system, and how Mars, Earth and the other planets formed and evolved.

"InSight will study the interior of Mars and will teach us valuable science as we prepare to send astronauts to the Moon and later to Mars,” said NASA Administrator Jim Bridenstine in a statement.

Understanding marsquakes will give scientists a better understanding of how Mars' formation differed from that of the Earth and our moon.

InSight launched from Vandenberg Air Force Base in California on May 5, 2018.