Long live Ser Brienne of Tarth: An argument for a "Game of Thrones" knight's survival

Odds are our favorite fighting woman won't make it through the Battle of Winterfell. But what if she does? 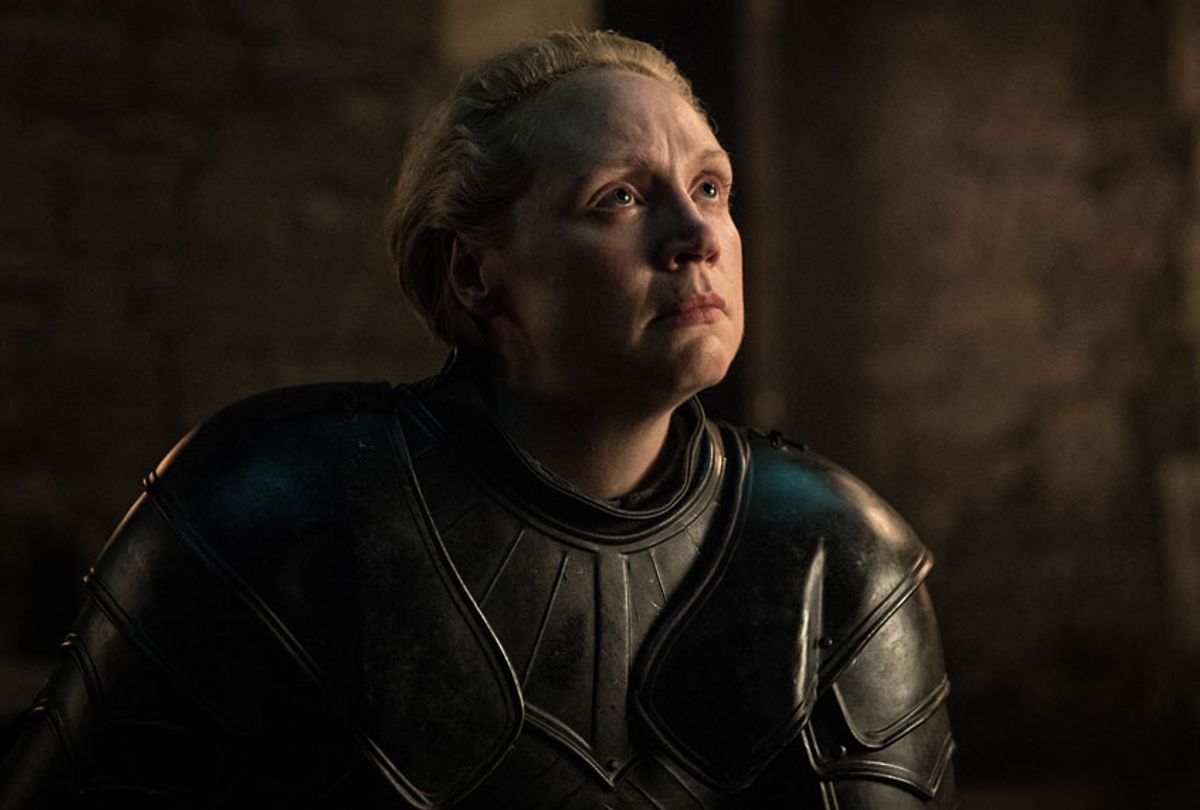 Obsessed as “Game of Thrones” viewers have been over the circumstances surrounding Arya Stark’s deflowering, the significance of Brienne of Tarth (Gwendoline Christie) being knighted has, in general, received less extensive contemplation.

It’s probably safe to presume that viewers invested in Ser (!) Brienne’s adventures and character development — and minus a few incels, that should describe most of the audience — are over the moon by Jaime Lannister’s (Nikolaj Coster-Waldau) fireside, pre-battle move to bestow knighthood upon the woman who has served as his spiritual savior and partner-in-arms during a key scene in "A Knight of the Seven Kingdoms."

Similarly, most of those same people who became teary at hearing the words, “Arise, Brienne of Tarth, a Knight of the Seven Kingdoms!” likely welled up anew moments later while contemplating what that three-minutes-to-midnight blessing probably means.

In addition to placing his blade on each of her shoulders, charging her to be brave in the name of the Warrior, to be just in the name of the Father, and to defend the innocent in the name of the Mother, he might as well have given her a lusty smooch of death. Yes, the few stories that celebrate Brienne’s long, arduous journey to receiving an honor she’s always desired — but had accepted she would never receive — place her at the top of next episode’s death list.

But do we dare entertain the notion that Brienne’s knighthood intentionally has a place in whatever scenario is left following the Night King’s (also presumed) defeat? Maybe that’s foolish, knowing what we know about this show and the way TV generally works — long suffering characters tend to get the things long denied them right before they croak. Watching the scene from the next episode, with Jaime and Brienne in the vanguard as the army of the dead closes in, doesn’t make her odds of survival seem any better.

But on “Game of Thrones,” certain developments serve a higher purpose in the broader arc of this world. Often their real utility only becomes plain a few episodes or even seasons later — although at this point, we only have a few hours to go in the entire tourney. Equally as often that purpose is hinted at in the writing surrounding said developments. Prior to Brienne and Podrick joining Jaime and Tyrion (Peter Dinklage) by the fire, Tyrion makes what could be a telling comment: “To the perils of self-betterment,” he says.

Sometimes the action in a scene of a film or TV show is simply what it is: propulsion, a means of moving the plot from one point to the next, ticking off a few boxes along the way for whatever purpose the writers deem necessary.

In “A Knight of the Seven Kingdoms” many of the exchanges are crafted to serve the desires of the show’s fans one last time before what is sure to be a mass culling of the ranks. Major and second-tier characters alike receive a few lines to remind us of why we would be (and likely will be) heartbroken to watch them be shredded by wights or impaled on a white walker’s javelin.

However, it’s meaningful that the opening pair of season 8 episodes are heavily sprinkled with callbacks to previous seasons. Some of this is meant to be the writers' version of a retrospective, as if saying to the audience, “Hey, remember the first time these characters met and when A said X to B? Good times.”

Others, though, are meant to prick up our ears about what a person or a thing symbolizes to the greater philosophical truth of this world.

At the very beginning of the series, the most honorable leader in all of Westeros, Ned Stark, follows the rule of law and nobly give his deceitful adversary a window of exit which, as we all know, was stupid. Stupid, stupid Ned Stark. And in every significant political move that happens afterward, victory is often achieved by subterfuge.

Cersei Lannister (Lena Headey) sits on the Iron Throne because she forgoes the law altogether, refusing to stand trial in court for her crimes and opting, instead, to immolate the entire place with wildfire. She loses her son Tommen with that move, but no quest for power is without cost.

Yet to be established, however, is the price of Cersei’s general immorality with regard to the realm itself.  Remember that “Game of Thrones,” like so many fantasy series, is constructed with a keen sense of metaphysical symmetry.

There are few actions that do not yield an equal and opposite reaction: A man and a woman fall in love with each other even though they are promised to others, and their secret romance ignites a war that splits apart an entire realm; a young king, undefeated in battle, follows his heart and breaks his political pledge, and nearly drives his noble house to the edge of extinction.

The question is whether said actions manifest as direct one-to-one payback or serve as the middle spheres in a narrative Newton’s Cradle — not moving much, but transmitting the force produced by an adjacent object on one end to send its twin on the opposite side flying it the air, before it returns its own wallop in kind.

Thus as the story begins, power at any cost defeats honor, easily. Which brings us back to that all-important fireside chat. Facing down imminent death, Brienne's initial response is, “At least we’ll die with honor.”

In a previous episode Daenerys Targaryen (Emilia Clarke) famously likens the politics of Westeros to a wheel spinning round and round, with one noble house ending up on top, then another, and on and on. But perhaps she was using the wrong symbol; no matter. Her declared determination to break the standing operating system stands.

Of course, this was several seasons ago, when the Iron Throne was an ocean away as opposed to a dragon flight. As night closes in on this series and the dark shivers with terrors, nobody is thinking about wheels or games. Top of mind is the wave of erasure marching toward them; that’s the real wheel crusher.

But if death’s hordes wipe the slate clean, decimating most of the noble houses in the process, what kind of ending would this story be left with? Daenerys now sees Jon Snow (Kit Harington) less as her partner and lover than a threat to her potential rule. For her to win, some part of the Stark honor must be compromised or destroyed. If Cersei wins, that says something about the triumph of greed and evil. Appropriate, maybe, but not a suitable ending to a hero’s journey that’s lasted the better part of a decade.

In whatever version of the world that follows, wisdom has a part to play — hence Dany’s insistence that Tyrion stay out of the fight. But maybe the bigger surprise series creators D.B. Weiss and David Benioff have in store for us is that the arc of justice in Westeros ultimately swings back to an age of honor.

Brienne’s story with Jaime is one of a redeemer and the redeemed: he was branded a traitor, the Kingslayer, because of a cosmically honorable act that forced him to break a code designed by noble men. After hearing the Mad King’s orders to burn all the residents of King’s Landing alive on top of being ordered to murder his own father, Jaime says he killed the royal pyromancer before stabbing the Targaryen king in the back.

And who was the man who spread the story about Jaime breaking his oath and killing the king? Honorable Ned Stark.

I’ve written before that George R.R. Martin may upend the rule of modern mythmaking, denying “Game of Thrones” addicts a happy ending in exchange for one that rings true. The end of the world, by definition, holds no joy. But in the new beginning to come afterwards, a knight of Ser Brienne of Tarth’s caliber could have an important role to play, redefining what true honor means in the wake of so much inhumanity.

Maybe the lesson at the end of it all is that while power rises, honor — true, humane honor — must prevail by necessity. And maybe all this time we’ve been looking at the wrong woman when we envision a queen fit to care for the realm.

The odds tell me this is wishful thinking. But it costs nothing to hope that this guess is right.