Another synagogue shooting: Of course Trump won't crack down on white supremacist terror

A right-wing terrorist attacks another house of worship, even as Donald Trump doubles down on "very fine people" 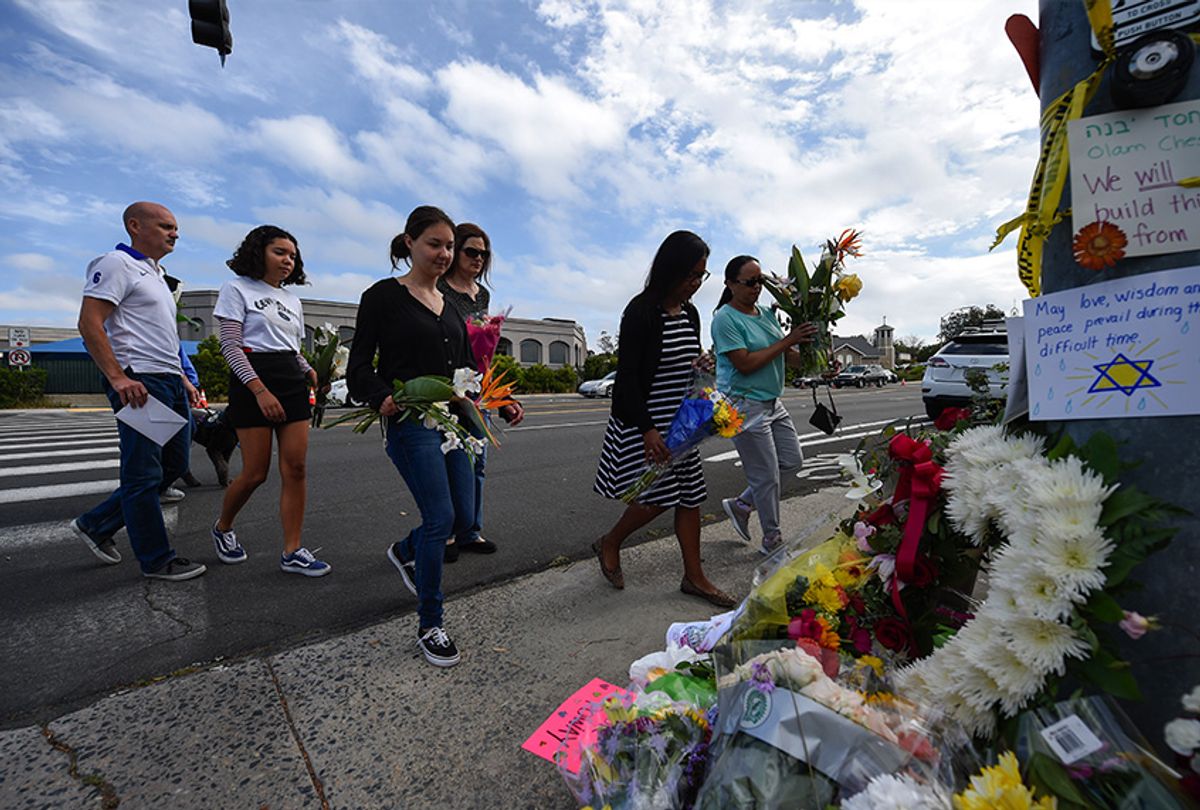 A group of Poway residents bring flowers and cards to a memorial outside of the Chabad of Poway synagogue, Sunday, April 28, 2019, in Poway, Calif. A man opened fire Saturday inside the synagogue near San Diego as worshippers celebrated the last day of a major Jewish holiday. (AP Photo/Denis Poroy) ((AP Photo/Denis Poroy))
--

On Saturday an avowed neo-Nazi entered the Chabad of Poway synagogue in San Diego County, California, shouted anti-Semitic slurs and then opened fire with an AR-15 "assault-style" rifle. This right-wing terrorist allegedly killed one person -- a woman named Lori Gilbert Kaye, who was reportedly attending Saturday services to pray for her mother, who had recently died -- and injured three others, including a child.

This is but the most recent example of a rising tide of hate-fueled and often lethal right-wing violence in the United States and around the world.

Such evil is not an outlier or coincidence but rather part of a much larger pattern.

The 19-year-old white supremacist attacked the Chabad of Poway on the six-month anniversary of the Tree of Life Synagogue massacre in Pittsburgh. In an example of the global "race war" strategy historian Kathleen Belew warns of in her new book "Bring the War Home: The White Power Movement and Paramilitary America," this weekend's attacker in Poway attacker cited other neo-Nazi mass murderers as inspiration.

The neo-Nazi who massacred 50 Muslims in Christchurch, New Zealand, last month specifically cited Donald Trump as his inspiration and a "symbol of renewed white identity."

Despite Trump's family connections to Judaism, he himself has repeatedly trafficked in anti-Semitic tropes such as disparaging Hillary Clinton with images of money and the Star of David and suggesting that liberal donor George Soros, who is Jewish, was coordinating an "invasion" of White America.

Many of Trump's closet advisers, most notably de facto immigration czar Stephen Miller, can reasonably be described as white supremacists. Trump is also considered a role model and hero by prominent white supremacists such as David Duke and Richard Spencer.

A day before the attack on the synagogue in California, Trump again, defended the neo-Nazis, Ku Klux Klan members, and other "alt-right" racists who ran amok in Charlottesville, Virginia, during a lethal hate-fueled riot in the summer of 2017.

Despite all the evidence to the contrary, Trump believes that white supremacists and other right-wing terrorists are not dangerous. For him, they are just a "small group of people" who have "problems." Among their number, evidently, are some "very fine people."

Who is counted as part of this group?

Coast Guard Lt. Christopher Hasson was arrested by federal law enforcement and other authorities in February for planning to kill prominent Democrats, members of the news media and others in a "race war," with the goal of protecting Donald Trump from being impeached or otherwise removed from office. To accomplish this goal, Hasson amassed a huge arsenal of weapons and even went so far as to compile a "kill list" of those people he planned to assassinate.

Attorney General William Barr has so far not exercised his authority to pursue other charges against Hasson, an unrepentant and extremely dangerous right-wing terrorist who was apparently planning a murder spree. Does anyone think this would be the case if Hasson were Muslim, black or Latino?

It should be no surprise that Hasson will likely go free. The Trump administration has defunded Homeland Security programs and other law enforcement initiatives targeting white supremacists and other right-wing domestic terrorists.

Who does Donald Trump consider to be a terrorist threat?

Trump, like other conservatives and Republicans, believes that most if not all Muslims are a part of a terrorist plot against the United States and the broader white West. He has repeatedly -- and now successfully -- imposed a de facto ban on Muslims entering the United States. Trump's regime continues to harass and threaten Muslims living in America -- with one of the most prominent targets being Rep. lhan Omar, D-Minn., one of the first two Muslim women to serve in Congress.

Trump, along other conservatives and Republicans, believes that Hispanic and Latino immigrants, migrants and refugees are a "race" of rapists, murderers and thieves. He has suggested they are somehow allied with Islamic terrorism or ISIS.

Trump, like other conservatives and Republicans, believes that the Black Lives Matter movement (so-called "black identity extremists") is a "threat" because its members dare to demand that the human and civil rights of black people (and all other people) be fully respected in America and around the world.

Antifa, the decentralized coalition of individuals and groups who believe that white supremacists, neo-Nazis and other fascist-authoritarians must be confronted in the streets, is also viewed as a threat by the Trump regime and its allies. It would seem that in the Age of Trump the United States, one of the leading nations that defeated the Nazis and other fascists during World War II -- now coddles the Nazis' descendants.

What explains this divergence between the way white right-wing domestic terrorists are treated in America and the way other groups are treated? Overt racists and other right-wing extremists (who are increasingly the mainstream of today's conservative movement) are among Trump's most loyal and enthusiastic supporters. Therefore he will never publicly or enthusiastically condemn and disavow them.

Despite overwhelming empirical evidence to the contrary, whiteness is imagined as being always and inherently benign by many white Americans. This has been true for centuries.

There is a also a cultural script used in America by the mainstream news media and other opinion-shapers to discuss white people who commit horrific crimes such as mass murder. In that narrative such a person is a "lone wolf" or "mentally ill," and often presented in a sympathetic light. This recent profile of the alleged Poway synagogue shooter depicts him as a "good churchgoing boy" from a "religious family," the son of a church elder who carried with him a terrible "secret."

The law is not and has never been neutral along the color line. Samantha Michaels writes in Mother Jones:

Prosecutors have described Hasson as a “domestic terrorist,” but they’ve only charged him with possession of unregistered and unmarked silencers, possession of 15 firearms by an unlawful user or a drug addict, and simple possession of a controlled substance. As a result, Judge Day said pretrial detention would not be appropriate, and that he would convene a later hearing to discuss a strict supervision arrangement for Hasson, likely including electronic monitoring and other conditions. Until then, Hasson remains in jail. “We have got to have someone who has eyes and ears on him like nobody’s business,” the judge said, according to the Washington Post.

Why hasn’t Hasson been charged as a terrorist? In part, it’s because US terrorism laws make it harder to convict for certain acts of violence if they are motivated by white supremacy.

There is also an even more basic explanation. Right-wing terrorists tend to attack those individuals and groups which Donald Trump, along with his movement and compliant media, view as "the enemy." Ultimately, the use of right-wing paramilitaries, border militias and white supremacist terrorists are key tools in the Trump movement's more general assault on the United States from within. He has no reason to stop them.

In George Orwell's "1984," he describes a totalitarian regime whose leader manipulates and controls the emotions of the public:

The horrible thing about the Two Minutes Hate was not that one was obliged to act a part, but, on the contrary, that it was impossible to avoid joining in. Within thirty seconds any pretence was always unnecessary. A hideous ecstasy of fear and vindictiveness, a desire to kill, to torture, to smash faces in with a sledge-hammer, seemed to flow through the whole group of people like an electric current, turning one even against one's will into a grimacing, screaming lunatic. And yet the rage that one felt was an abstract, undirected emotion which could be switched from one object to another like the flame of a blowlamp.

Donald Trump stands in the center of such a human maelstrom.

As reported by CNN, Hasson's attorney summarized this perfectly, telling the court: "I fear that through the vivid imaginations and colorful writing of the prosecutors, the case has developed a profile that does not line up with the facts."

Oyer referenced President Donald Trump multiple times, comparing her client's racial slurs and targeting of Democrats and the media to similar views that the President has taken.

She added that while the racial slurs Hasson allegedly used in private writings were condemnable, they are now part of the "national vocabulary."

Donald Trump's cult-like supporters act on his encouragements to violence. Others who may, however dishonestly, claim not to be affiliated with Trump or his movement are nonetheless still empowered by the permissive environment for racism, bigotry and violence that Trump both encourages and cultivates.

On Saturday, Trump wrote on Twitter: “My deepest sympathies go to the families who were affected.... Looks like a hate crime. Hard to believe … looks like the person was apprehended."

These are the words of a pathological liar, feigning sympathy and human concern for others. Despite this mandated and expected public performance of grief and concern, Trump has through his words, deeds and policies repeatedly given aid and comfort to neo-Nazis, white supremacists and right-wing terrorists. They will continue to respond accordingly.