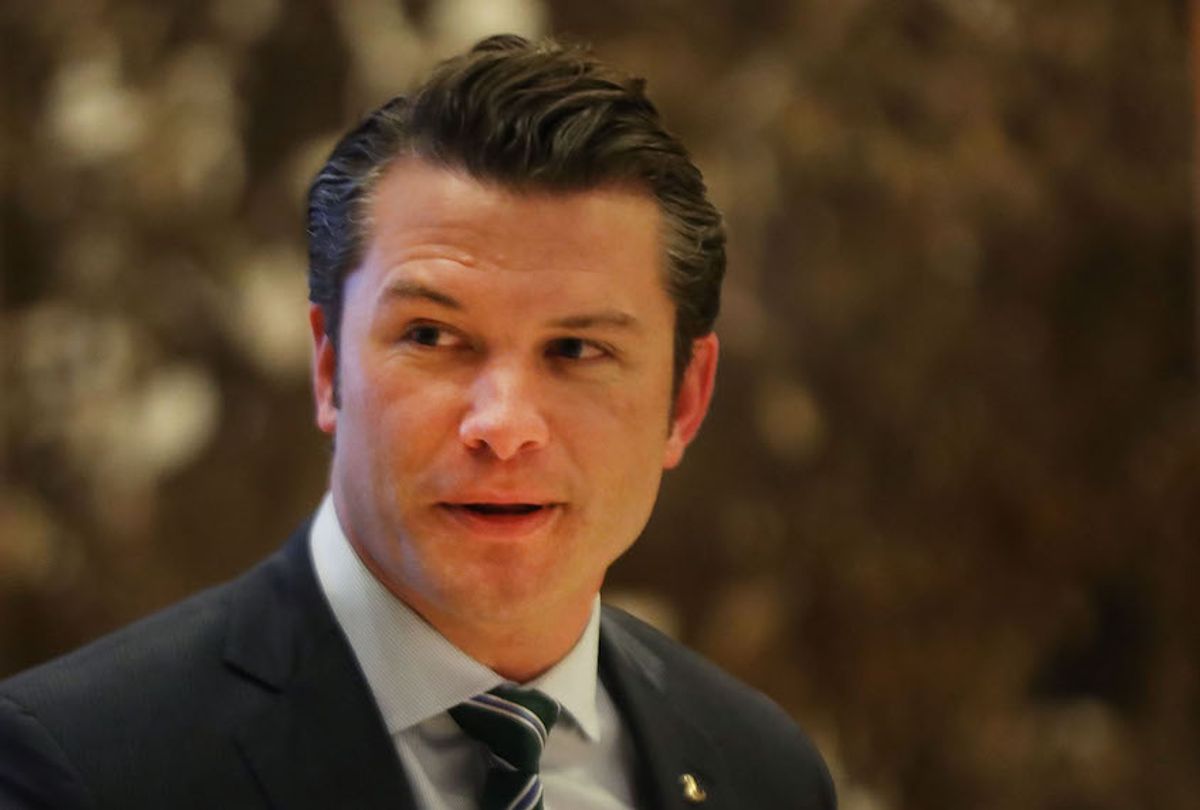 Hegseth, the weekend co-host of “Fox & Friends,” shared a report from the New York Times Saturday revealing that Trump was preparing to pardon multiple servicemen who have been convicted of accused of war crimes.

“God bless our Commander-in-Chief,” Hegseth gushed. “A true warfighter’s President. This would be amazing.”

Hegseth did not mention in his post, nor to his television audience, that he had repeatedly personally lobbied Trump for the pardons since as early as January, The Daily Beast reported.

Hegseth, an Iraq War veteran, was particularly interested in pushing for a pardon for Special Operations Chief Edward Gallagher. Galagher, a Navy SEAL platoon leader, faces a trial this month for allegedly shooting unarmed civilians while deployed in Iraq — including a young girl — and killing a captured ISIS fighter who was receiving medical treatment and then posing with his corpse. The charges are based on allegations from Gallagher's platoon members, who also alleged that he threatened anyone who took issue with his actions.

Hegseth, who was previously considered a candidate to head the Department of Veterans Affairs, repeatedly had private discussions with Trump about pardoning Gallagher and others. Hegseth told the president that the process had been “very unfair” to Gallagher, according to the report, and since at least March urged Trump to pardon others as well.

Trump praised Gallagher for his service on Twitter in March, citing "Fox & Friends," and has privately complained that the way the former SEAL was being treated was “total bullshit,” according to The Daily Beast.

Along with his private lobbying campaign, Hegseth launched a PR campaign on “Fox & Friends” to lionize Gallagher and Army Major Matt Golsteyn, CNN reported. Golsteyn faces a trial by court-martial after he admitted killing an unarmed man believed to be a bombmaker during his 2010 deployment to Afghanistan. Golsteyn’s lawyer has said that the killing was ordered by his superiors.

Hegseth has repeatedly discussed the cases on the show and has interviewed Golsteyn and Gallagher’s brother.

“These guys make tough calls in moments most people have never been a part of in their life,” Hegseth told Gallagher’s brother Sean in February, “and then folks in suits in Washington, D.C., they throw paper at them and accuse them of things.”

In April, Hegseth interviewed Don Brown, an attorney for First Lt. Clint Lorance, who was convicted of murdering two Afghan civilians that his own men said posed no threat.

“Mr. President, you have the greatest signature of all presidents who I have ever seen historically,” Brown said in the interview, appealing directly to Trump. “Clint is guilty of nothing except for being a red-blooded American patriot who put his lives on the line for his country.”

On Sunday, Hegseth complained that the media referred to the charges against Gallagher as “war crimes.”

“These are men who went into the most dangerous places on earth with a job to defend us and made tough calls on a moment’s notice,” he said. “They’re not war criminals, they’re warriors.”

The lobbying campaign appears to have worked. According to the Times, the Justice Department is rushing to complete pardon paperwork for Gallagher, Golsteyn and others so Trump can pardon them on Memorial Day. Earlier this month, Trump pardoned former Army First Lt. Michael Behenna, who was convicted of killing an Iraqi man during an interrogation in 2008.

Along with the servicemen, Trump is also expected to pardon Nicholas Slatten, a former Blackwater contractor convicted in the murder of 17 Iraqis in Baghdad in 2007.

Retired Gen. Martin Dempsey, the former chairman of the Joint Chiefs of Staff, warned that the pardons would send a message to troops and allies that the country does not “take the Law of Armed Conflict seriously.”

Retired Marine Col. David Lapan, a former public affairs officer at the Defense Department, wrote that he hopes Pentagon leaders will be able to “convince [Trump] of how dangerous & damaging these pardons would be.”

“The military is not the constituency for these pardons,” explained CNN’s Jim Sciutto. “Service-members I’ve spoken with say these convicted criminals undermine the mission and make them less safe. Strikes me it’s a straight-up political base play with damaging real-world consequences.”