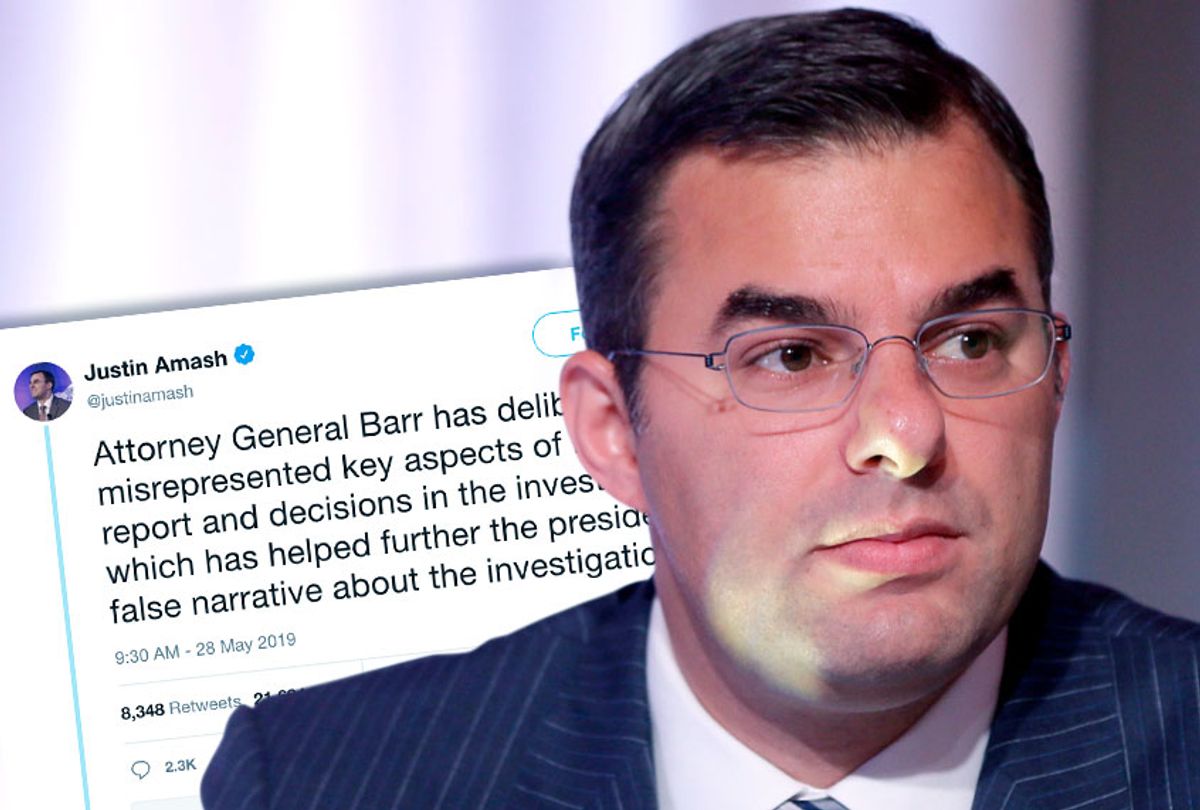 Rep. Justin Amash, who earlier this month became the first Republican member of Congress to call for President Donald Trump's impeachment, took aim at Attorney General William Barr, charging that the nation's top law enforcement officers has "used his position to sell the president's false narrative to the American people."

In a 25-post Twitter thread, the Michigan lawmaker accused Barr of having "deliberately misrepresented" the findings of special counsel Robert Mueller's investigation in a March 24 letter to Congress.

Amash tweeted that Barr's summary of Mueller's report, which has come under intense scrutiny from Democrats on Capitol Hill,  "selectively quotes and summarizes points in Mueller's report in misleading ways." He added, "the public and Congress were misled" as a result of the attorney general's four-page letter.

Amash slammed Barr for not complying with Mueller's request, detailed in a March 27 letter from the special counsel to the attorney general, to release the introduction and executive summaries of his report into Russian interference in the 2016 presidential election and alleged obstruction of justice by Trump. Mueller, in his letter to Barr, said the attorney general's four-page summary "did not fully capture the context, nature, and substance" of his investigation and its conclusions.

Mueller wrapped up his nearly two-year investigation in late March, with Barr releasing a redacted version of his 448-page report on April 18. The special counsel did not find that Trump's campaign and Moscow colluded to influence the outcome of the election, but he did not reach a conclusion on whether the president had attempted to obstruct the probe. Barr took it upon himself to conclude the evidence did not prove obstruction by the president.

Barr's handling of Mueller's report has appeared to escalate tensions between the Trump administration and congressional Democrats, prompting some to call for the attorney general's impeachment.

Democrats believe Barr inappropriately claimed  the president had not committed obstruction of justice, despite evidence laid out by Mueller in his report. Some prosecutors who worked for the special counsel also claimed the attorney general did not adequately represent their findings, telling associates the report was more damning for Trump than Barr had indicated.

Democrats in the House of Representatives are prepared to hold Barr in contempt of Congress for failing to comply with a subpoena to provide lawmakers with Mueller's full report.

Amash on Tuesday blasted Barr for testifying before lawmakers that he was not aware of reported concerns among some members of Mueller's team over his handling of the report's rollout.

"Barr has so far successfully used his position to sell the president's false narrative to the American people," Amash wrote on Twitter. "This will continue if those who have read the report do not start pushing back on his misrepresentations and share the truth."

For now, it remains to be seen if the full House votes to hold Barr in contempt. Even if House Democrats move forward with contempt proceedings, the Justice Department is unlikely to hand over Mueller's complete report. That is why some Democrats have suggested the House use its rarely invoked "inherent contempt" power, which would allow lawmakers to personally fine or even jail Barr until he complied with their requests.

More realistically, the feud between Barr and House Democrats is almost certainly heading to the courts, where a judge could decide whether to force the Justice Department to turn over the material.