Two years after four U.S. soldiers were killed in Niger, Republicans have swept the whole affair into oblivion 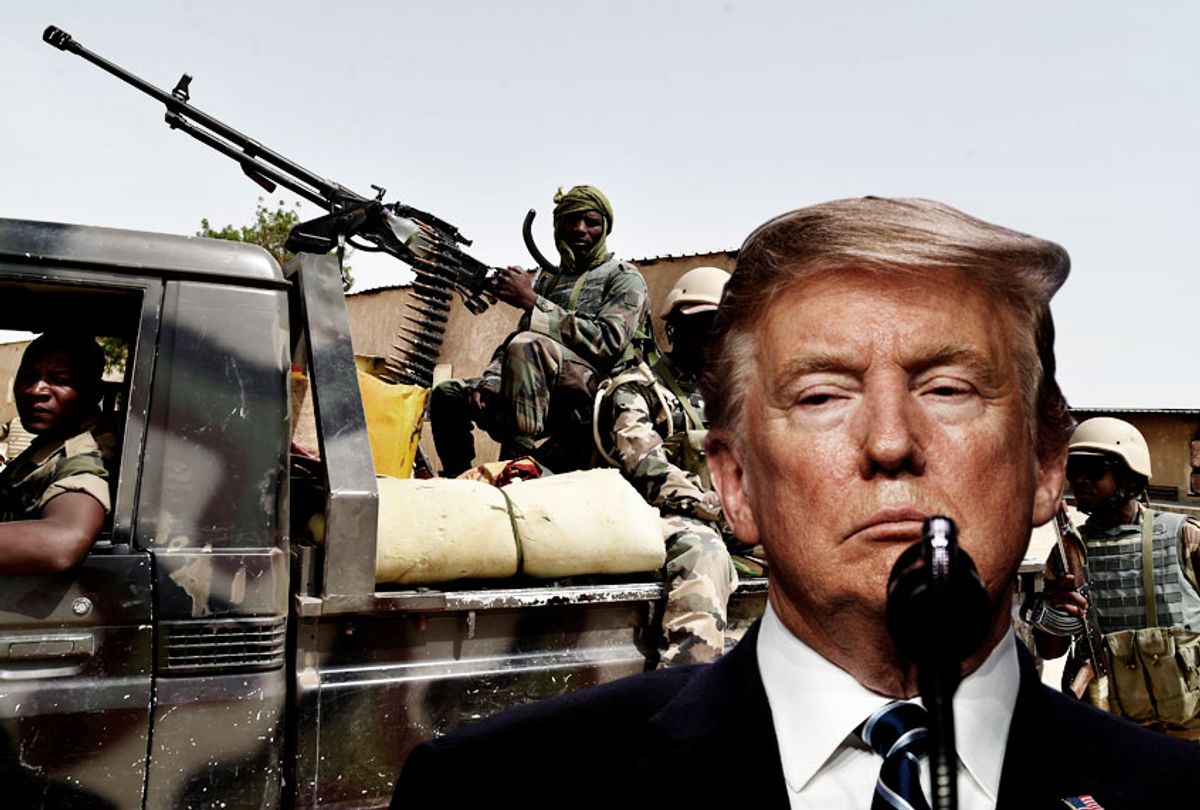 After a U.S. consulate in Benghazi was attacked and four Americans were murdered in 2012, the Republican-led House of Representatives ordered eight congressional investigations, including a special select committee whose two-year, $7 million probe lasted longer than the main Watergate investigation. But after four American soldiers were ambushed and killed in neighboring Niger five years later, House Republicans opened no such investigations. Nearly two years after the attack, the Pentagon has quietly closed its probe into the incident and declined to discipline any military commanders who ordered the troops into a danger zone with no plan and no backup.

The Niger ambush was the largest loss of American lives in combat in Africa since the 1993 “Black Hawk Down” incident in Somalia. But what looked to be a major scandal for the new Trump administration was successfully masked by what some House Democrats call a coordinated “cover-up.”

Although American military forces have never been sanctioned to an official combat mission in Niger — a landlocked West African nation about twice the size of Texas, with a population of just over 20 million people — around 800 U.S. troops have been sent to the region as part of the never-ending war on terror. On Oct. 4, 2017, four Green Berets were killed and two more injured after their group of a dozen U.S. soldiers was ambushed while conducting a joint patrol with about 40 Nigerien soldiers.

The 11 members of Team 3212 had been directed to search an empty campsite near the village of Tongo Tongo on the Niger-Mali border. The captain in charge of the patrol was told to do reconnaissance on the camp, in search of a high-value target. After a helicopter-borne team of American commandos backed out of the mission at the last minute, the commanding officer indicated that his troops didn’t have the proper equipment or intel — but the mission pressed ahead anyway. On their way back from the mission, the U.S. soldiers, along with dozens of Nigerien soldiers, were attacked by a large group of Islamic State militants that had been tracking their movements for hours. The sneak attack by a force of around 50 men was powered by vehicle-mounted weapons, belt-fed machine guns, mortars and RPGs. The U.S. troops were outmatched and unprepared.

The Pentagon’s initial 2017 review found that while the U.S. Special Operations Forces inside Niger had “the authority to conduct [counterterrorism] operations with partner Nigerien forces, the initial concept of operations (CONOPS) submitted for this mission was not approved at the proper level of command.” The investigation also found that the mission was misrepresented to higher-ups by a lower-ranking officer who failed to disclose that the team’s actual plan was to go after an Islamic State leader.

In the initial aftermath of the attack, the Pentagon only confirmed that three U.S. service members had been killed and two more wounded in the incident. The Department of Defense withheld information about a fourth soldier who had gone missing during the ambush until his remains were found by Nigerien forces roughly 48 hours after the ambush. The White House did not publicly address the deaths of the four Green Berets until 12 days later.

When the final coffin carrying one of the four soldiers arrived at Dover Air Force Base, President Trump was playing golf at one of his private clubs with Sen. Lindsey Graham, R-S.C. When pressed about his failure to call the soldiers’ grieving families, he said he would “at some point during the period of time call the parents” and falsely claimed that his predecessors had never made calls to the families of fallen soldiers. After Trump finally called Myeshia Johnson — the widow of Sgt. La David Johnson, who died in the ambush — she reported he could not remember her husband's name. Not a single prominent figure in the Republican Party has ever criticized Trump’s handling of the entire debacle.

Former Defense Secretary Jim Mattis oversaw an initial fact-finding investigation into the incident, and was reportedly upset that no senior commanders had been disciplined for their failures. The commander who oversaw Team 3212, Lt. Col. David Painter, was not punished. As the New York Times reported, Painter approved and ordered the mission.

Nearly one year later, Acting Defense Secretary Patrick Shanahan announced a change from a "top to bottom" review to one described by the Pentagon as "narrowly scoped." In March, Shanahan appointed Gen. Robert Brown, the commander of U.S. Army Pacific, to take a second look at prior investigations into the attack. As Politico first reported Tuesday night, Gen. Brown has concluded that the earlier inquiries — which only led to formal punishments for eight lower-level members of the military — were sufficient.

"Everything we're seeing right now is basically a cover-up that's occurring at the Pentagon and among general officers," Rep. Ruben Gallego, D-Ariz., a Marine infantry veteran who has been highly critical of Shanahan, said of the Pentagon’s probe into the Niger ambush.

“From the beginning, the investigation into what happened that day has been poorly handled at all levels," Gallego wrote in a statement on Wednesday. "Nearly two years later, we are still waiting for answers. The Pentagon has refused to comply with the mandate to provide Congress with a comprehensive account of what went wrong and the lessons learned, and to provide the families of those lost with any semblance of closure.” A report on the review of the Pentagon’s "advise, assist and accompany" missions, as required by the 2018 National Defense Authorization Act, has not yet been submitted to Congress.

Gallego blasted what he said were clear mistakes by military leaders that “cost these men’s lives.”

“Reports that Acting Secretary Shanahan intends to let the blame for the Niger disaster lie on junior officers and enlisted personnel is a shirking of responsibility to the memory and families of the deceased," Gallego continued. "When Soldiers, Sailors, Airmen, or Marines are sent into harm’s way, they need to trust that they have the right equipment, that the mission has been properly thought through and vetted, and that their superior officers are not going to abandon them if the going gets tough."

Gallego has urged his fellow House Democrats to vote against Shanahan's nomination as defense secretary. Shanahan, a former Boeing executive with no military experience, took over command of the Pentagon after Mattis' abrupt resignation in December but has served in an acting capacity ever since. His nomination has still not been sent by the White House to the Senate for confirmation.

Despite clear evidence of misconduct in the midst of an unexplained and likely unwinnable military operation in a distant nation few Americans have ever heard of, there has been a notable silence from the same Republicans who spent years braying about the Benghazi tragedy. The current commander in chief is fully aware of the horrendous breakdown in the Army chain of command that happened on his watch, but almost no one in the media has pressed him on it. (The Pentagon has not held an on-camera briefing by a top spokesperson in over a year.) No one outside the higher levels of military or government has any idea what may be going on in the Niger-Mali region, even after four elite U.S. Special Operations troops were charged this week in the death of a Green Beret soldier they plotted to rape in Mali.

Three years ago, whatever went wrong in Niger would have been an epic scandal. Today it's just a minor Trump administration screw-up, immediately consigned to the memory hole.