The fourth estate is crucial to our democracies, but has suffered from Silicon Valley's wrath. What is to be done? 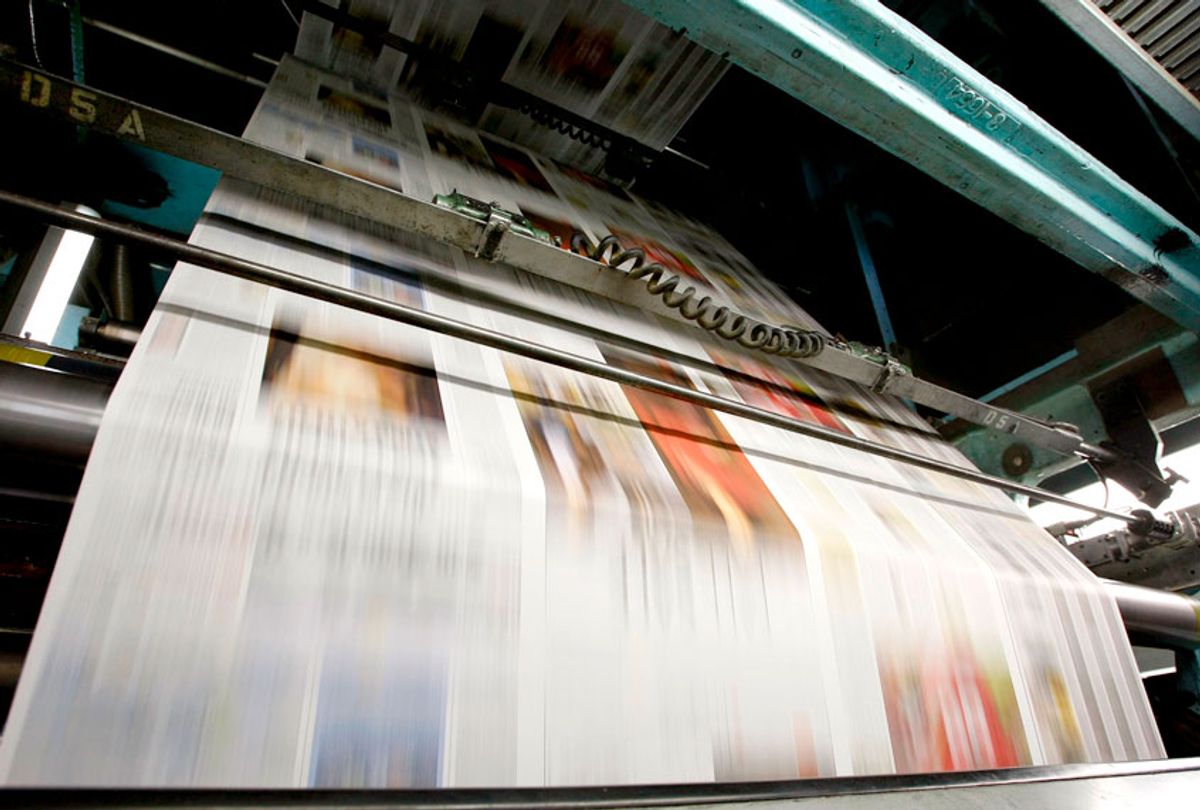 A job is not merely a means of income — for most people in the world, our jobs are tied to our survival, our self-respect and our social capital. This is partly why it is frighteningly common for workers in distressed industries to commit suicide. The New York Taxi Commissioner described a recent spate of taxi driver suicides as an "epidemic"; the misery of being a cab driver in New York stems from ridesharing apps like Uber and Lyft, which have depressed the market for taxi drivers and made a taxi medallion nearly worthless, leading to financial ruin for those who bought a medallion just before the advent of ridesharing.

So the suicide of French journalist Arnaud Dubus on Monday should raise eyebrows about the state of journalism and journalist jobs. An obituary written by his friends and published in Mediapart speaks to the financial pressure that Dubus faced; his situation is similar to what has happened to many career journalists:

[Dubus's] financial difficulties, especially in the past decade, affected him severely. Even as he contributed to major French media outlets including Liberation, Radio France Internationale and Le Temps for several decades, he could no longer make a decent living and was forced to change career last year. [...] The print media crisis, the routine use of agency content by newspapers had made his income dwindle, a little more every year, but he didn’t dare to complain. He was too humble, too isolated, too humiliated by the downgrading of his living conditions so late in life, to ever mention this to anybody outside his circle of close colleagues. [...] Arnaud was struggling with depression and followed medical treatment for the past decade. As he could no longer afford medical care, he had to interrupt his treatment.

Dubus' experience as a career journalist is typical. 100,000 journalism jobs have disappeared in the past decade, and many jobs that remain have been turned into precarious, freelance positions rather than full-time salaried jobs. Meanwhile, advertising revenue for news media fell $30 billion. That advertising revenue drop is more meaningful than it might look. Because the majority of journalism (in recent history) is funded by ad revenue, that means that there is that much less money to fund investigative journalism, to root out corruption, to follow corporate malfeasance and grift.

Not all journalism, of course, is as pure of heart as I'm making it sound. For every dollar spent on hard-nosed Seymour Hersh stories, there is a BuzzFeed listicle about kittens. Still, it is known as the fourth estate for a reason: journalism is intrinsic to the function of democracy, and provides an oversight function that none of the other three branches do.

Given the importance of journalism to the function of democracy, the recent axing of so many journos undoubtedly means politicians and corporations are getting away with more corruption. Silicon Valley may be indirectly responsible for this, as I have written before, but the larger problem may be that it never really made sense for journalism to be a for-profit industry in the first place. Leaving market forces in control of journalism is short-sighted, and will never provide a stable means of overseeing the corporate and public sectors.

What is to be done? Looking out at the vast and multifarious models for investigative journalism, there are many assorted models that buck the trend — journalistic outfits that aren't subject to the whims of the market and of investors, and who effectively exist somewhat outside of it. These models presage potential futures for journalism and a means of saving the fourth estate by diversifying it.

Model one: the nonprofit model

There are in fact many nonprofit news sites in existence already: ProPublica and Mother Jones are two of the largest. The benefits of a nonprofit model are myriad: being less tied to the whims of the ad market, nonprofits have more stability quarter-to-quarter and less of a need to focus strictly on profit. Mother Jones has an interesting breakdown of how money was distributed for a New York Times Magazine story that cost $400,000 to report — and which was helped to print by a grant from the nonprofit Kaiser Foundation.

The problem with nonprofit journalism is that the downsides are myriad, too: nonprofits are beholden to their donors, and of course the kinds of people that are important to them tend to be wealthier — those who can make a single large donation, in many cases. Hence, just as Karl Marx predicted when he said "the ideas of the ruling class are in every epoch the ruling ideas," it is not uncommon for nonprofit media sites' views to reflect those of their ruling-class benefactors. There is a reason that so many nonprofit right-wing news sites like, well, Reason, exist: wealthy, privileged people tend to believe in the myth of their self-made excellence, and want to read more news that reflect that flawed worldview, and hence donate to those sites that reinforce their worldview.

Despite that, there is a strong argument to be made that a news landscape dominated by non-profit rather than for-profit journalism would be a step up from what we have now in terms of creating stable jobs for career journalists.

In theory, most news media sites and papers possess editorial independence, meaning they can write and report on whatever they wish without fear of repercussion from an owner or investor whose profit margins are threatened by their reporting. In practice, this is rarely the case. Last year, two Newsweek journalists were fired for reporting on their own company's malfeasance. Similarly, when right-wing billionaire Sheldon Adelson bought the Las Vegas Review Journal, "executives at the paper reviewed and edited articles about the sale to remove details and quotes that could put the new owners in an unflattering light," according to a New York Times report.

If seasoned journalists had tenure in the same way that academics do, these kinds of situations could perhaps have been avoided. Similarly, the notion of academic tenure came about because university professors were getting fired for expressing left-populist views. An excellent piece in Democracy Journal explicates this history:

The argument for tenure rests on a largely forgotten history of academic injustice. There are some major cases. In 1895, Edward Bemis, an economist, “lost his job at the University of Chicago…for advocating the public ownership of municipal utilities and railroads.” Just a few years later, the “imperious widow of Leland Stanford” demanded that E.A. Ross, an economist and sociologist, be fired from Stanford since he believed in “the public ownership of railroads” and criticized “the importation of Chinese workers.” Ross played into the “vilest elements of socialism,” Stanford’s widow complained, and thus the president of the university had to oust him, which he did. During World War I, when the country saw a pandemic of civil liberties violations, Columbia University President Nicholas Murray Butler and the board of trustees fired two professors who voiced doubts about America’s entry into that controversial war.

Model three: Journalism in the university

We think of the university as a place where knowledge is produced and credentials are earned; yet American universities do far more than that. My alma mater, the University of California at Santa Cruz, is a degree-granting institution with extensive hiking trails, a public gym that anyone can join, an arboretum, a farm that sells discounted produce at an on-campus farmer's market, and even rentable facilities that host weddings. Nearby Stanford University has a particle accelerator and rents some of its land to a luxury shopping mall. Clearly, the university's function goes beyond merely granting degrees — universities, particularly public ones, are places where the commons live.

There is a crucial relationship between democracy and education; specifically, if we presume that in a democracy the voters decide best how society functions, it behooves those same voters to be well-educated enough to understand the social, political and cultural issues that they vote on. Like education, journalism has an intrinsic relationship with democracy, as I mentioned earlier.

Could journalists live within universities? It is not an outlandish idea; in fact, there is precedence for this model. There are already magazines and news sites funded in part or entirely by universities: Nieman Journalism Lab, which reports on journalism, is a project of the Nieman Foundation but lives within Harvard University, the result of a bequest. Similarly, the Columbia Journalism Review is published by the Graduate School of Journalism at Columbia University. Moreover, many J-schools have their own independent reporting magazines and news sites already, albeit staffed by graduate students.

There may not be many models of worker-owned news sites (MeansTV being a notable exception), but there are many examples of worker-owned companies, such that it is a well-established idea with a long history. And there are many reasons that a worker-owned company is superior to one owned by investors or publicly-traded — one being that they distribute profits back to employees in a manner that is far more just, so much so that they have been proposed as a policy proposal for reducing the wealth gap in the US.

Salon contributor Richard D. Wolff, an economist who is an expert in the benefits of worker-owned enterprises, explains why and how this business model is so superior:

In most capitalist enterprises, and certainly most major corporations that dominate capitalist economies, the organization of work is highly stratified. At the top are the major shareholders, typically 10 to 20 people who own major blocks of shares in the company. Because of that they have the voting power of all those shares and that gives them the authority under the law to select the board of directors… between 15 and 20 people. Together, the major shareholders and the board, 30 to 40 people, make all of the decisive decisions in a corporation: What the company will produce; how; where; and finally what to do with the profit the enterprise generates. The vast majority of workers in a capitalist enterprise are required to live with the results of all of the decisions from which they are excluded… The vast mass of workers must accept, have no legal recourse to reject, most of the decisions made by a tiny minority.

A cooperative enterprise is the key, decisive alternative to a traditional capitalist enterprise… All the workers, whatever they do inside an enterprise, have to be able to participate in collectively arriving at the decisions what, how, where to produce, and what to do with the profits in a democratic way… One person, one vote in deciding how these things are done…

One can see, then, how a worker-owned journalist outfit would have benefits over a corporate-owned model. If ad revenue suddenly dips (a common occurrence nowadays), instead of laying off a few journalists, employees could vote to move to 38 hour instead of 40-hour weeks to preserve everyone's jobs. Likewise, not being tied to the demands of ever-greedy investors would mean journalists would have more freedom to pursue important stories, untethered from capitalists' strict profit motives.

Examples abound of partially or fully state-owned media that has editorial independence. The British Broadcasting Company (BBC) is funded by a public license fee, and is journalistically independent from the state.

These five examples of non-privatized media models attest to the fact that there may not be one so-called solution to the problem of creating robust journalistic institutions in democracies. Perhaps a combination of several may hint at a way forward; in any case, as Silicon Valley's middlemen continue to slough off ad dollars from news sites, the situation for journalism and journalists may get even more dire. It's time to start thinking about alternatives.