Mitch McConnell claps back at Jon Stewart: "I don't know why he's all bent out of shape"

"The back and forth about this issue is solid evidence that something needs to get done," Lee London tells Salon 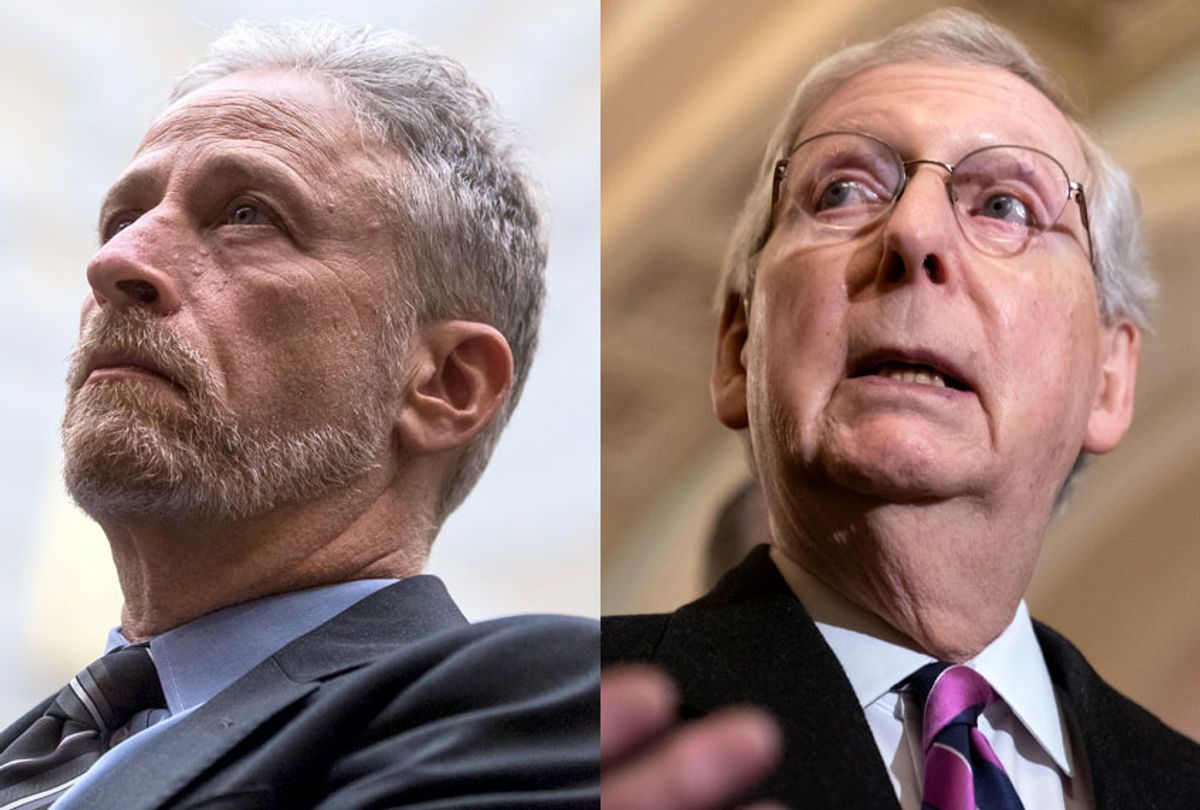 Senate Minority Leader Mitch McConnell clapped back at Jon Stewart after the comedian accused him of using the 9/11 Victim Compensation Fund as a "political football" on "Fox News Sunday."

"Well, many things have in Congress have at the last minute," McConnell said Monday in response to a question from the co-hosts of "Fox & Friends" about why action on the 9/11 Victim Compensation Fund often seems to wait until the last minute. "We have never failed to address this issue, and we will address it again. I don't know why he's all bent out of shape, but we will take care of the 9/11 Victims Compensation Fund."

McConnell then took a swipe at Stewart after he was asked about why so many chairs at the committee hearing regarding the fund were empty.

"Well, that frequently happens, because members have a lot of things going on at the same time," McConnell said. "And it sounds to me like he's looking for some way to take offense. There's no way that we won't address this problem appropriately. We have in the past, and we will again in the future."

"There have been a lot of delays," London told Salon. "This is an issue that should just be solved immediately, in the sense that Jon Stewart is putting out there all of the issues that are going on with the first responders. "

"Because it's frustrating to justify the need for something that — if you look at the World Trade Center health program, the cancer rates that are happening under first responders and survivors, these are cancers that are on steroids that are so aggressive," he continued. "And when we're trying to push for the fund to permanently extended and refunded, the back and forth about this issue is solid evidence that something needs to get done."

Senate Minority Leader Chuck Schumer also posted a tweet explaining to McConnell why Stewart was outraged over the issue.

"I’ll tell you why. Because 9/11 victims are getting sicker, and the last time this bill came up you delayed," Schumer wrote on Twitter.

He added in note to McConnell himself: "Ease everyone’s worthy concerns right now by committing to put the bill on the floor for a stand-alone vote as soon as the House passes it."

During his interview on "Fox News Sunday," Stewart explained that he felt McConnell had used the fund as a "political football" in order to achieve other Republican policy goals.

"Mitch McConnell has been the white whale of this since 2010," Stewart told Wallace. "In 2010, and this brings up something, because I think it's the cynicism that's displayed by Washington that also causes this situation to be so emotional. They asked Mitch McConnell about the testimony after it was done, and he said, 'Oh, gosh'— I think he used the word 'gosh' — 'gosh, we haven't looked at that in a while, but we will look at it, and I'm sure we'll deal with it as compassionately as we have in the past.'"

He added, "But I want to make it clear that this has never been dealt with compassionately by Sen. McConnell. He has always held out until the very last minute, and only then under intense lobbying and public shaming has he even deigned to move on it."