Fox News host Sean Hannity warns Iran: "You're going to get the living crap bombed out of you" 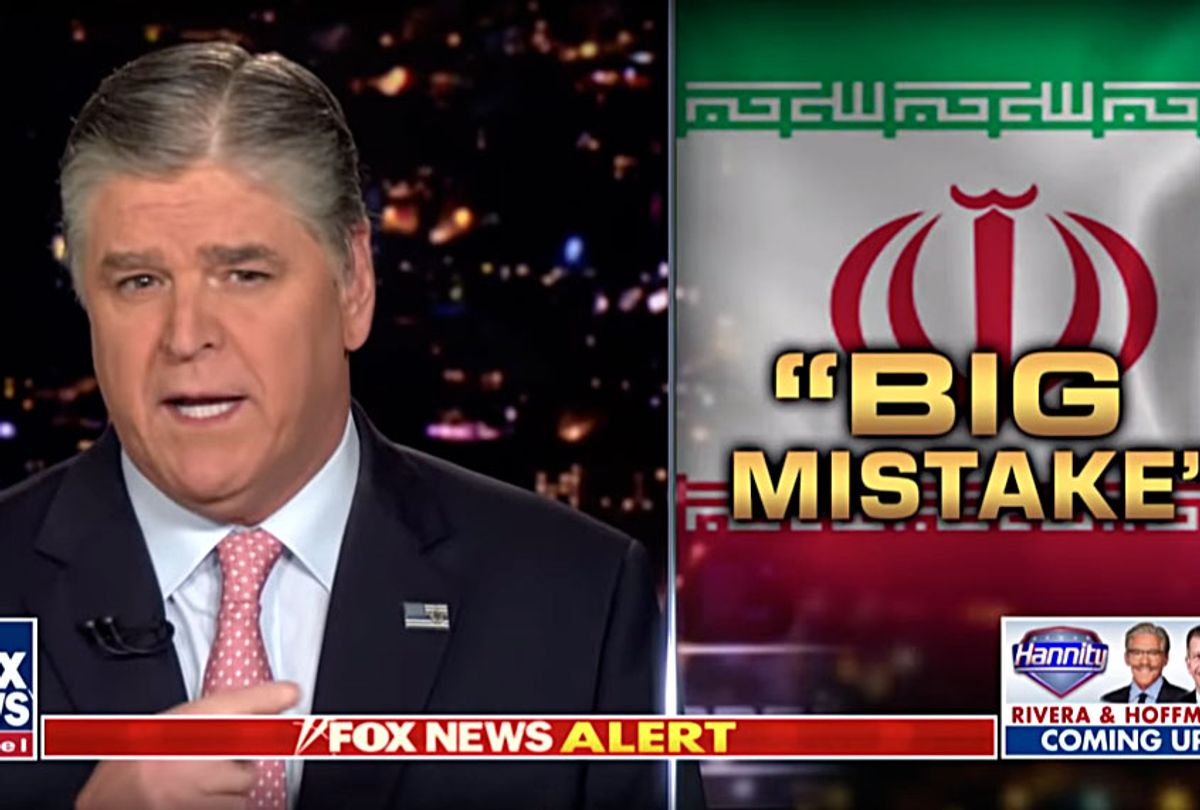 Fox News host Sean Hannity opened his show Thursday with a pledge that President Donald Trump would soon declare war on Iran unless the Gulf country takes advantage of a "small window" for peace.

Hannity said that if the "mullahs are smart enough," then they will take a rapidly fading option to de-escalate the situation with the U.S. after Iran shot down an unmanned U.S. surveillance drone Thursday. If not, Hannity said, Trump will have "no choice" but to "bomb the hell out of" the country.

Hannity, who acts as an informal adviser to the president, noted that Trump said "clearly during the campaign" that he "does not want war" and is "not interested" in "another, you know, years and years long international entanglement."

"We have the greatest military, thank God, on the face of the earth," he continued. "We have the most advanced weapons systems, and a strong message needs to be sent that a huge price will be paid if you take on the United States of America. Simple peace through strength — it works."

The Fox News host pointed out that "Iran's armed forces cannot match the might of our military."

Later on in the show,  the staunch Trump booster declared,"If you shoot an American missile or a drone out of the air and you attack tankers in the Strait of Hormuz, you’re going to get the living crap bombed out of you."

Hannity's warning to Iran came just an hour after another Fox News host, Tucker Carlson, praised the president for avoiding calls for war with Iran. The Daily Beast reported Wednesday that Carlson has been informally advising the president against taking military action against Iran. The Fox News host reportedly urged Trump to resist voices in favor of war from within his administration and publicly criticized the president's hawkish national security adviser, John Bolton, who has previously sought military options for striking Iran.

Trump's affinity for the conservative cable network has been well-documented. He frequently promotes Fox News programming on his personal Twitter account, praises the network's hosts during campaign rallies and has appeared to make a point of filling his administration with former Fox News staffers — from on air personalities to executives. In describing the relationship between Fox News and the White House, Salon's Heather Digby Parton wrote, "Fox has become Trump's de facto kitchen cabinet and unofficial communications office, creating a tight feedback loop between the far right and the White House."

Hannity's calls for military action against Iran came after the Middle Eastern nation claimed to have shot down a U.S. surveillance drone flying over the Strait of Hormuz.

While the U.S. and Iran gave conflicting accounts on where the drone had been shot down, the two countries both agreed that Iran had shot down the drone. Tehran maintained the aircraft had entered its airspace, while the U.S. Central Command denied that assertion and said the aircraft fell in international waters.

Thursday's strike came amid escalating tensions between the two adversaries. American officials accused Iran last week for conducting attacks against two oil tankers in the the same area. Trump himself blamed Iran for the tanker attacks, telling Fox News, "It was them that did it."