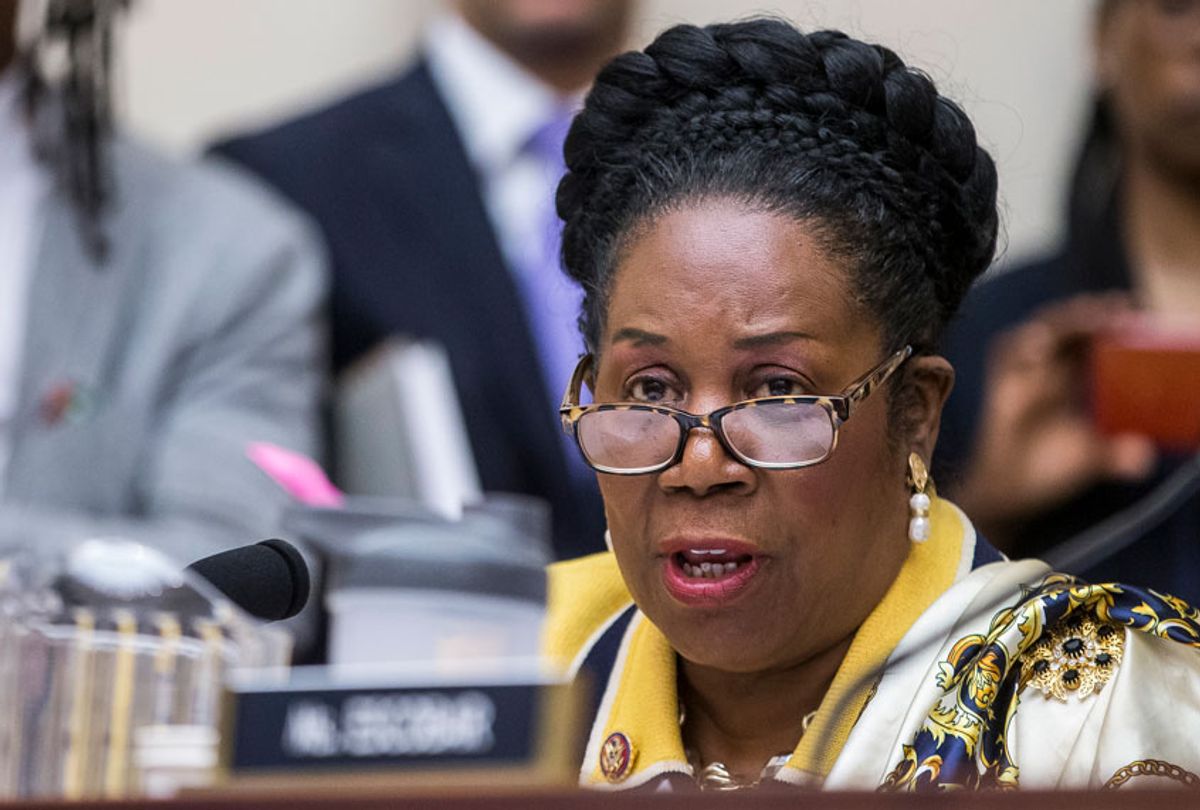 Rep. Sheila Jackson Lee (D-TX) speaks during a hearing on slavery reparations held by the House Judiciary Subcommittee on the Constitution, Civil Rights and Civil Liberties on June 19, 2019 in Washington, DC. (Getty/Zach Gibson)
--

What’s most potentially transformative about Rep. Sheila Jackson Lee’s proposed bill H.R. 40 to establish a commission to study and develop reparation proposals for African-Americans is the no-holds-barred inquiry it promises.

While the corporate news media zeros in on the clickbate of who might get paid what — and the red-meat racial antagonism it is already engendering — the real power in this essential exercise is the long-overdue accounting.

The bill empowers the Commission “to request the attendance for testimony of such witnesses and the production of such books, records, correspondence, memoranda, papers and documents that the Commission considers appropriate” and permits the panel to turn to the “appropriate U.S. District Court to require, by subpoena” compliance with its requests.

Such a comprehensive examination would help bring alive the lost narratives of misery and oppression that mark not just the crime against humanity of slavery itself, but also its enduring manifestations. To this very day, the disparate application of the law that has over one million African-Americans behind bars and the use of foreclosure by banks like Wells Fargo in communities of color are all economic links to that chain that starts with slavery.

There’s no doubt about the liberating power that can be unleashed by this kind of introspection if it is followed by resolve to take action.  Consider the recent vote by the students of Georgetown University to impose a $27.20 fee increase on themselves to compensate the descendants of the 272 slaves sold in the 1830s by Georgetown’s founders the Maryland Province of Jesuits, who needed to raise cash quickly to stave off the debt collectors.

Rep. Lee’s resolution mandates the Commission look at the “fundamental injustice, cruelty, brutality, inhumanity of slavery in the United States and the 13 colonies” from 1789 until 1865, when it was formally abolished.

In the case of my home state of New Jersey, such a review would throw a spotlight on just how much the state embraced the institution and indeed extended it to encompass Native Americans.

In 1797 New Jersey’s Supreme Court, rejected a habeas corpus petition, brought on behalf of an enslaved Native American, known to the court only as “Rose,” arguing that her captivity was part of a kind of natural order beyond questioning.

“They [the Native Americans] have been so long recognized as slaves in our law," the Court wrote, "that it would be as great a violation of the rights of property to establish a contrary doctrine at the present day, as it would be in the case of Africans; and as useless to investigate the manner in which they originally lost their freedom.”

Indeed, the foundation of this mentality that turned human beings into property was established with the advent of the Doctrine of Christian Discovery promulgated by Pope Nicholas V in 1452 that gave Europe’s monarchs the franchise to conquer and subjugate the non-Christians inhabiting the planet, so as to add to the dominion of the church. In 1823, the United States Supreme Court ruled in Johnson v. M'Intosh that this grim franchise granted European sovereigns had been transferred to the United States: "The United States, then, have unequivocally acceded to that great and broad rule by which its civilized inhabitants now hold this country. They hold and assert in themselves, the title by which it was acquired. They maintain, as all others have maintained, that discovery gave an exclusive right to extinguish the Indian title of occupancy, either by purchase or conquest; and gave also a right to such a degree of sovereignty, as the circumstances of the people would allow them to exercise."

It is no accident that this movement for an historical investigation into the enduring legacy of America’s original sin of enslaving four million Africans from 1619 until 1865 surface now. Such a potent inquiry is an appropriate litmus test for any Democrat who wants to be the 2020 standard-bearer to challenge the unrepentant white supremacist in the White House.

Whether it was the Trump real estate company’s discrimination against people of color, his efforts to undermine the legitimacy of America’s first African-American by questioning his birth certificate, or his campaign rally exhortations for the crowd “to look at my African-American over here;” he’s actually built his brand on white supremacy.

Not since President Woodrow Wilson held a White House screening of “The Birth of a Nation,” originally entitled the “The Clansman,” have we had a President who provided more political cover for white supremacy as he did for the Nazis that marched in Charlottesville.

In 2016 Trump’s particular mélange of anti-immigrant hatred and racial condescension helped to boost white turn-out in the same election cycle that saw a dramatic drop in African-American participation.

And while there has been much focus on Trump’s success on flipping rust belt 200 counties that voted for Obama/Biden twice, he’s sitting in the Oval Office because hundreds of thousands of African-Americans chose not to vote, which had real electoral consequence in a race Trump won by just 70,000 votes.

The time for this question to be explored is now because the nation’s wealth concentration and income disparity continue to grow at an alarming rate. African-Americans, whose average household wealth is less than 1/16 of the wealth of white families, were hit hardest by the post-Recession loss of their homes because President Obama picked Wall Street over Main Street.

By the time we are finished with the long overdue proctological examination of the source of the wealth of the nation’s one percent they will be begging to just be simply be taxed at the 90 plus rate that the wealthy lived with under President Eisenhower.

One of the most oppressive aspects of the current domination of all segments of our lives by big capital centered in places like Wall Street is the moral legitimacy and inference of intellectual superiority we confer on the holders of great wealth.

As it turns out, the path to redeeming America’s future is by unearthing the darkest passages of its past.