Alexandria Ocasio-Cortez on Joe Biden: "He’s not a pragmatic choice"

However, Ocasio-Cortez refuses to endorse an alternative to Biden: "We haven’t even had a debate yet" 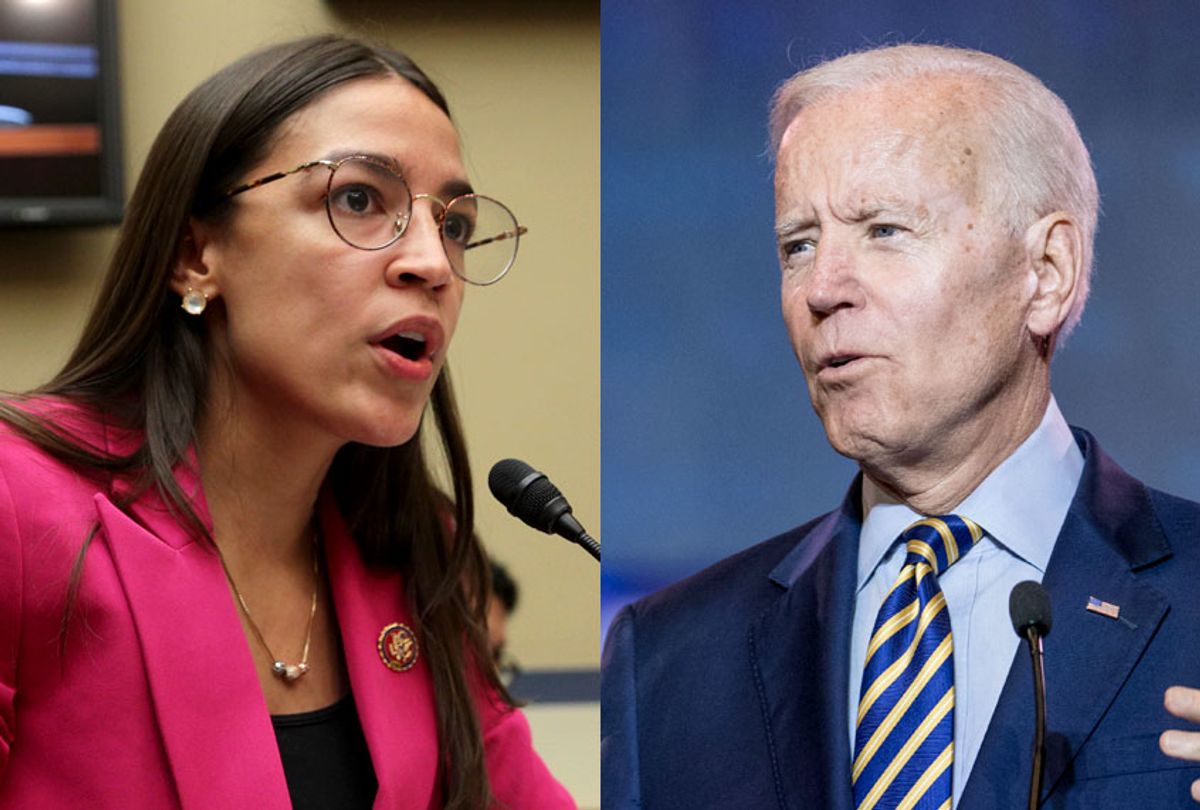 Rep. Alexandria Ocasio-Cortez, D-N.Y., said she does not think former Vice President Joe Biden would be "a pragmatic choice" for Democrats in the 2020 presidential election.

"I think that he’s not a pragmatic choice," Ocasio-Cortez told "Vogue" when discussing Biden's candidacy and, specifically, his recent controversial remarks about working alongside segregationists in the Senate.

"That’s my frustration with politics today — that they’re willing to give up every single person in America just for that dude in a diner . . . Just so that you can get this very specific slice of Trump voters?" she continued.

"If you pick the perfect candidate like Joe Biden to win that guy in the diner, the cost will make you lose, because you will depress turnout, as well," she added. "And that’s exactly what happened to 2016. We picked the logically fitting candidate, but that candidate did not inspire the turnout that we needed."

However, Ocasio-Cortez refused to endorse an alternative to Biden, telling "Vogue" that "we haven’t even had a debate yet."

The New York legislator made similar comments in April when speaking to the Yahoo News podcast "Skullduggery." During that interview, Ocasio-Cortez said she would "support whoever the Democratic nominee is," but when it comes to a personal preference, "I truly do not have one yet. I truly do not."

However, she did offer a flattering assessment of the two candidates widely regarded to be the most liberal in the field — Sens. Bernie Sanders of Vermont and Elizabeth Warren of Massachusetts.

Ocasio-Cortez was also skeptical of Biden in that interview, arguing that his candidacy owes its viability more to nostalgia for the previous Democratic presidency than his own ability to be a strong candidate on his own.

"That does not particularly animate me right now," Ocasio-Cortez said when asked about Biden's candidacy. She said that she would have "a lot of issues" with Biden running for president and added that "I can understand why people would be excited by that — this idea that we can go back to the good old days with Obama, with Obama’s vice president. There’s an emotional element to that, but I don’t want to go back. I want to go forward."

Biden is not the only Democratic presidential candidate who Ocasio-Cortez has criticized for being too moderate. Earlier this month, she also criticized Rep. John Delaney, D-Md., for describing Medicare for All as "not good policy."

In her initial tweet responding to Delaney, Ocasio-Cortez wrote that "since there’s so many people running for President (& not enough for Senate), instead of obsessing over who‘s a 'frontrunner,' maybe we can start w some general eliminations. This awful, untrue line got boo’ed for a full minute. John Delaney, thank you but please sashay away."

She followed up by tweeting, "✓Medicare for All IS sound policy - one may disagree w/ it, but plenty of other countries have single payer + better outcomes than the US ✓ M4A IS good politics - it polls VERY well in swing states ✓ 'Third-Way' (aka lobbyist-backed Dems) WILL lose the presidency to Trump."