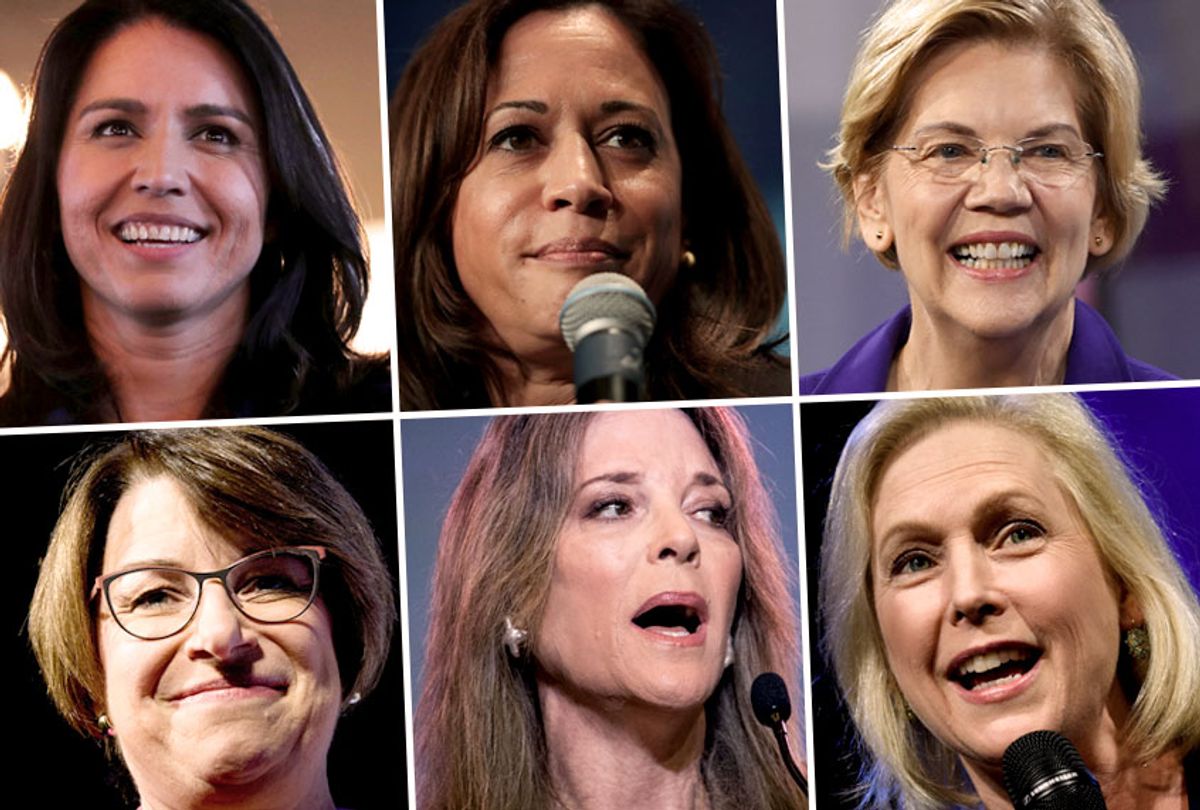 In poll after poll of the 2020 presidential race, Democratic voters have prioritized "electability," or the ability of the party’s nominee to ultimately deny President Donald Trump a second term in the White House.

But with the most diverse Democratic presidential field in modern U.S. history — followed by a midterm election in which Democrats elected a Somali refugee to a pair of Native American women to the 116th Congress — sex, gender and race appear to matter less to voters than "electability," even though a pair of white male candidates, former Vice President Joe Biden and Sen. Bernie Sanders of Vermont, consistently hold a commanding lead over the 2020 race.

As voters prepare to tune in to the first televised debates of the 2020 Democratic nominating contest, nearly every presidential candidate is getting ready to argue to the public that they are most "electable," although there is no clear definition of electability — at least in 2020.

Is the most electable Democrat a white male Christian? Is it a woman? Is it a moderate who can peel off voters in the Midwest who were key to the Democratic Party's gains in the 2018 midterms? Or is it a person of color who can boost turnout among African-Americans and Latinos? Or could it be a populist progressive who drifted from the Democratic Party but wants to help Democrats win back the Rust Belt states that catapulted Trump to the White House?

Those questions might yield dozens of different answers, and there is no clear answer on what kind of Democrat fits the bill. However, according to the aforementioned polls and the results of a new report on the 2018 midterm elections, sex and gender matter less to voters in the 2020 race, whereas some researchers have found evidence that sexism may have hurt Hillary Clinton at the ballot box.

The Reflective Democracy Campaign, which maintains that is the only comprehensive database of candidates and elected officials by race and gender, indicates in a new report that women of all races and men of color were elected at the local, state and federal level at the same rate as white men.

The research suggests the overrepresentation of white men in U.S. politics is less about discrimination than barriers to entry — such as political parties, the power of incumbency and the economic realities of running for and holding office — that makes women and people of color less likely than white men to consider seeking public office in the first place.

"White male over-representation is not about their superior pull with voters," the report notes. "When voters have the opportunity to vote for women of all races and men of color, they chose them at the same rates as white men."

"When voters speak, they leave no doubt that white male 'electability' is myth — not a face," it added.

The group reviewed more than 33,000 candidates in races for federal, state and country offices in 2018, as well as 44,900 current elected officials to determine what makes a candidate electable in the 21st century.

The report finds that in the race for Congress in 2018, the number of female candidates increased by 40 percent from 2012 to 2018, including a 105 percent increase in candidates who were women of color. From 2015 to 2019, congressional seats held by women increased from 19 percent to 24 percent.

At the state level, there was an increase in female representation in 47 of the 50 states — including in Nevada, which made history as the nation's first majority-female legislature.

Trump's election in 2016 may have accelerated the pace of demographic change, with women's share of elected seats in local, state and federal office growing at rate of 3 percent from 2015 to 2017, and then more than doubling to a rate of 7 percent from 2017 to 2019. In Congress, the rate of growth exploded from 2 percent to 21 percent.

Although the 2018 midterms saw historic gains in representation for women and people of color, political representation in the U.S. remains far from equal. While women currently account for more than half of the nation's population, they hold less than a quarter of seats in the Congress. People of color, who make up 39 percent of the nation's population, also remain underrepresented, holding only 10 percent of all elected offices.

Sen. Kamala Harris, D-Calif., suggested that when it comes to taking on Trump, the definition of electability changes.

"There has been a conversation by the pundits about electability and who can speak to the Midwest? But when they say that, they usually put the Midwest in a simplistic box," Harris said, referring to white working-class voters, in a speech to the NAACP. "It's shortsighted. It's wrong."

Cullen Tiernan, a spokesperson for Rep. Tulsi Gabbard's 2020 campaign, told Salon, "We do not need to see a study in order to know that women and people of color — including women of color like presidential candidate Tulsi Gabbard — are just as electable as anyone else. Our campaign has great faith in the American people that — in 2020 — they will elect the best person for the job regardless of gender, race or sexual identity."

"The more women run and win, the better for the country," Patricia Ewing, communications director for Marianne Williamson's presidential campaign, told Salon. "Americans are open to the best candidate to set us a positive path for the future, regardless of gender."

Representatives for Sens. Elizabeth Warren, D-Mass., and Amy Klobuchar, D-Minn., did not respond to requests for comment from Salon.

The analysis by the Reflective Democracy Campaign is based on congressional elections, in which there is far more available data than presidential races. The group used information from the Ballot Information Project and Governance Project databases maintained by the Center for Technology and Civic Life (CTCL). Race and gender data for candidates and elected officials has been aggregated over the past five years by CTCL using existing research and public information, email and phone surveys, voter file matching and race/gender modeling.