Gabbard's a peculiar character who will never be president. But she might have just done her party a huge favor 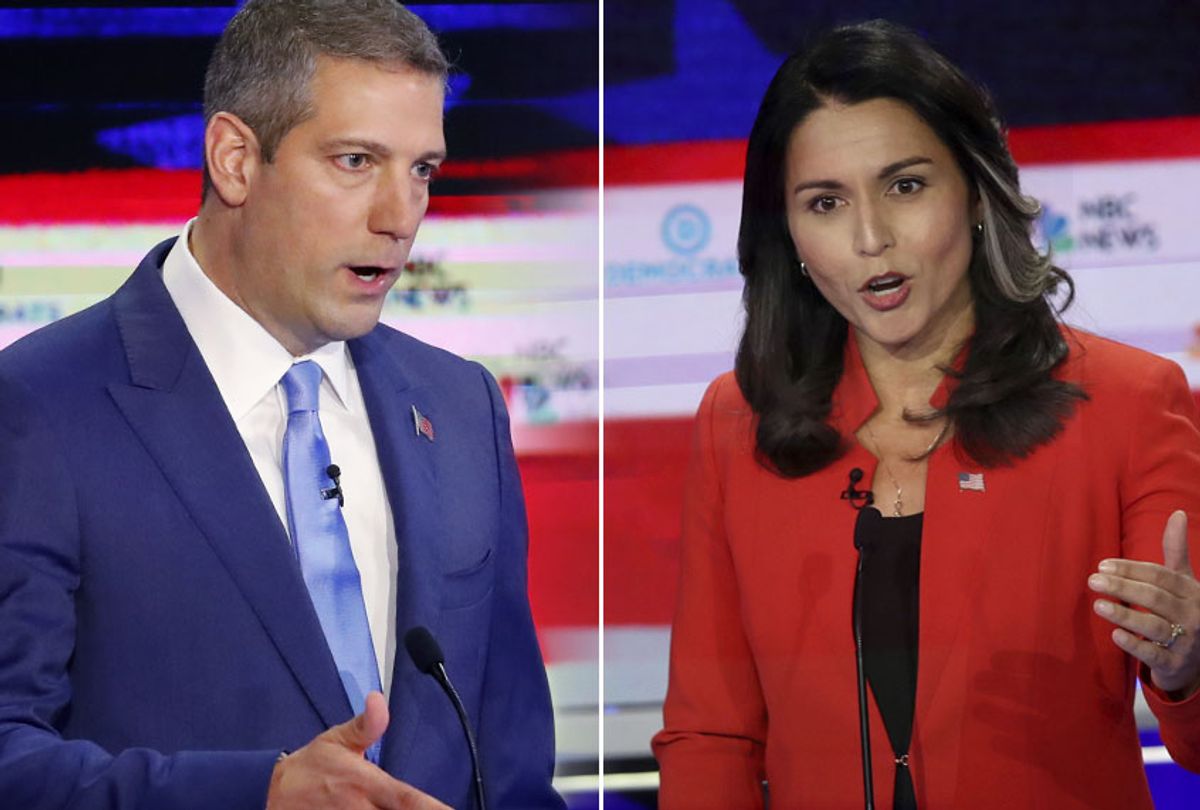 Tulsi Gabbard is not going to be the Democratic nominee, let alone the next president. But the congresswoman from Hawaii, who is an outlier among the two dozen Democrats running for president and something of a pariah in her own party, made a case for herself in Miami on Wednesday night. She was there to talk about American imperialism and the doctrine of endless war, a topic nearly everyone else in both political parties is eager to avoid.

Sometimes marginal, no-hope candidates are just dead weight. (We will see Marianne Williamson and Eric Swalwell in action on Thursday night.) But sometimes they serve as prophets without honor, pushing neglected issues to the forefront or forcing a political party to confront its blind spots and internal contradictions. Consider the roles played by the Rev. Jesse Jackson and Rep. Dennis Kucinich in Democratic campaigns of yesteryear — or, in a darker register, the roles played by evangelist Pat Robertson and anti-immigration zealot Tom Tancredo in reshaping the Republican Party’s agenda.

Like many of those people, Gabbard is perceived as something of a weirdo, especially by other Democrats. That’s not entirely wrong — but it’s also a defensive reaction. She projects a disconcerting vibe of self-possession, or even zealotry, that makes her seem to be living on her own planet. Social media wags suggested during Wednesday night’s debate that Gabbard resembles one of the robotic hosts on “Westworld,” whose programming is starting to glitch out. That’s cruel and unfair, but it captures something.

I’ve heard Gabbard described as a cult leader, a grifter, an anti-feminist or misogynist woman, an apologist for war criminals and a hopelessly naive nutjob. She has certainly had a peculiar life history and a peculiar political career: She used to be a right-wing eccentric who opposed abortion and LGBTQ rights, and is now something of a left-wing eccentric. She represents a state in the middle of the Pacific Ocean that remains largely disconnected from political discourse on the U.S. mainland. She is the first Samoan-American ever elected to Congress, and also the first Hindu. (She has no South Asian ancestry: Her mother, a white woman from Indiana, is a Hindu convert.)

But those facts and those characterizations need to be balanced against the fact that Gabbard is also a major in the Army National Guard who served two tours of duty in the Middle East, the first of those in Iraq during 2004 and 2005, when the U.S. occupation was rapidly falling apart.

In other words, no matter what the other candidates on the debate stage thought of Gabbard, they all got out of her way while she tore apart Rep. Tim Ryan of Ohio, who was making some incoherent chickenhawk case for staying in Afghanistan till doomsday — and appeared not to understand the difference between al-Qaida and the Taliban:

Ryan attempted to strike back after the debate, attacking Gabbard for her 2017 meeting with Syrian President Bashar al-Assad, but the damage was done. Ryan had no chance before that moment, and has less than none now. (As far as the Assad meeting goes, no doubt it was a political error — but Gabbard’s point, which was that any peace agreement in Syria required engaging with his regime, has been borne out as 100% correct.)

There was a huge spike in search traffic for Gabbard’s name after the debate, probably because most viewers had no idea who she was. She also won an “instant poll” conducted late on Wednesday night by the Drudge Report, a data point that is meaningless in terms of the Democratic race, but still tells us something.

That something might be that Gabbard is a creature of the intersectional zone where the anti-imperialist far left meets the isolationist far right, along the lines of Glenn Greenwald's appearances on Tucker Carlson's show. But it’s actually bigger than that: It’s the fact that Americans across the ideological spectrum do not want “regime-change wars,” to use Gabbard’s phrase, and are at least dimly uncomfortable with our nation’s global reputation as a blundering, untrustworthy imperial superpower.

Donald Trump exploited those facts in 2016 to make Hillary Clinton look (with some justification) like an old-line war hawk. His own understanding of foreign policy was and remains an incoherent blend of contradictory fantasy worlds — on one hand, America First isolationism; on the other, unquestioned global dominance — but he had enough sense of the public mood not to give Mike Pompeo and John Bolton the war they wanted with Iran.

So in a sense Gabbard just did the Democratic Party a huge favor by exposing one of its worst internal failings. No one besides her in the 2020 field is likely to talk about war-and-peace issues unless they have to — and as Tim Ryan made clear, whenever they do it’s likely to go south fast. But if the Aloha State oddball’s moment of internet fame compels the party to confront the fact that the old foreign-policy orthodoxy of soft-focus imperialism and ever-widening secret war is massively unpopular, morally bankrupt and financially ruinous — and that there’s no way to create a more just world without changing that — she may have done more for human history than anyone else on that stage.