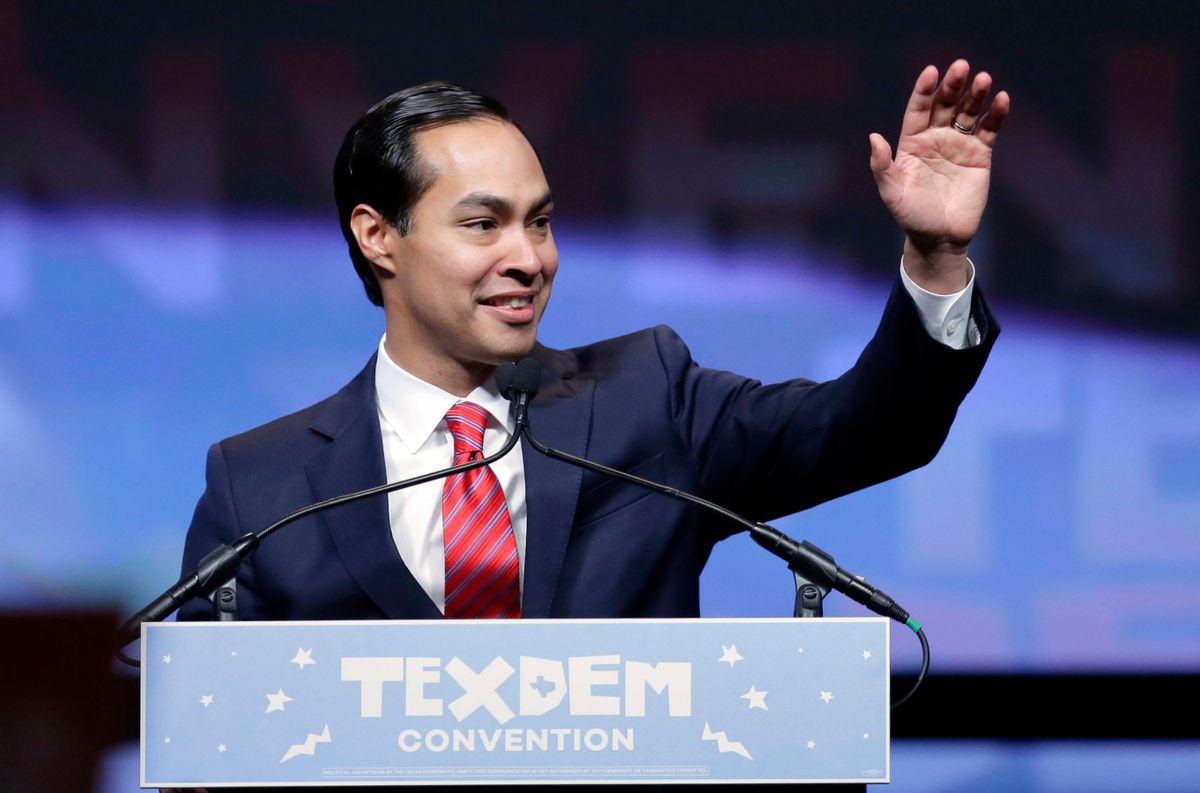 FILE - In this June 17, 2016, photo, Housing and Urban Development Secretary Julian Castro addresses the Texas Democratic convention in San Antonio. Hillary Clinton’s search for a running mate is moving into a more intense phase, according to several Democrats, as aides contact a pared down pool of candidates to ask for reams of personal information and set up interviews with the vetting team. Those on the shortlist include Sen. Elizabeth Warren, D-Mass., Sen. Tim Kaine, D-Va., and Castro.(AP Photo/Eric Gay) (AP)
--

"Well, look, I'm always for speaking to our adversaries, opening up diplomatic conversations," Castro told host Brianna Keilar on CNN. "The problem is that this president seems bent on approaching this very erratically, very haphazardly. As you know, Brianna, he did this at the last minute. And the problem with that is that, to be effective, this usually goes the other way around. There's a lot of staff work that goes into preparing a meeting like this so that concrete terms are on the table and you can get something out of the meeting."

He added, "They had the first summit, the Singapore summit, I guess just over a year ago, and North Korea has not abided by what it promised at that summit, which was to produce an inventory of their weapons stockpile, so that there could be a baseline for further talks. So I'm not quite sure why this president is so bent on elevating the profile of a dictator like Kim Jong-un when Kim Jong-un has not lived up to his promise from the first summit."

Castro expressed similar thoughts to host George Stephanopoulos for ABC's "This Week," an interview which also aired on Sunday.

"Well, look, I am all for speaking with our adversaries, but what's happened here is that this president has raised the profile of a dictator like Kim Jong-un, and now three times visited with him unsuccessfully, because he's doing it backward," Castro said. "Usually what happens, as you know George, is that there's an intense amount of staff work that goes into negotiating how these one of talks is going to go so you can hopefully get something out of it. We haven't gotten anything out of it. And after they had their first summit, the Singapore summit, he told the American people that North Korea was no longer a threat. Then after that, they continued to test their nuclear weapons and they have not even abided by one of the commitments that they made originally, which was to give an inventory of their nuclear stockpile."

On Sunday Trump became the first sitting American president to set foot on North Korean soil, with Kim Jong-un telling him through his interpreter that "it is good to see you again. I never expected to meet you in this place." Trump replied by saying, "Big moment, big moment."

During subsequent interactions with reporters, Kim said that the meeting with Trump "has a lot of significance because it means that we want to bring an end to the unpleasant past and try to create a new future, so it’s a very courageous and determined act."

Trump also said that "stepping across that line was a great honor. A lot of progress has been made, a lot of friendships have been made and this has been in particular a great friendship."

Castro is not the only high-profile Democrat to criticize Trump's attitude toward the North Korean regime. Former Secretary of State Madeleine Albright told Salon earlier this year that "I was asked whether the Singapore summit was a win-win or a 'Kim win.' It was a 'Kim win' because the President canceled some exercises that we have with our allies, the Japanese and the South Koreans, and it’s unclear to me what the North Koreans gave or what it is that they put up to this, especially since they have not agreed to any kind of way of an inventory or international way of figuring out what they have and what denuclearization — which is what we are trying to get — what is the measurement of that, what’s going on."