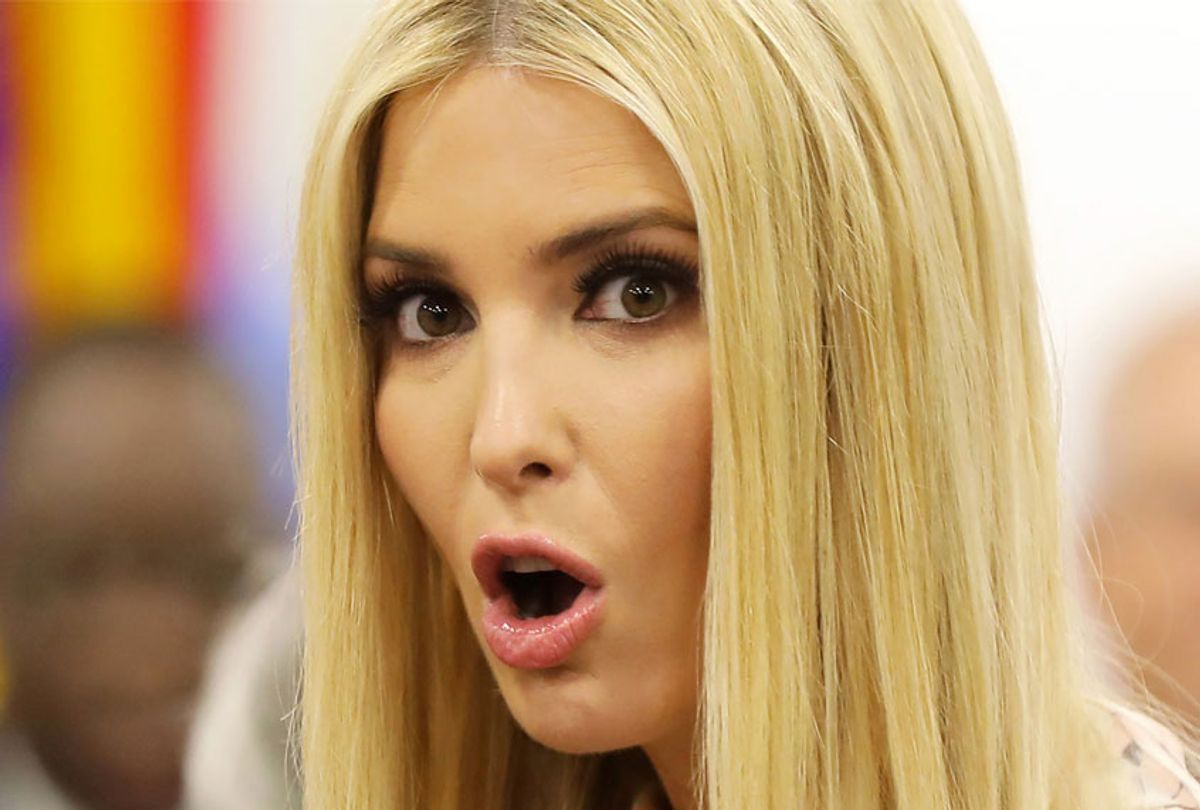 Advisor to the US President Ivanka Trump reacts during an event on the theme "Promoting the place of women at work" on the sidelines of the G20 Summit in Osaka on June 29, 2019. (Getty/DOMINIQUE JACOVIDES)
--

On Saturday, BBC journalist Parham Ghobadi posted a video on Twitter that helped launch the hashtag of the weekend: #UnwantedIvanka.

The 19-second clip — which was filmed at the G20 Summit in Osaka, Japan, and released by the French Presidential Palace — shows a small group of world leaders circled up: British Prime Minister Theresa May, French President Emmanuel Macron, Canadian Prime Minister Justin Trudeau and head of the International Monetary Fund Christine Lagarde.

And then to the side, gesturing in an attempt to interject, is Ivanka Trump.

“As soon as you start talking about the economic aspect of it though, a lot of people start listening who wouldn't otherwise listen," said May; without a breath, Trump responds: “And the same with the defense side I think, in terms of the whole ecosystem, it's been very male dominated.”

Without context of the conversation before the clip started, viewers can’t know if this is a reasonable statement from Trump or not — but the reactions of the world leaders answer that. Lagarde furrows her brow in confusion and then seems to shake off Trump’s input, while Macron glances unamused in her direction. The rest of the group avoids eye-contact with her.

The unspoken message is clear: “Be quiet and let the grown-ups talk.”

The internet obliged, of course.

This stream of Photoshopped images placing Ivanka Trump in historic situations where she clearly doesn’t belong is amusing, but it also points to President Donald Trump’s overwhelming need to keep the global spotlight locked on him — Ivanka being his favored brand ambassador — at all times and costs.

In response to the video, Rep. Alexandria Ocasio-Cortez (D-NY), tweeted that being someone’s daughter isn’t actually a career qualification.

“It hurts our diplomatic standing when the President phones it in & the world moves on,” Ocasio-Cortez wrote. “The US needs our President working the G20. Bringing a qualified diplomat couldn’t hurt either.”

But at a global event, a qualified diplomat could steal the spotlight President Trump so craves — or even just ensure that official talking points are communicated. Whereas Ivanka — who serves as a triple-threat amalgamation of frequent First Lady surrogate, doting daughter and presidential political advisor — always manages to reflect the attention back to President Trump.

Even if her track record on the political stage is spotty, at best.

This isn’t the first time Trump has used unexpected appearances by Ivanka to further his political agenda.

In 2017, Salon’s Erin Keane dissected the “Ivanka Drive-By,” a term coined by CNN to describe her habit of interrupting official meetings just to visit Dad, which echoed her childhood habit (or perhaps directive) to call her father while he was in meetings with industry titans and say “cute things.”

“Ivanka doesn’t materialize in the doorway like Bloody Mary in ballet flats to make Trump look like a better man. Good lord, when has he ever cared about looking like a better man?” Keane writes.

She continues: “A better theory is that her little snippet of choreography is designed to help Trump use men’s own fears of humiliation against them. Ivanka’s presence subliminally disarms his male opponents — and isn’t everyone who’s not related to Trump an opponent? — because a real man, our culture tells us, doesn’t make another man look small in front of his children.”

Keane concludes the piece by saying that the “White House is a place for adults,” and that if Ivanka wanted to be taken seriously as an advocate for women, she’d need to drop the little girl act. Nearly two years have passed, and while Ivanka is making an effort to be recognized on an international stage, incidents like those captured in the G20 video show that global leaders see her as a child trying to get in on conversations at the adult’s table.