Don't forget this: Trump's fans are loyal, and stuck with him through his Fourth of July fiasco 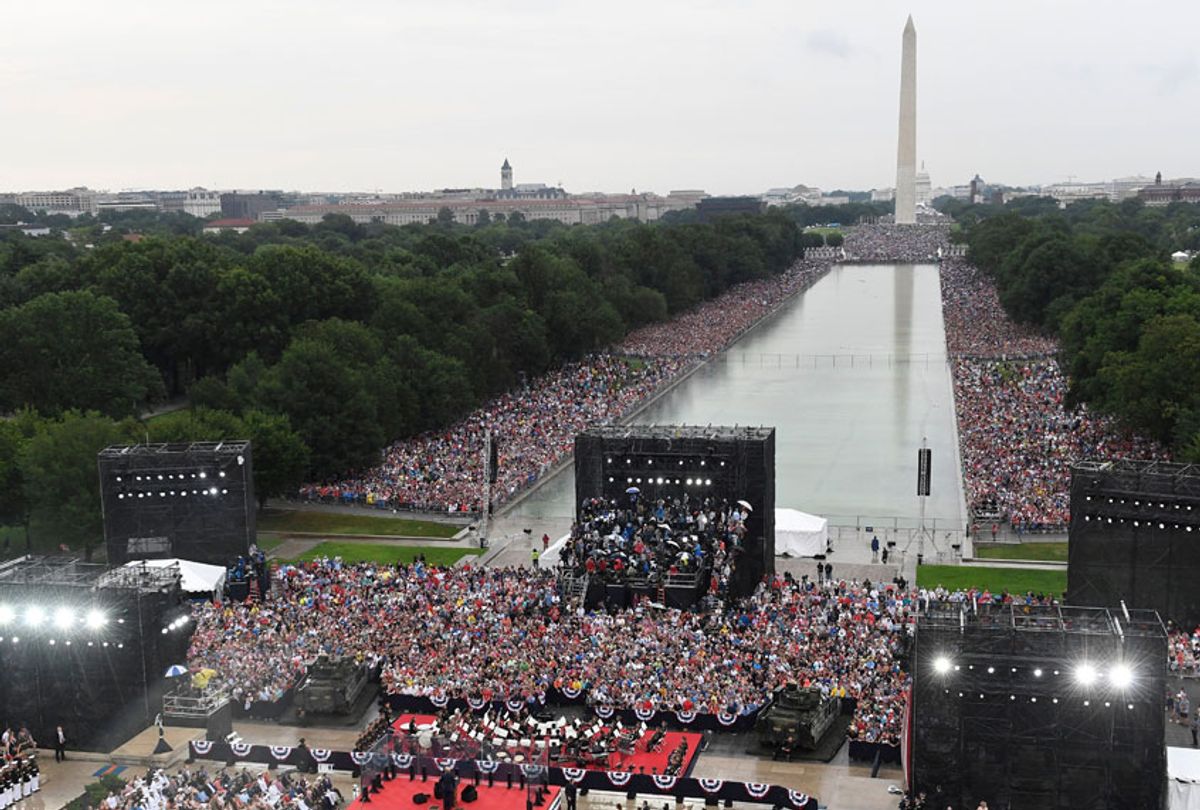 President Donald Trump speaks during the "Salute to America" Fourth of July event at the Lincoln Memorial in Washington, DC, July 4, 2019. (Getty/Susan Walsh)
--

It turns out Donald Trump is as good at being Joseph Goebbels as he was at being a casino magnate. His much-hyped Fourth of July program, during which Trump dishonored both Abraham Lincoln and Martin Luther King Jr. by acting out his fascist fantasies at the Lincoln Memorial, failed just as badly as the businesses Trump kept bankrupting through his career. It wasn't just the rain, either. Trump's speech was so boring that, despite being guided by a teleprompter, he lost his own thread and somehow managed to say that the American revolutionaries seized airports from the British redcoats in 1775.

Trump's attempt at spectacle was positively dreadful. But as he has been in the past, he was saved by the zeal of his followers, who, despite the rain and their obvious boredom, white-knuckled their way through Trump's droning speech. (Booze helps.) For the MAGAheads, this wasn't about fun or celebration. If they wanted that, they would have gone to see Carole King perform at the nonpartisan Fourth of July celebration at the U.S. Capitol. Instead, the crowd seemed driven by a grim sense of determination.

It turns out that Trump's base isn't in this because they're bamboozled by fascist theatrics or swept up in Trump's gaudy, cheap version of glamour. What this has always been about for the Trumpers is making a stand for white supremacy and male domination. While they may indeed long for some cheesy bombast, they will continue to stand there on a drizzly evening, even when all the glitz is stripped away and their reality TV leader is looking lame behind a wet barricade.

This is important: What drives the Trump base isn't actually Donald Trump himself. It's the bigotry. Everything else is gravy.

None of this should be surprising. Despite his ability to command nonstop attention, Trump himself has never been a good speaker or a particularly charismatic person. He gets attention not through the skills of an entertainer, but through the blunt force of a bully who, by throwing his victims in a locker or giving them a wedgie, is impossible to ignore. Trump is a terrible orator, as anyone who has had the misfortune to watch one of his terrible rallies on TV or in person — as I have done, unhappily — can tell you. He's incoherent and he rambles; his audience often appears lost, confused and not especially interested. That is true at every single MAGA rally and was true at Thursday night's event in Washington.

At least the MAGA rallies punctuate the crowd's boredom with opportunities for breakout fascist chanting of "Lock her up" or "CNN sucks." But even without those call-and-response moments, the crowd at Trump's Fourth hung in there, soggy but steadfast. They weren't there to see Trump, but to be seen, to show off their numbers and determination for the cameras, knowing how many hated liberals and journalists would be watching in horror from afar.

In the days before the rally, the news media was once again full of horrible stories about the don't-call-them-concentration-camps on the border. This likely fed into the Red Hat resolve to stand in the rain Thursday. Holding fast sent a clear message: Trump's fans aren't dissuaded by his human rights abuses. If anything, they are emboldened. As the headline of Adam Serwer's  immediately canonic Atlantic essay tells us, "The Cruelty Is the Point."

Trump's shocking victory in the Republican primary in 2016 has caused a number of pundits and ordinary political watchers to wonder whether the man just has some kind of charisma that is only visible to Fox News-watching yokels. Obviously Trump himself is totally convinced that his popularity with 40% of the country is proof of a personal allure that he always knew existed, even as most of the smart New York set laughed at him.

In truth, however, Trump supporters don't live in some other plane of existence where an obvious combover atop an orange face is handsome, or where listening to a narcissistic man-child ramble on for over an hour is interesting. He won in 2016 by being more of a racist troll than any of his opponents, and for no other reason. He could be five feet tall and only speak in a barely intelligible croak, but as long as he was locking kids up in cages, Trump's supporters would keep cheering him on.

During the 2016 campaign, Elspeth Reeve of the New Republic wrote an article drawing a connection between Barry Goldwater's doomed 1964 presidential bid and Trump's campaign, based on a 1964 New Yorker article by Richard Rovere, reporting on a Goldwater rally in Alabama. As Rovere pointed out, Goldwater was a boring speaker and the "lines he got from his writers were as flat as his delivery of them." It hardly mattered: The crowds were not really there for Goldwater, but because "Goldwater had made it possible for great numbers of unapologetic white supremacists to hold great carnivals of white supremacy."

Returning to 2016, Reeve concluded: "All that matters is the racism."

That observation is only reinforced after Trump's Fourth of July event. The pre-rally hype and levels of security made it seem like just another MAGA rally, which had the desired effect of driving off anyone who wasn't a true believer and therefore minimizing any chance that Trump might hear a heckler. But the speech itself avoided crossing the line into using a government-funded event as an overt campaign rally, which was no doubt a disappointment to his supporters.

Ultimately it doesn't matter what Trump said, beyond the faint satisfaction liberals may feel watching his supporters endure boredom. Trumpism isn't and has never been about Trump. It's about those who wish to impose their vision of white supremacy and male dominance on an America they fear might actually be starting to live up to its values of freedom and equality. It's about trolling the liberals by hijacking a site famous as a symbol of anti-racism for their authoritarian message.

Trump could have stood there for 45 minutes tunelessly humming hits of the '70s, and his followers would still have stood there doggedly. They were standing up for their hateful vision of America.

Frankly, this would all be easier to take if Trump supporters were, as commonly assumed, a bunch of dimwits who are roped in by the spectacle. The more disturbing truth is that, by and large, they know exactly what they're doing. The rain in Washington washed the spectacle away, and exposed the stalwart hate that is the beating heart of Trumpism.