On election night, it looked like Tiffany Cabán had won a key primary in Queens. Now she's losing by 20 votes 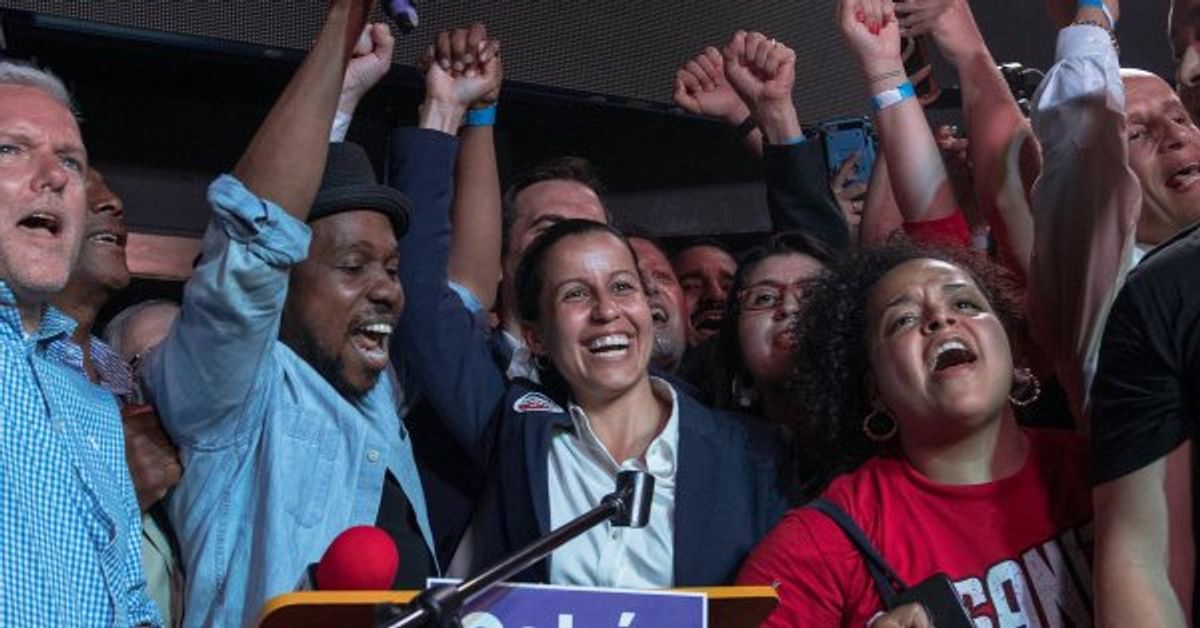 Tiffany Cabán declares victory on election night in Queens — but that victory is now in doubt.
--

Tiffany Cabán, a public defender who identifies as a democratic socialist and was backed by Rep. Alexandria Ocasio-Cortez and other New York progressives, declared victory last month after the election-night vote count showed her leading by about 1,100 votes over Queens Borough President Melinda Katz, who was favored by the local party establishment. On Wednesday, a count of paper ballots that had not been tallied on primary night pushed Katz ahead by 20 votes, triggering an automatic recount.

Cabán’s team acknowledged on primary night that there were still about 3,400 absentee ballots left to be counted, but believed it was highly unlikely that Katz could win enough of the remaining votes to pull ahead. According to the final results, however, Katz won 1,901 of the paper ballots while Cabán won just 751, the New York Times reports.

But progressives are crying foul after the Board of Elections invalidated more than 2,300 affidavit ballots, meaning provisional ballots that are given to voters who show up at the polls but are not listed on the voter rolls. The affidavits are then reviewed by the Board of Elections, which tosses the ballots it considers invalid.

Out of about 2,800 such ballots, elections officials invalidated nearly 80 percent of the votes and only counted 487 of the provisional ballots cast. Ballots may be invalidated if the person is not registered to vote, did not vote at the correct polling place or was not registered as a Democrat under the state closed primary rules. New York's voter registration system has been called the most undemocratic of any state, requiring voters to register a party affiliation at least six months before they can vote in a primary election, far longer than any other state.

Jerry Goldfeder, an election lawyer representing Cabán’s campaign, conceded that it was “not unusual to invalidate a lot of affidavit ballots because people are really not eligible to vote in a particular primary.”

“Unfortunately, that happens all the time,” he told the Times, but added that this was "an inordinately large number." Goldfeder added that the Cabán campaign has "already discovered a large number of those ballots where they shouldn’t have been invalidated.”

Cabán said in a statement Thursday that she believes she will win if her campaign can prevail in getting “every valid ballot” counted.

“Our campaign, and all of Queens, is up against a party machine that has ruled local politics and suppressed democracy for decades,” she said. “We are still fighting to make sure every valid ballot is counted. We are confident that if that happens, we will be victorious.”

Her supporters went further, accusing the party establishment of outright “stealing” the election.

New York State Sen. Alessandra Biaggi, who won her own race against an establishment candidate just last year, sarcastically tweeted that “STEALING elections is DEFINITELY the sign of a real leader & a great way to earn the trust of those you represent!”

“How dumb do they think we/the people are?” she wrote.

“That they can do it so blatantly and confidently speaks to how entrench[ed] corruption is at every level in Queens,” she wrote.

Ocasio-Cortez also suggested that “Tammany Hall-style political machinery” was at play after Intercept reporter Ryan Grim pointed out that the Board of Elections’ Queens commissioner was appointed by former Rep. Joe Crowley, the longtime establishment Democrat whom Ocasio-Cortez defeated in a 2018 primary.

Katz’s campaign accused Cabán’s supporters of trying to undermine the democratic process with accusations of rigging.

“It’s irresponsible, reckless, and completely wrongheaded to claim any sort of malfeasance for a practice that has been completely liberalized over the past decade,” Katz campaign consultant Matthew Rey told the Times.

The two campaigns will now square off before the Board of Elections to argue which ballots should or should not be counted. A recount is scheduled to begin Monday.

Though only about 70,000 ballots were cast, the race will have significant consequences for Queens, a borough of New York City with a larger population than 16 entire states. Cabán has vowed sweeping changes, including ending cash bail and decriminalizing drugs, sex work and crimes of poverty. Katz agreed with some of those proposed reforms, but “generally didn’t go as far as the other candidates in the race,” according to Vox.

“In an election with only 70,000 ballots were cast, more than 2,300 ballots were invalidated,” he wrote. “As we look forward to 2020, states need to enfranchise voters, not find ways to reject their votes. If they don't, the courts should step in.”