Where did the "Big Little Lies" spark go?

HBO still has a summertime hit in season 2 of Reese Witherspoon's drama, but it's noticeably less intoxicating 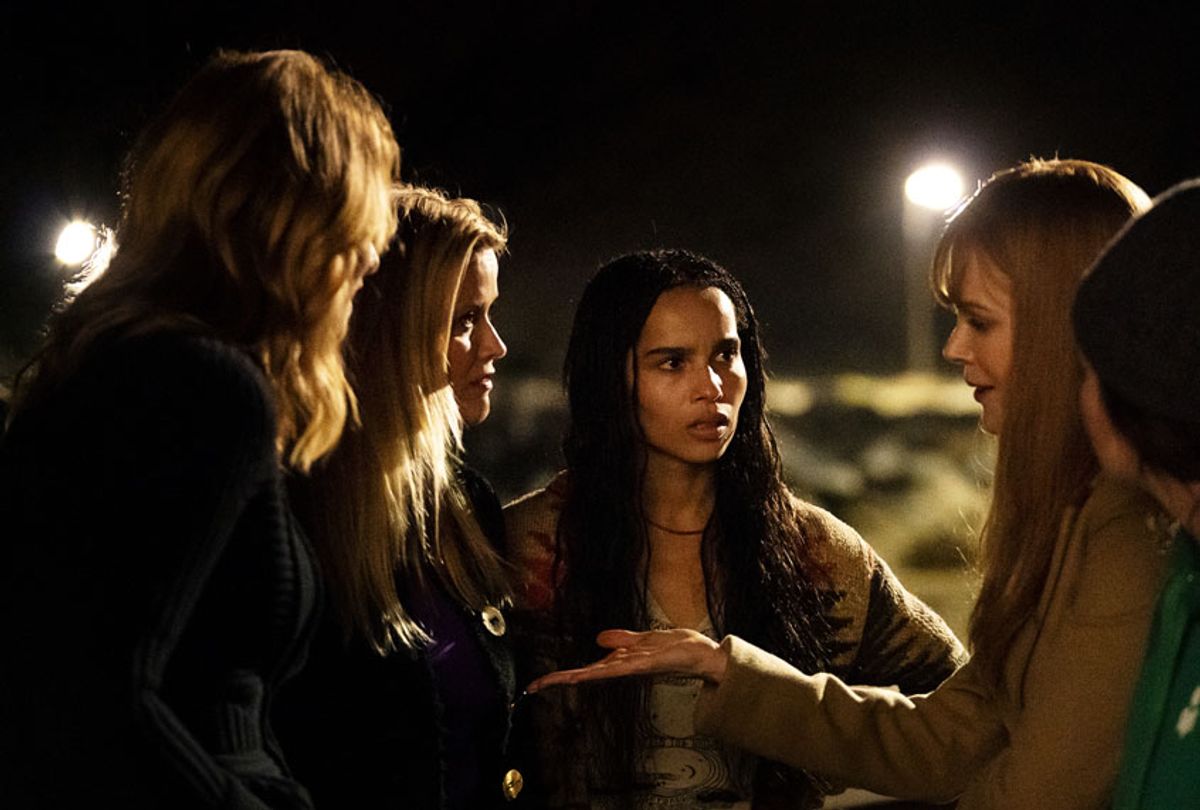 Southern California experienced a couple of earthquakes over the Independence Day holiday that were big enough to feel, and significant enough to cause worry. Not long after, the Los Angeles Times published an extensive multimedia project about the perils rising sea levels pose to California coastal towns like Monterey, where the action of HBO’s “Big Little Lies” takes place.

The message is clear in both cases: whether by land, or sea, forces that we in part set in motion, forces cannot be scheduled or controlled, threaten to devour places and lives taken for granted.

To watch the second season you wouldn’t know that the Pacific is on the verge of rising up to swallow the Monterey Five’s playground; their lives are flooded with enough ennui as it is. But the characters' collective despair is a churning build to a tsunami that may never hit land.

One can’t deny the feeling there’s something way out past the horizon that wants to crest. But more than halfway through the drama's current seven-episode season, the watch is feeling like a real bummer.

Nature is influenced by cause and effect, as the ongoing lesson of the climate crisis teaches, with the causes often linked to something exciting and fun, and the effects amounting to the detrimental cost for that excitement and fun. Everyone loves party balloons; hardly anybody is aware that their trashed remains kill wildlife.

Season 1 of “Big Little Lies” is a version of that undeniable good time. Akin to some kind of champagne cocktail, its tone achieved the perfect mixture of an effervescent nibble on the palate followed by a liquor kick, with a hint of bitters throughout, especially at the finish. Highly drinkable, if not everyone’s drink.

Nevertheless, even a teetotaler might understand the appeal simply by looking at the golden fizz of it — it’s a seductive mix.

Maybe that’s why this second season feels too sober in comparison. The first's cause is announced from the get-go: there was a murder in Monterey, and the story dangled that reality in front of us for the entire season as we followed four sort-of-likable, frequently overbearing protagonists through their very privileged lives.

Whereas season 2's episodes test our faith in the story and affection for the characters by almost entirely doing away with the gauze of humor and camp that enrobed the first season. Instead they slowly tread water in a sea of existential dread as the show moves towards some unknown outcome.

Now, I refuse to whinge about the fact that “Big Little Lies,” based on Liane Moriarty’s novel, was originally conceived as a limited series, presumed to a one-and-out affair. By now people know a network can and will find a way to tack on new chapters to any seemingly closed storyline if the numbers are strong enough.

Season 2 does not lack for engaging components, although  David E. Kelley doesn’t smoothly blend those parts into a riveting whole in his scripts. Viewers still find "Big Little Lies" to be highly watchable, evidenced in the increase in viewership between the first and second seasons; the July 7 episode, the fifth out of seven, netted the series’ highest ratings yet.

And this second season admirably plumbs the bitter, bleak crises burbling beneath the facade of wealth these families have constructed, ostensibly for the sake of their children but demonstrably to impress and one-up each other. That's the part about the first season that worked, too; as I previously observed, the drama is at its best when it examines the divisions between ultimate insiders and others who resent them. These new episodes are most effective when they reframe the divide to examine the potent, fraught bond between parents and children, mainly mothers and their sons and daughters.

It’s still a summer hit. What’s missing is the buzz.

Seemingly perfect Madeline Mackenzie (Reese Witherspoon) spins out after her husband Ed (Adam Scott) find out about her extramarital affair from, of all sources, Madeline's older daughter Abigail (Kathryn Newton). Newly widowed Celeste Wright (Nicole Kidman) is barely holding it together as she fends off a barrage of psychological and now legal assaults from her mother-in-law Mary Louise (Meryl Streep).

In grieving the suspicious death of her son Perry (Alexander Skarsgård) and refusing to accept he was an abusive rapist, Mary Louise battles Celeste for custody of Celeste and Perry's sons. She also chips away at the psychological stability of Jane  Chapman (Shailene Woodley), Perry’s rape victim and, she finds out, the mother of a grandson she didn’t previously know of.

Closer to the group this time but still on the fringes is Zoe Kravitz’s Bonnie Carlson, who dashes in to save Celeste from Perry’s bloody wrath at the end of last season, accidentally pushing him down a flight of stairs in doing so. That act’s wake is breaking Bonnie and her tenuous marriage with Nathan (James Tupper).

Cause results in effect, and there could not be a second season without examining the psychological toll of keeping the truth of Perry’s death a secret.

That said, minus the entertaining histrionics of Dern’s Renata (again, spin off this character and put her in a comedy about starting over, HBO!) and the manipulative ugliness of Meryl Streep’s pinched Mary Louise, these new chapters feel like they’re dragging us to the finish instead of dancing us to the end of a mystery, as they did before.

This is not the performers’ fault, nor does it lay in the lap of director Andrea Arnold, whose subtle framing and editing choices convey with fine precision the sensation of a place and its people falling apart by degrees, rock by rock spilling into the ocean. These, in fact, may be what’s maintaining the faith in these new hours despite the slow down.

Streep’s inclusion is this new season is both a blessing and a revelation of the ways that these new episodes come up short. She pours her soul and then some into Mary Louise which, of course. She’s Meryl Streep.

Yet even as she delivers spine-straightening moments again and again — why not just hand her an Emmy for that crystal-shattering scream at the start of the season? — for most of the season it’s tough to shake the notion that she’s heaving to add dimension to a character that's basically the quintessential monster-in-law.

At least Streep’s Mary Louise is a tragedy catalyst, prodding Celeste and Jane into battle mode and coaxing forth fresh emotional range from Nicole Kidman, whose work feels more grounded than previously, and Shailene Woodley, who explores dark corners as Jane contends with lingering psychological trauma revealed as she enters a new relationship with coworker Corey (Douglas Smith).

Kravitz, frustratingly sidelined in season 1, is particularly stunning in recent, revelatory episodes.  In allowing a view into Bonnie Carlson’s psyche, and her complicated relationship with her mother Elizabeth (Crystal Fox), Kravitz’s quivering balance of despair and rage is palpable. And it lends heft to the fifth episode, as she grapples with flashes of childhood memory blurring her mother's affection and violent outbursts, shuffled with anger at knowing her father Martin (Martin Donovan) didn’t adequately protect her.

These storylines illustrate this season’s central if unspoken theme surrounding fault and blame. Last year's lie remains a main source of tension, but it's not the source. Rather, the central crimes and mysteries are of the variety parents visit on their children, intentionally or unwittingly, and their longterm impact.

And these threads make “Big Little Lies” compelling particularly when the brazenly ridiculous mixes with the sublimely tragic: a brilliant example is the opulent disco party Renata insists on having even as she and her dishonest husband Gordon (Jeffrey Nordling) drive back and forth between bankruptcy court and their seaside castle.

The party is for their child, who was born decades after disco died, and Renata dresses herself and her daughter Amabella (Ivy George) in matching outfits. But this is Renata drinking the dregs of a dream she made and Gordon destroyed, and has little to do with making her child’s fantasies come true.

Still, that sorrow is festively dressed in loud colors and metallic sequins, capturing a little of that first season sparkle. Whereas in most scenes we can only wonder why Madeline seems stuck in a spin cycle, although Witherspoon’s adrift performance allows Scott’s dramatic ability to shine brighter.

Come to think of it, a few of the season’s inadequacies occasionally bring more notice to what’s working.

We may perhaps newly appreciate the wry humor of Madeline and Ed’s daughter Chloe (Darby Camp) signaling her awareness of her family’s fractures by drawing a picture of a door and her mother for a homework assignment about pairing opposites. The door, Chloe explains, is hinged. Ha ha.

We might love hating Streep’s Mary Louise as much as we feel for Celeste and Perry’s twins Max and Josh (Nicholas and Cameron Crovetti). Mary Louise is a thorn, but her arrival enables Jane and Ziggy (Iain Armitage) to confront the truth of Ziggy’s origins and grant the characters some kind of peace, however disquieting, in their refusal to allow Perry’s sins to determine the sort of person his son will become.

These are people yearning to come together, as the first season’s final frame hinted, and maybe that’s the issue. We initially got to know Madeline, Renata, Celeste, Jane and Bonnie separately, and we've experienced less of them leaning together in a profound way. Instead, this season is one long tight focus on the shuddering prelude to their crumbling.

That can be fascinating, and it should have been throughout the season instead of finally and definitively in hour 5, following four episodes of slow burn and fizzle.

Every disaster, natural and unnatural, reckons with fault and blame. I suspect — really, I hope —  the season's last two episodes erupt in a way that retrofits the tone of a storyline that's delayed finding its kick. Don’t forget, we’re also entering wildfire season.

Otherwise, as Mary Louise says, a number of “Big Little Lies” viewers may find that people can move on after tragedy. Just not together sometimes.