Graham defends Trump's racist attacks on lawmakers on "Fox & Friends": "They hate our own country"

"We all know that AOC and this crowd are a bunch of communists," Graham told Trump's favorite morning show hosts 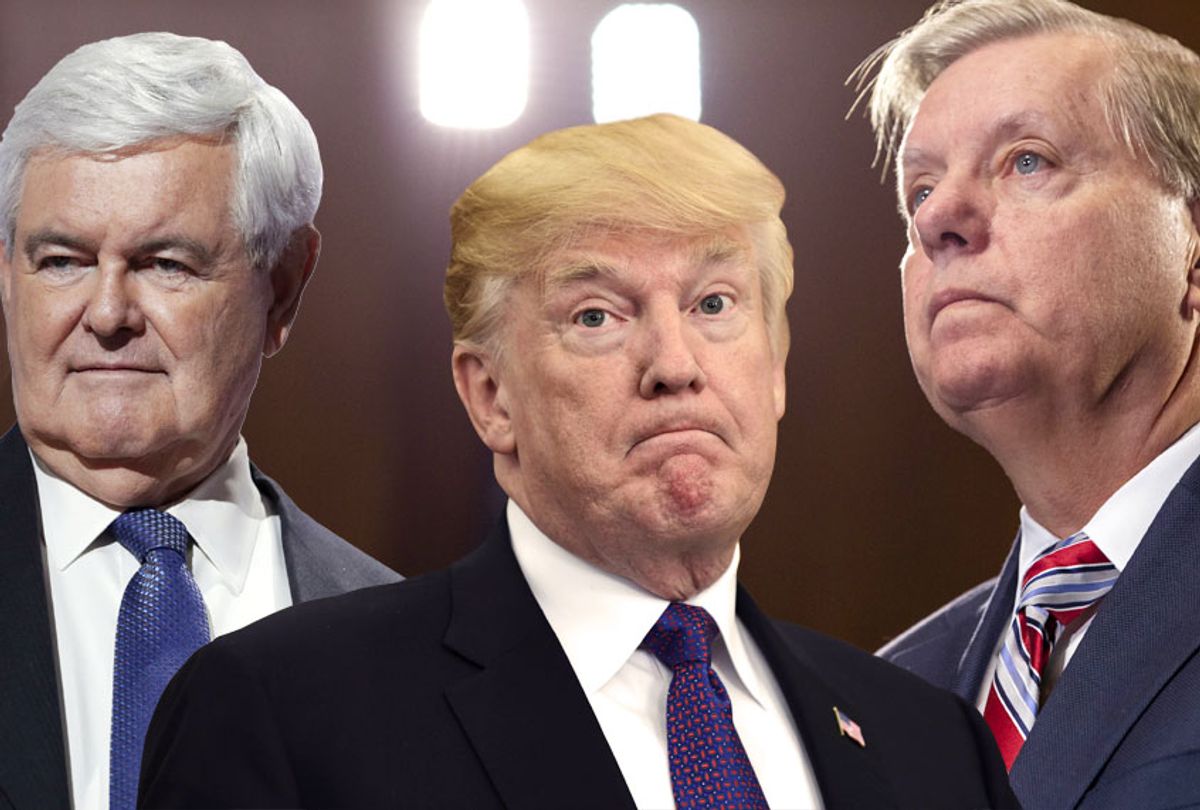 Two of President Donald Trump's staunchest allies, former Speaker of the House Newt Gingrich and Sen. Lindsey Graham, R-S.C., defended the commander-in-chief on "Fox & Friends" after the president doubled down on racist tweets sent over the weekend, in which he said four liberal Democratic congresswomen should "go back and help fix the totally broken and crime infested places from which they came."

During an appearance on Trump's favorite morning show, Gingrich defended the president's tweets, which are widely believed to be about the four freshmen women of color known as "the squad" — Reps. Alexandria Ocasio-Cortez of New York, Ayanna Pressley of Massachusetts, Rashida Tlaib of Michigan and Ilhan Omar of Minnesota. (Omar is the only member of "the squad" who actually born outside of the U.S.)

"Well, I think the president believes that the more he can get the country to look at the so-called 'Squad,' the more he can get them to realize how radical they are and how fundamentally anti-American their views are in the long run, the better off he is," Gingrich said. "I think he would like to see them as sort of the front page of the Democratic Party. And I think he thinks anything he does to elevate them is to his net advantage."

He later added that "there are things going on that are just crazy. Over the weekend there were 1,000 people in Aurora, Colo., attacking an American building, tearing down the American flag, hanging it back up upside down, having painted abolish ICE on it and flying next to it the Mexican flag. Now, I think it's reasonable for the average American to get pretty angry, and this all helps re-elect Trump. I mean, are you on the side of the people who deface and smear the American flag and decide to fly the Mexican flag? Or are you on the side of people who think, you know, this is the United States? We have the right to have respect for our institutions and respect for our history, and I think this is going to be a major dividing line in 2020."

In his appearance on the same broadcast, Graham encouraged the president to "knock it down a notch" while also defending his overt racism by casting the squad as "a bunch of communists" who are allegedly "anti-Semitic."

"He's going to win. Mr. President, you're going to win. Just knock it down a notch," Graham said when discussing Trump's fortunes for the 2020 presidential election.

When asked to clarify what he meant, Graham opined that "we all know that AOC and this crowd are a bunch of communists. They hate Israel. They hate our own country. They're calling the guards along our border — the border patrol agents — concentration camp guards. They accuse people who support Israel of doing it 'for the Benjamins.' They're anti-Semitic. They're anti-America. Don't get down — aim higher."