"The House cannot allow the president’s characterization of immigrants to our country to stand," Nancy Pelosi says 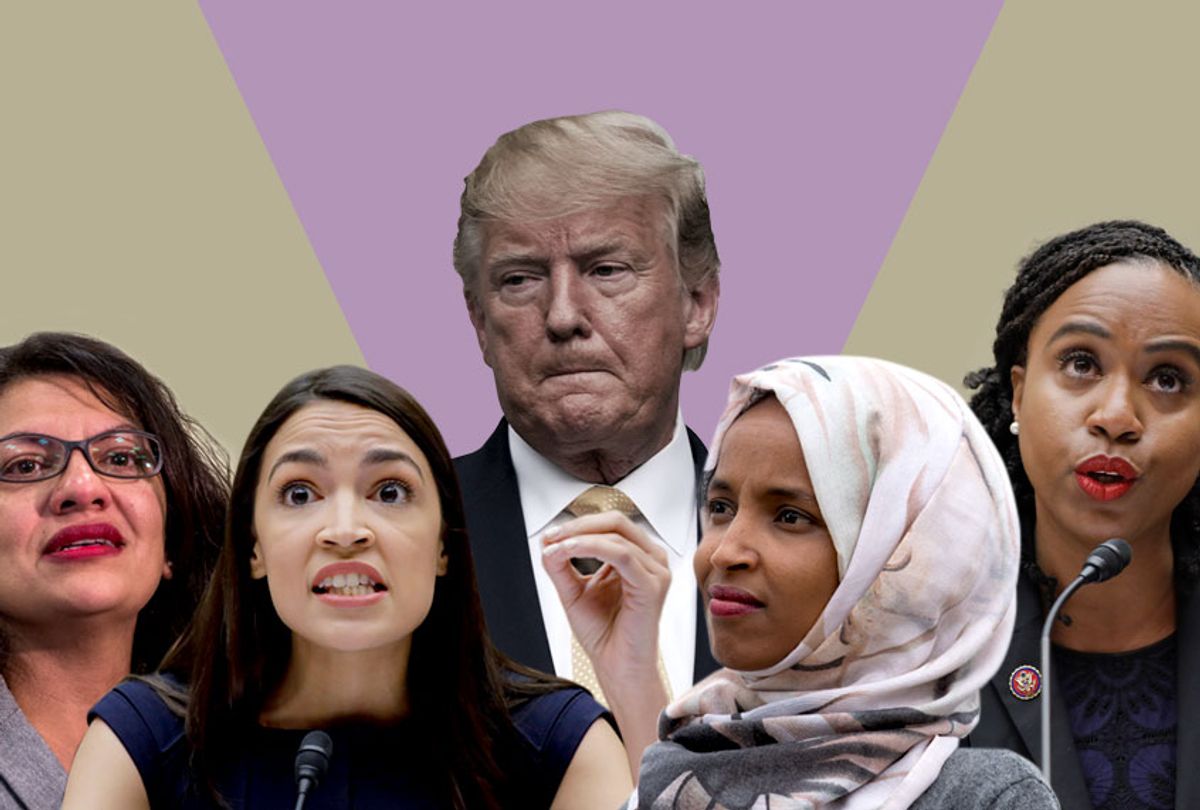 President Donald Trump faces a rebuke from the House of Representatives for his racist tweets on Sunday — even as he continues to double down on his remarks.

A group of House Democrats who were born in other countries, including Rep. Tom Malinowski of New Jersey, who was born in communist Poland, are drafting a resolution condemning the president for his "xenophobic tweets," according to the Los Angeles Times. House Speaker Nancy Pelosi encouraged the resolution in a letter to her colleagues, writing that "our caucus will continue to forcefully respond to these disgusting attacks. The House cannot allow the president’s characterization of immigrants to our country to stand."

Pelosi's letter echoed a tweet she sent on Sunday attacking Trump's comments. "When @realDonaldTrump tells four American Congresswomen to go back to their countries, he reaffirms his plan to 'Make America Great Again' has always been about making America white again," she wrote. "Our diversity is our strength and our unity is our power."

Republicans have also begun to speak out against Trump's remarks. Sen. Pat Toomey of Pennsylvania said in a statement Monday that "three of the four were born in America, and the citizenship of all four is as valid as mine." Although the president did not name the four legislators, it is widely believed that he spoke of "the squad," a group of four freshman women of color made up of Reps. Alexandria Ocasio-Cortez of New York, Ayanna Pressley of Massachusetts, Rashida Tlaib of Michigan and Ilhan Omar of Minnesota. (Omar is the sole member of "the squad" who actually born outside of the U.S.)

"I couldn’t disagree more with these congresswomen’s views on immigration, socialism, national security and virtually every policy issue," Toomey continued. "But they are entitled to their opinions, however misguided they may be. We should defeat their ideas on the merits — not on the basis of their ancestry."

Similarly, Sen. Susan Collins of Maine said the president's tweet was "way over the line, and he should take that down."

The conservative journal National Review also expressed dismay with Trump's comments, with senior political correspondent Jim Geraghty describing Trump's tweets as "an act of political stupidity that is simply jaw-dropping"; defending "the squad" of liberal legislators by saying that "love them or hate them, they all legitimately won House races in heavily Democratic congressional districts"; and pointing out that "at the exact moment that Democrats are realizing the toxicity of identity politics, Donald Trump endorses the notion that these women are defined by where they come from."

The original tweets sent by Trump said, "So interesting to see 'Progressive' Democrat Congresswomen, who originally came from countries whose governments are a complete and total catastrophe, the worst, most corrupt and inept anywhere in the world (if they even have a functioning government at all), now loudly and viciously telling the people of the United States, the greatest and most powerful Nation on earth, how our government is to be run. Why don’t they go back and help fix the totally broken and crime infested places from which they came. Then come back and show us how it is done. These places need your help badly, you can’t leave fast enough. I’m sure that Nancy Pelosi would be very happy to quickly work out free travel arrangements!"

Trump later doubled down on those sentiments, accusing the four Democratic congresswomen of speaking badly of the U.S., hating Israel and being racist themselves. Ironically, Trump's words have unified the Democratic Party at the exact moment that a rift was forming as Ocasio-Cortez accused Pelosi of "the persistent singling out" and "outright disrespectful" treatment of "newly-elected women of color."

Ocasio-Cortez's remarks came in response to Pelosi describing "the squad" as being insignificant in the broader Democratic Party, saying that "all these people have their public whatever and their Twitter world, but they didn’t have any following. They’re four people, and that’s how many votes they got."