Unsealed court documents describe a "series of calls, text messages and emails" between Trump and his inner circle 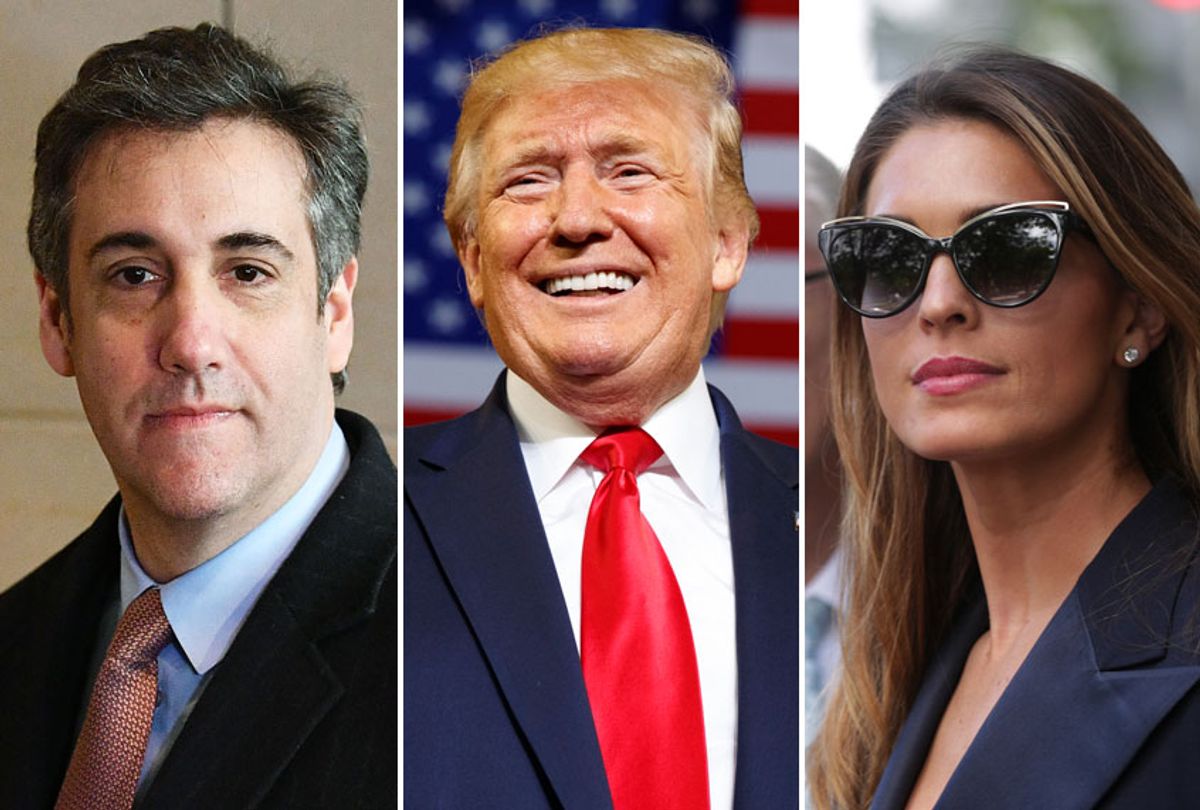 The FBI believed then-presidential candidate Donald Trump was closely involved in a scheme to hide hush-money payments made to adult film star Stormy Daniels, who alleged an affair with Trump, according to newly-unsealed court documents.

The documents, released Thursday, describe a "series of calls, text messages and emails" in October 2016 between the president's former lawyer and personal "fixer," Michael Cohen; the president's then-campaign press secretary, Hope Hicks; two executives at American Media Inc. (AMI), David Pecker and Dylan Howard; and Trump himself. Keith Davidson, who was then Daniels' attorney, was also on some of the calls.

The conversations were apparently about Daniels, whose legal name is Stephanie Clifford, according to the documents. They detail how Cohen worked to arrange a deal with Davidson and AMI, the parent company of the National Enquirer.

Cohen's plan was to have AMI purchase and bury Daniels' story — a practice known as "catch and kill" — and Cohen would then reimburse the media company for its expenses.

AMI admitted it was involved in an effort to "catch and kill" stories that could damage Trump late last year.

"Based on the timing of these calls, and the content of the text messages and emails, I believe that at least some of these communications concerned the need to prevent Clifford from going public, particularly in the wake of the Access Hollywood story," an FBI special agent investigating the communications wrote in the released documents.

The unsealed documents show Cohen acting as an intermediary. He was involved in a series of phone calls, some involving Trump and Hicks and others involving Pecker and Howard.

The documents show Cohen was particularly anxious on Oct. 17, a day when he formed an LLC called Essential Consultants in Delaware to funnel the money to Daniels. It was also when Davidson threatened to cancel the deal by the end of the day if Cohen did not complete the transaction.

"Michael — if we are ever going to close this deal — in my opinion, it needs to be today," Davidson wrote in a text message.

Cohen's first call after he spoke to Davidson at the end of the day was an eight-second call to Trump, although it is unclear if they spoke.

Daniels did not end up going public that day, and the talks picked up again on Oct. 25.

The following day, on Oct. 26, Trump and Cohen spoke twice in the morning, according to the search warrant.

By the end of that day, Cohen's transferred $131,000 from a home equity line of credit to Essential Consultants, according to the document.

Cohen made a $130,000 payment to Davidson on Oct. 27 — with the funds intended for Daniels — "for the purpose of securing her ongoing silence with respect to the allegations that she had an extramarital affair with Trump," the documents state.

The FBI agent wrote in the document that the information was gleaned from a review of telephone records and warrants to obtain Cohen's emails.

During her testimony before Congress last month, Hicks denied ever being present during conversations between Cohen and Trump about Daniels — or ever having direct knowledge of Cohen's payments to Daniels.

The records released Thursday were unsealed by an order from U.S. Judge William Pauley, after federal prosecutors said they concluded their investigation into the campaign finance violations.

Cohen is currently serving a three-year prison sentence for a host of crimes, including tax evasion, bank fraud, lying to Congress and campaign finance violations tied to the hush-money payments paid to two women who claimed they had affairs with Trump.

His sentencing was unusual, because it involved guilty pleas he made in two separate cases: one brought by prosecutors in New York over tax evasion, bank fraud allegations and campaign finance violations; and a second by the team of former special counsel Robert Mueller, who investigated Russian meddling in the 2016 presidential election. The probe of Cohen's business dealings placed him under immense pressure in the Southern District of New York, while Mueller continued his separate investigation. (Some of the evidence incriminating Cohen was reportedly uncovered by Mueller's investigators, who then handed it over to federal prosecutors.)

In the case brought by Mueller's office, Cohen pleaded guilty to lying to Congress about a Trump Tower project in Moscow, as well as about the extent of Trump's involvement. Cohen claimed that Trump was personally aware of the deal, signing a letter of intent and discussing it with Cohen on two other occasions.

In August 2018, Cohen pleaded guilty to campaign finance charges and admitted that he had paid hush money to women who claimed affairs with Trump in order to silence them. Cohen claimed the payments were made or orchestrated on behalf of Trump in an attempt to influence the outcome of the 2016 presidential election. The payments are considered by the government to be an illegal donation to Trump's campaign, since they were intended to improve Trump's election chances. The legal limit for individual contributions in a general election is $2,700.

During his plea hearing, Cohen revealed that he had made payments to the women "in coordination and at the direction of a candidate for federal office" who was later identified as Trump.

On Wednesday, after Pauley suggested the government's probe had concluded, the president's attorney, Jay Sekulow, appeared to celebrate the end of the "investigation surrounding these ridiculous campaign finance allegations."

Cohen's lawyer, Lanny Davis, however, indicated his disapproval with prosecutors' decision to drop the proceedings in his own statement issued Wednesday evening.

"Case closed? Why is Michael Cohen — after all his voluntary cooperation and testimony that Mr. Mueller said was credible and went to 'core issues' and all the information and documents he voluntarily provided to prosecutors and to congress — the only member of the Trump company to be prosecuted and imprisoned?" Davis said. "Especially since prosecutors found that virtually all of Michael’s admitted crimes were done at the direction of and for the benefit of Donald Trump? Why?"

In a statement of his own made from prison on Thursday, Cohen said that "as I stated in my open testimony, I and members of The Trump Organization were directed by Mr. Trump to handle the Stormy Daniel's (sic) matter; including making the hush money payment. The conclusion of the investigation exonerating the Trump Organization's role should be of great concern to the American people and investigated by Congress and the Department of Justice."