"There still remains much to be told, and I look forward to the day when I can share the truth," Cohen says 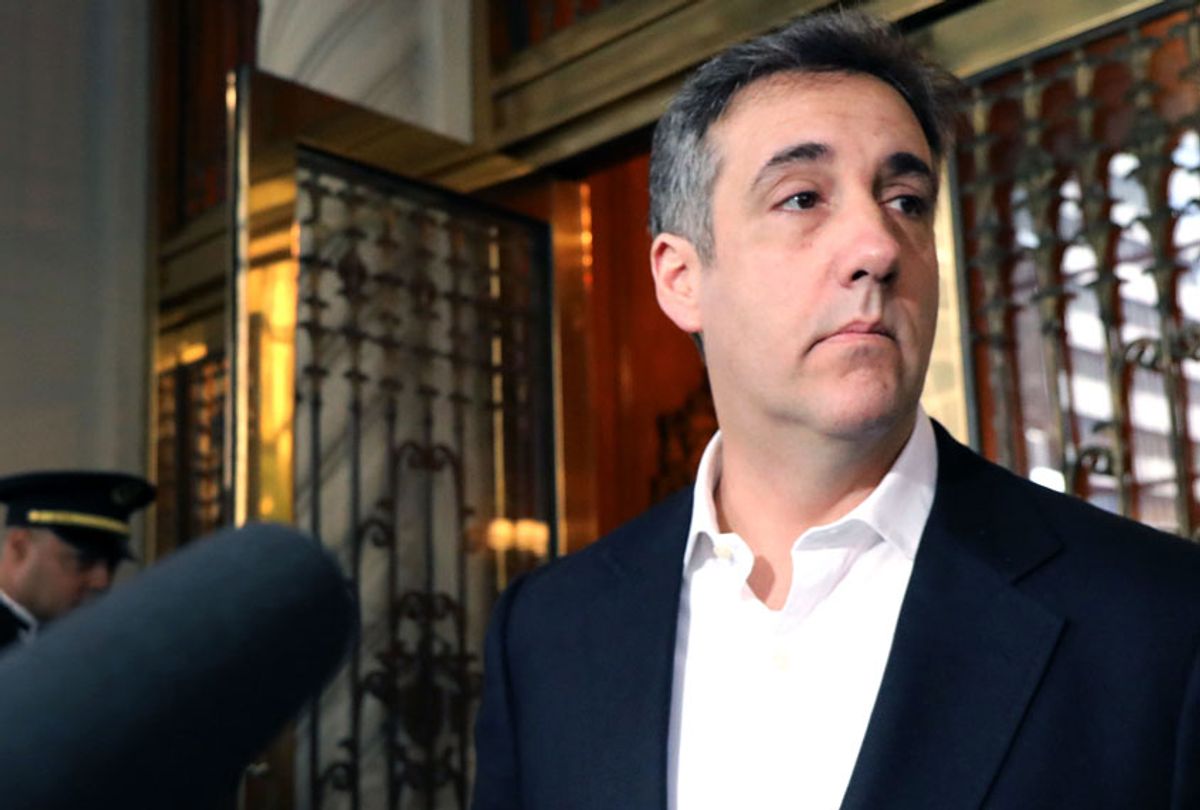 Michael Cohen, the attorney who spent many years as President Donald Trump's personal lawyer and media attack dog, will officially complete his transition from "fixer" to prison inmate on Monday as he reports to a federal prison in Otisville, New York.

Cohen, who also served as the executive vice president of the Trump Organization and national deputy finance chairman of the Republican National Committee, faces a 2 p.m. ET deadline to report to the Federal Correctional Institution, Otisville, which is located roughly 70 miles northwest of the city of New York, for crimes including campaign finance violations and lying to Congress.

"There still remains much to be told, and I look forward to the day when I can share the truth," Cohen told reporters Monday outside his New York apartment, before reporting to prison.

Cohen was initially set to start his sentence March 6, but his attorneys argued successfully for his prison date to be postponed by two months so he could recover from surgery and get his affairs in order. Cohen, who once said he would take a bullet for Trump, used those months to turn on his former boss in a quest for redemption.

His sentencing was unusual, because it involved guilty pleas he made in two separate cases: one brought by prosecutors in New York over tax evasion, bank fraud allegations and campaign finance violations; and a second by the team of special counsel Robert Mueller, who investigated Russian meddling in the 2016 presidential election. The probe of Cohen's business dealings placed him under immense pressure in the Southern District of New York, while Mueller continued his separate investigation. (Some of the evidence incriminating Cohen was reportedly uncovered by Mueller's investigators, who then handed it over to federal prosecutors.)

In the case brought by Mueller's office, Cohen pleaded guilty to lying to Congress about a Trump Tower project in Moscow, as well as about the extent of Trump's involvement. Cohen claimed that Trump was personally aware of the deal, signing a letter of intent and discussing it with Cohen on two other occasions.

The Manhattan U.S. Attorney's Office's investigation of Cohen emerged into public view last April after FBI agents raided his office, apartment and hotel room. Agents seized a trove of potential evidence contained in eight boxes of paperwork, about 30 cellphones, iPads and computers — and even the contents of one of his shredders.

Four months later, in August 2018, Cohen pleaded guilty to campaign finance charges and admitted that he had paid hush money to women who claimed affairs with then-presidential candidate Trump in order to silence them. Cohen claimed the payments were made or orchestrated on behalf of Trump in an attempt to influence the outcome of the 2016 presidential election. The payments are considered by the government to be an illegal donation to Trump's campaign, since they were intended to improve Trump's election chances. The legal limit for individual contributions in a general election is $2,700.

Cohen pleaded guilty again in November after he was charged by Mueller's office of lying to Congress. He admitted that he lied to Congress about the duration of talks concerning a possible Trump Tower in Moscow "out of loyalty" to Trump. That December, Trump assailed his former attorney on Twitter, calling him a "rat." And by early the following year, Cohen took his war against Trump to Capitol Hill.

Cohen testified publicly before the House Oversight and Reform Committee in February, where he detailed wide-ranging allegations against his former boss. He also came equipped with evidence appearing to implicate the president: copies of checks signed by Trump and his eldest son, Donald Trump Jr., which Cohen claimed were used to reimburse him for some of the hush money.

He testified privately in three closed-door sessions with the Senate and House Intelligence Committees. And Cohen later appealed to Democrats on those panels to help him again postpone his prison date, telling them in April through his attorneys that he had recently gained access to a trove of documents that could bolster their probes of Trump. But he did not get a second delay.

While never mentioning the five counts of tax evasion to which he pleaded, Cohen's adviser Lanny Davis recently argued that his client had taken the fall the punishment for Trump and others over the payments to adult-film actress Stormy Daniels and former Playboy model Karen McDougal.

Davis said Monday that he would "continue questioning why Michael is the only person within the Trump Organization to be prosecuted for crimes committed at the direction of and for the benefit of Mr. Trump."

"Michael may be sentenced within the walls of a federal correctional institution. But the truth has no walls," he continued. "Michael will continue to be accessible to [sic] congress and to federal, state, and local law enforcement. Of that I am certain."

Cohen confessed at a hearing late last year that he felt it was his "duty" to cover up Trump's "dirty deeds," although he also acknowledged responsibility for his crimes.

"I want to be clear," he told the court. "I blame myself for the conduct which has brought me here today, and it was my own weakness and a blind loyalty to this man that led me to choose a path of darkness over light."