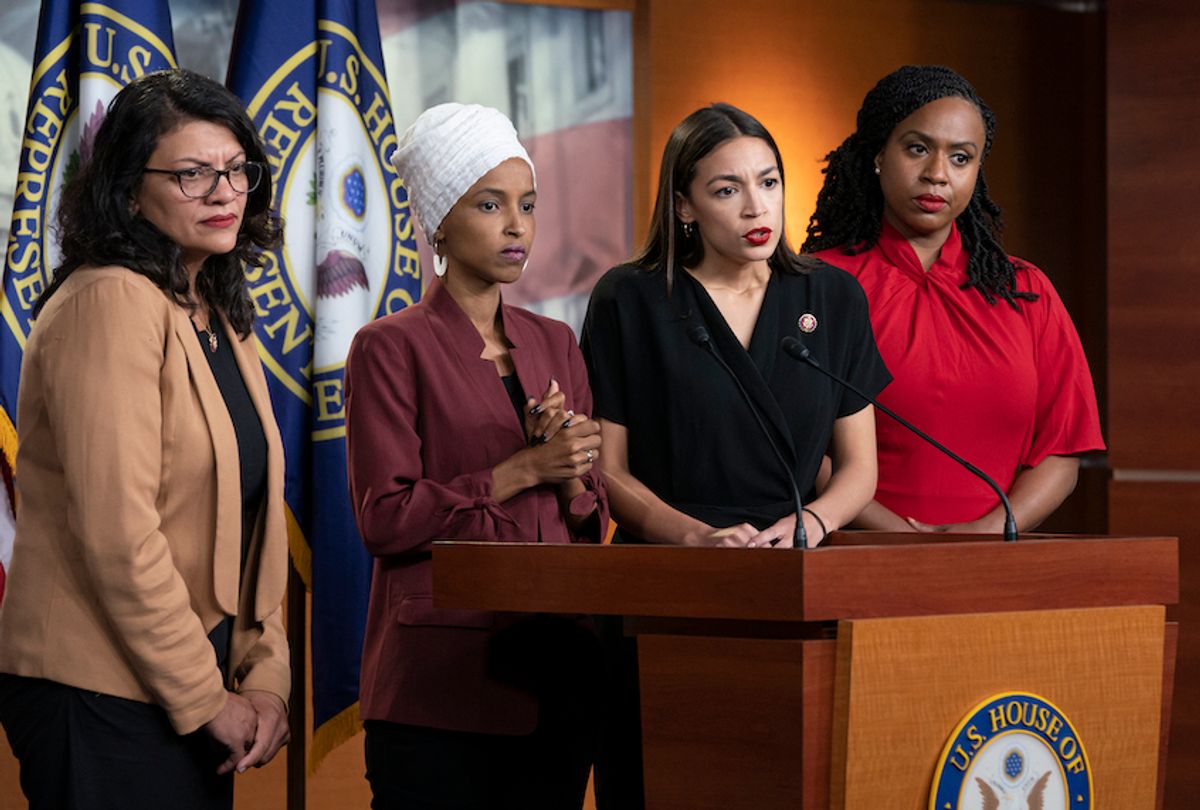 Top leaders of the Illinois Republican Party sought to reverse damage on Sunday after posting a movie-style poster on Facebook that depicted four progressive congresswomen who have been repeatedly attacked by President Donald Trump in recent days as "The Jihad Squad."

The poster, whose image was reportedly uploaded to the Facebook account of the Republican County Chairmen's Association of Illinois on Friday night, displayed images of the four newly elected congresswomen of color — Democratic Reps. Alexandria Ocasio-Cortez of New York, Rashida Tlaib of Michigan, Ilhan Omar of Minnesota and Ayanna Pressley of Massachusetts — who are often nicknamed "The Squad." It showed the lawmakers in film-style action poses with a smiling Pressley aiming a gun and Ocasio-Cortez donning a red evening dress that was on fire. Omar is seen pursing her lips and Tlaib is screaming.

"Political Jihad is their game," the poster read. "If you don't agree with their socialist ideology, you're racist."

The post also displayed the logo of the Republican County Chairmen's Association.

In a follow-up post shared to Facebook Sunday night, the organization's president, Mark Shaw, chairman of the Lake County Republican Central Committee, said the image's posting was "not authorized by me" and that he was "sorry if anyone who saw the image was offended by its contents." He did not apologize outright for the image.

Shaw then explained that the group has a "multi-stage, approval process for all social media posts on any of the RCCA's social media properties." That process, he said, is being "reevaluated."

He said the post had been deleted and went on to lament that it was "unfortunate distraction from the serious debate surrounding the policies advocated by these four socialist members of the United States House of Representatives of which I strongly disagree."

Shaw's post came hours after a host of Illinois Republicans denounced the image.

Cook County Republican Party Chairman Sean Morrison said in a statement that he was "appalled" by the association's recent post and their "use of hateful rhetoric."

"There are civil ways to express political differences that do not involve going to racist extremes," he said. "The Illinois Republican County Chairman's Association's post only serves to further the hateful divide within our country, when we should instead strive for an intelligent, civil and thoughtful discussion of the philosophical differences between Republicans and Democrats."

The controversy comes as Trump has steadily escalated his incendiary criticism of the four high-profile lawmakers over the past week, since initially tweeting last week that the congresswomen should "go back and help fix the totally broken and crime infested places from which they came."

Trump initially defended his tweet, arguing it was not meant to be racist. He then continued his verbal volleys at a campaign rally on Wednesday in North Carolina, during which he criticized Omar as the crowd chanted, "send her back," even after the House of Representatives voted Tuesday on a resolution condemning the president over his comments.

The president told reporters on Thursday that he disagreed with the chants, only to defend the rally-goers as "patriots" one day later.

Trump continued to take aim at the congresswomen on Sunday, writing on Twitter: "I don't believe the four Congresswomen are capable of loving our Country. They should apologize to America (and Israel) for the horrible (hateful) things they have said. They are destroying the Democrat Party, but are weak & insecure people who can never destroy our great Nation!"