Republican who defended president in front of Mueller is up for a Trump administration post: report 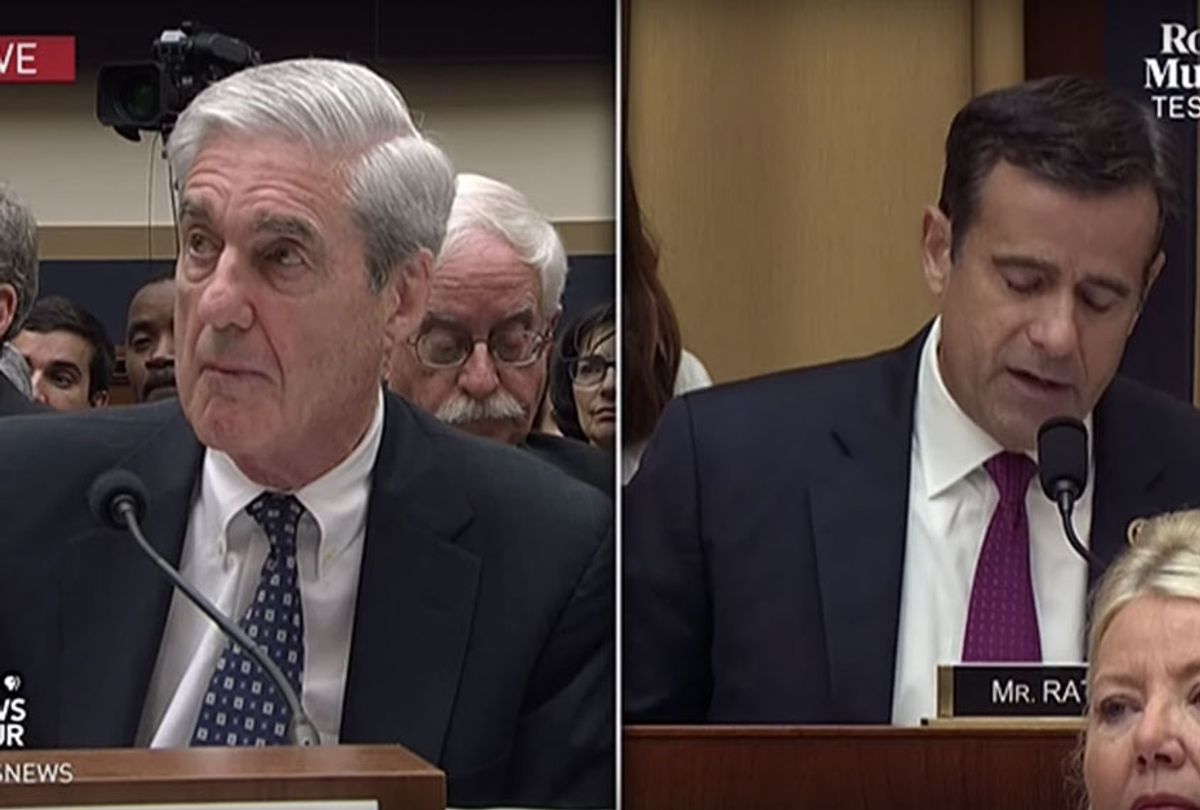 Rep. John Ratcliffe, R-Texas, used his five minutes of questioning during the testimony of Robert Mueller on Wednesday to claim the former special counsel treated President Donald Trump unfairly when he wrote in his report that he had not exonerated the commander-in-chief.

Ratcliffe, a former prosecutor who has reportedly been under consideration for a job in the Trump administration, pressed Mueller about why his report did not exonerate the president. He asked the former special counsel to cite another example of the Department of Justice (DOJ) declining to file charges against an individual while stating the investigated person had not been exonerated of a crime.

"Which DOJ policy or principal sets forth a legal standard that an investigated person is not exonerated if their innocence from criminal conduct is not conclusively determined?" Ratcliffe asked Mueller. "Can you give me an example other than Donald Trump when the Justice Department determined that an investigated person was not exonerated because their innocence was not conclusively determined?"

"This is a unique situation," Mueller said, adding that he could not name such an earlier situation.

Ratcliffe interjected, declaring: "You can't find it because — I'll tell you why — it doesn't exist."

"Respectfully, director, it was not the special counsel's job to conclusively determine Donald Trump's innocence or to exonerate him, because the bedrock principle of our justice system is presumption of innocence. It exists for everyone," Ratcliffe continued, raising his voice. "Everyone is entitled to it, including sitting presidents."

"Donald Trump is not above the law," Ratcliffe argued. "But he damn sure shouldn't be below the law."

Mueller has repeatedly cited guidelines from the Justice Department Office of Legal Counsel (OLC), which prevent a sitting executive from being indicted, to explain his decision to not exonerate the president.

CNN reported Wednesday that Ratcliffe's argument was previously made by Emmet Flood, the former White House lawyer who oversaw the Trump administration's response to the special counsel's probe, to Attorney General William Barr following the release of Mueller's report. "Ratcliffe speaks with the president often, and Trump is a big fan of his," the news outlet added.

Maggie Haberman, a reporter for the New York Times, tweeted Wednesday that Ratcliffe met with Trump last week to discuss replacements for Director of National Intelligence Dan Coats, suggesting Ratcliffe's fiery line of questioning could have been influenced by more than Mueller's prosecutorial decisions. Trump also met with Rep. Devin Nunes, R-Calif., the top Republican on the House Intelligence Committee, to discuss replacements for the country's intelligence chief, according to Politico.

In response to Ratcliffe's questioning, Neal Katyal, an attorney who served as acting solicitor general under President Barack Obama and drafted the special counsel regulations under which Mueller served, wrote on Twitter: "Ratcliffe dead wrong about the Special Counsel regs. I drafted them in 1999. They absolutely don't forbid the Mueller Report. And they recognize the need for a Report 'both for historical purposes and to enhance accountability.'"

Republicans and Democrats on Capitol Hill have expressed frustration over the former special counsel's refusal to reach a conclusion on alleged obstruction of justice by the president. Democrats believe Mueller's conclusion would help them decide whether to launch an impeachment inquiry against Trump, while Republicans see believe the answer would help fuel their assertions that Mueller's probe was illegitimate and politically motivate.

Following the release of Mueller's report, Barr and then-Deputy Attorney General Rod Rosenstein reviewed the evidence laid out by Mueller examining obstruction and determined it was insufficient to accuse Trump of criminal wrongdoing. In May, Barr even broke with Mueller, stating that he"personally felt he could've reached a decision" on obstruction.

"The opinion says you cannot indict a president while he is in office," Barr said, referring to the longstanding DOJ policy. "But he could've reached a decision whether it was criminal activity, but he had his reasons for not doing it, which he explained."

Trump has praised Barr's conclusions, which he called "complete and total exoneration."

Mueller is testifying publicly before Congress about his nearly two-year investigation into Russia's interference in the 2016 election, alleged ties between Trump's campaign and Moscow and whether the president obstructed justice.

He concluded there was no conspiracy on behalf of the Trump campaign to coordinate with Russia to influence the outcome of the 2016 election. He also did not reach a conclusion on whether the president had attempted to obstruct justice, though he detailed at least ten instances of possible obstruction by the president in his report. Mueller did not exonerate Trump, and pointedly said he would have exonerated the president if he could have.

Wednesday's hearing marks Mueller's first public appearance related to his investigation since delivering his 10-minute statement on May 29, during which he detailed his findings and explained his decision not to reach a conclusion on whether Trump obstructed justice. He is scheduled to testify publicly for three hours before the House Judiciary Committee, then before the House Intelligence Committee.

Reluctant to appear publicly before the panels, Mueller is appearing after being subpoenaed.

Watch the full exchange between Ratcliffe and Mueller here: