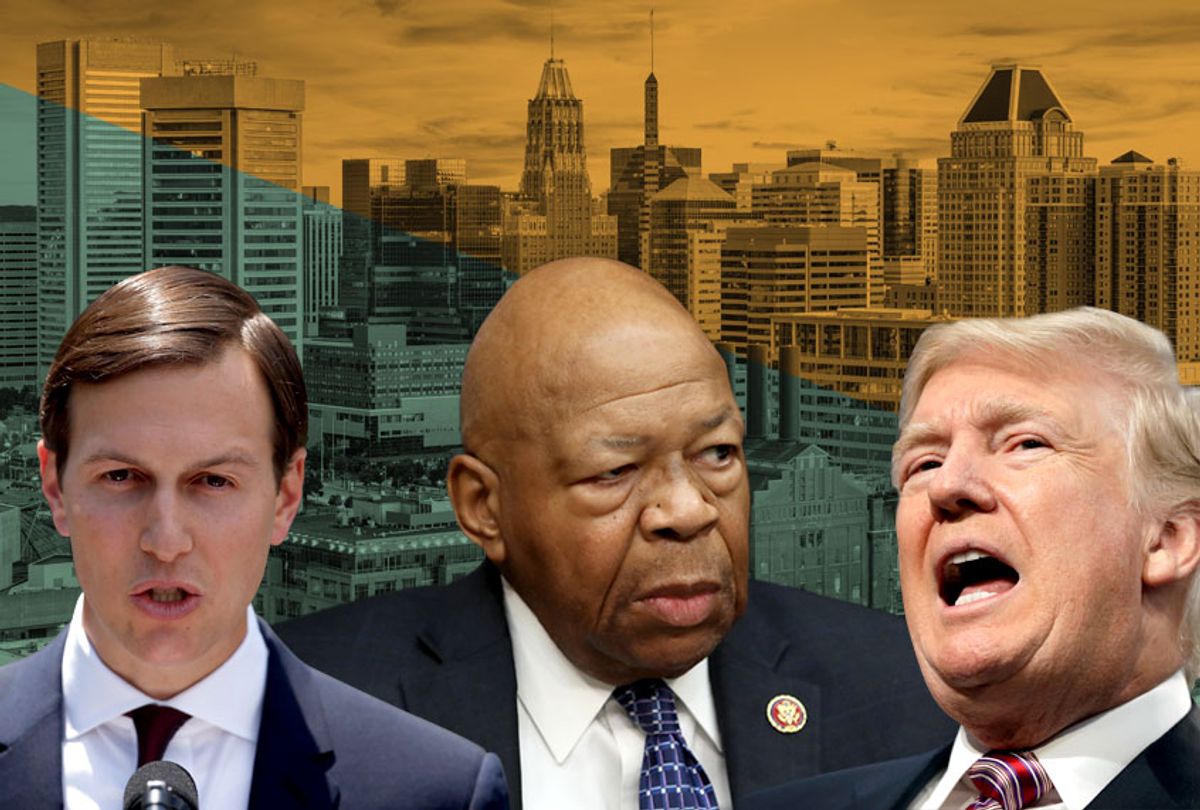 President Donald Trump courted controversy this weekend with a flurry of racist tweets describing Baltimore as "a disgusting, rat and rodent infested mess." It turns out that Jared Kushner, the president's son-in-law who works alongside the commander-in-chief at the White House, owns property in the Maryland city with a history of actual rodent problems, according to a pair of investigations.

"It is certainly ironic that the president’s own son-in-law was complicit in contributing to some of the neglect that the president purports to be so concerned about," Baltimore County Executive John A. Olszewski Jr. told the Washington Post on Saturday.

The paper reported that "in 2017, Baltimore County officials revealed that apartments owned by the Kushner firm were responsible for more than 200 code violations, all accrued in the span of the calendar year. Repairs were made only after the county threatened fines, local officials said, and even after warnings, violations on nine properties were not addressed, resulting in monetary sanctions."

Indeed, a joint investigation by the New York Times and Pro Publica published in May of 2017 found that sub-standard conditions were a major problem in Kushner's properties, including problems with rodents:

At Essex Park, east of the city, Marquita Parmely, the truck driver, told me she had a mouse infestation that was severe enough that her 12-year-old daughter recently found one in her bed. Parmely also has a 2-year-old with asthma, which is aggravated by allergens in mice droppings. She moved her own bed and other furniture away from the walls to dissuade mice, kept the family’s laundry in tote bags after mice started appearing in the hamper and vacuumed twice a day.

There were also complaints about maggots coming out of a living room carpet, raw sewage flowing out of a sink, black mold exacerbating a child's asthma so severely that he was hospitalized twice and a refrigerator not working for so long that a family had to survive "on canned food and boxed milk."

Kushner Cos. owns almost 9,000 rental units at 17 complexes in Maryland, with most of those located in Baltimore County, according to the Baltimore Sun. In addition to the controversy over the poor living conditions, Kushner Cos. was also found by a Sun investigation to be "the most aggressive in Maryland in using a controversial debt-collection tactic." The company reportedly used various corporate entities to arrest more than 100 former tenants for failing to appear in court regarding accusations that they had not paid off their debts, with judges awarding a total of $5.4 million against tenants who owed an average of $4,400.

On Saturday, Trump posted a series of tweets insulting Cummings by writing that the civil rights icon "has been a brutal bully, shouting and screaming at the great men & women of Border Patrol about conditions at the Southern Border, when actually his Baltimore district is FAR WORSE and more dangerous. His district is considered the Worst in the USA. As proven last week during a Congressional tour, the Border is clean, efficient & well run, just very crowded. Cumming District is a disgusting, rat and rodent infested mess. If he spent more time in Baltimore, maybe he could help clean up this very dangerous & filthy place."