Voters — and even candidates — are ready for big steps to redeem our democracy. Why won't the pundits allow it? 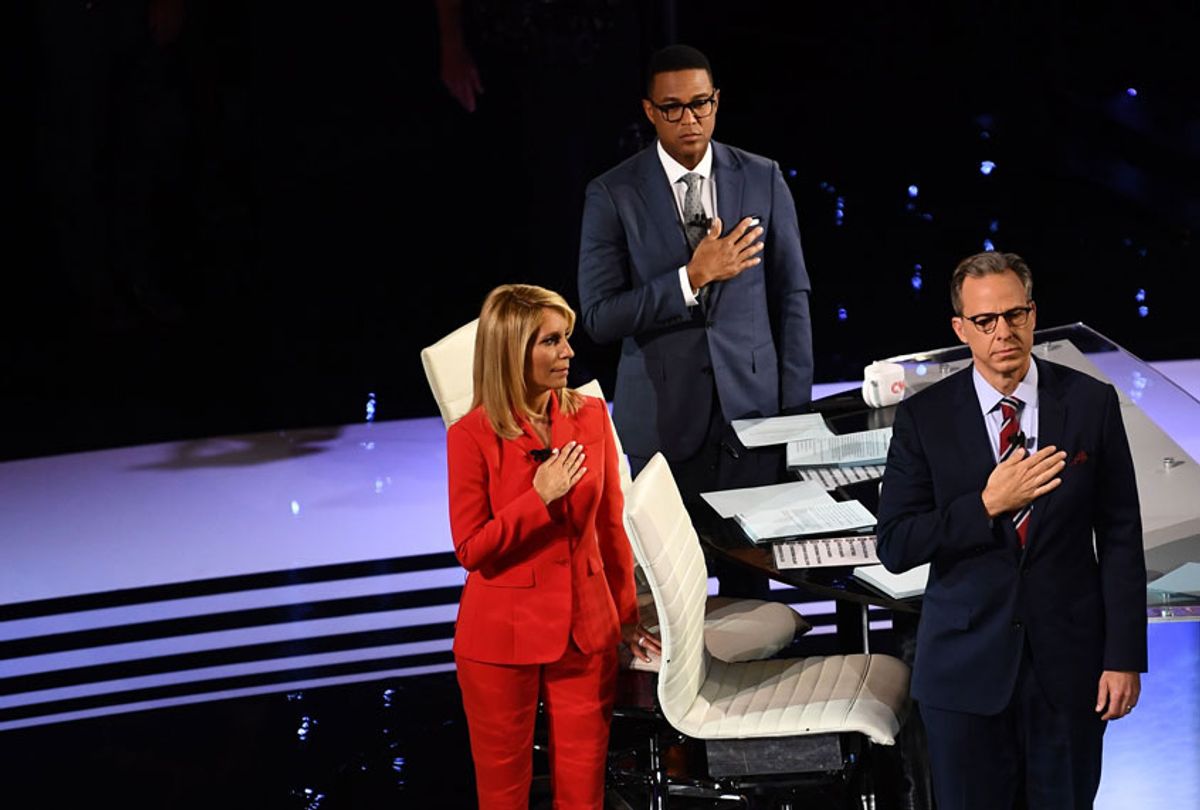 It’s one of the most gerrymandered states in the country. And last November, Michigan voters did something about it. An overwhelming majority — more than 61 percent, Democrats, Republicans and independents alike — stripped lawmakers of the ability to draw their own districts and gave the power to a nonpartisan citizen commission.

On Tuesday morning, as 10 Democratic presidential candidates prepped for the second round of debates in Detroit, Republicans funded in part by a group led by former Wisconsin Gov. Scott Walker filed suit in a Michigan federal court attempting to block the commission’s implementation before citizens drew a single line.

Then on Tuesday evening, once again, CNN’s Jake Tapper, Don Lemon and Dana Bash failed to ask the candidates a single question about voting rights or democracy reform.

This is journalistic malpractice. There have now been 24 Democratic presidential debates or forums since John Roberts’ Supreme Court hollowed out the enforcement mechanism at the heart of the Voting Rights Act in its 2013 Shelby County v. Holder decision. Donald Trump and Hillary Clinton faced off in three presidential debates.

There have been no questions about voting rights in any of them. That’s right: zero for 27. Not even a “show-of-hands” question. (Republicans ought to be asked about the state of democracy as well; I can’t find a question about gerrymandering or the Shelby case in any of the 12 GOP debates in 2016 either.)

Our media must do better. In 2016, moderators asked endlessly about Hillary Clinton’s emails. This year, Democratic candidates have been asked whether nominating a socialist would re-elect Donald Trump.

No one has asked about how we end partisan gerrymandering, about the impact of voter ID on communities of color, or about whether we should rethink the Electoral College. Nothing about the population shifts that have made the U.S. Senate so dramatically unrepresentative.

And nothing about how we might restore the protections gutted by the chief justice in Shelby County at a time when dozens, if not hundreds, of new barriers to the vote have been constructed in states and localities, especially across the South.

CNN’s refusal to pose any of these questions over almost three hours of debate on Tuesday — while offering plenty of cheap conflict by asking candidates with zero percent support to assess the plans and prospects of the frontrunners, while a split screen displayed live reaction shots — may have been the media’s latest failure. It was the hardly the worst.

That award goes to NBC and MSNBC, whose five moderators at the Miami debates last month (Rachel Maddow, Chuck Todd, Savannah Guthrie, Jose Diaz-Balart and Lester Holt) managed to ignore electoral reform and democracy issues — even though those debates came the evening before and the evening after two epic Supreme Court decisions, one that slammed the federal courthouse doors to all partisan gerrymandering claims and another that pumped the brakes on adding a citizenship question to the 2020 U.S. census.

It’s not that these debates have been entirely frivolous. There have been important discussions about health care, climate change and abortion, among other crucial topics. Informed, thoughtful candidates have offered detailed plans. None of them, however, stand a chance of being enacted until we fix our democracy.

Voters know this. Even Utah — Taylor-Swift-lipstick-red Utah — passed a redistricting reform initiative in 2018, as did overwhelming majorities in four competitive, purplish states: Ohio, Michigan, Missouri and Colorado. Maine voters enacted ranked-choice voting and changed the very way they choose their leaders. Sixteen different democracy measures were on the ballot in 2018; 15 of them passed.

Candidates get it. The very first bill taken up by the new House majority this winter was a robust package of democracy reforms. Twenty-four Democratic presidential candidates have signed the National Democratic Redistricting Commission’s anti-gerrymandering pledge, vowing to “support fair redistricting that ends map manipulation and creates truly representative districts.”

During Tuesday’s debate, after Democrats parsed the details of their immigration plans and the finer points of the different Medicare for All proposals, after serious and sober-minded dissections of gun control plans that, as Ezra Klein noted, stand no realistic chance of surviving the filibuster or an imbalanced U.S. Senate, let alone a polarized Supreme Court, Pete Buttigieg, unasked, brought up the elephant in the room.

“When I propose the actual structural democratic reforms that might make a difference — end the Electoral College, amend the Constitution if necessary to clear up Citizens United, have D.C. actually be a state and depoliticize the Supreme Court with structural reform — people look at me funny, as if this country was incapable of structural reform,” the South Bend, Indiana, mayor said. “This is a country that once changed its Constitution so you couldn’t drink and changed it back because we changed our minds. You’re telling me we can’t reform our democracy in our time? We have to, or we will be having the same argument 20 years from now.”

Voters might be ready — but will the journalistic gatekeepers allow it? If so, when?

NBC and MSNBC wouldn’t bring up gerrymandering on the very day that the Roberts court overrode a chorus of federal judges who had halted both Democratic and Republican gerrymanders in Maryland and North Carolina, as well as in Ohio, Michigan and Wisconsin.

CNN didn’t ask about it last night in Michigan, a state where Democrats have failed to take the state house all decade despite consistently winning more votes than Republicans; at a debate 68 miles from Flint, where a gerrymandered state legislature helped create the sickening water crisis by overriding an citizen initiative and reinstating an emergency manager act that voters had repealed; on the very day that Republicans sued to block a citizen commission that a supermajority of voters had approved to take their government back from entrenched partisans.

CNN gets a second chance — at least the media’s 28th such opportunity overall — in Detroit on Wednesday night. It’s long past time for them to do their jobs. It’s only representative democracy that hangs in the balance.